Prejudices and Being a Gardener

Photographs to illustrate the article published in The Mediterranean Garden No. 103, January 2021

John Harwood greatly enjoyed Caroline Harbouri’s observant and outspoken ‘Prejudices and Pride’ (TMG 99). Many of her prejudices happen to chime with his own. He writes:

However much I admire the skill of landscape architects, to me the concept of getting someone else to ‘do’ your garden is anathema. The abiding charm of a garden is that it is continually evolving, often in unexpected ways; it can never be said to be ‘done’. We seek to shape it as a beautiful space which appeals to all the senses, our senses, and in that quest our prejudices are an essential input. There is no need to apologise for them. 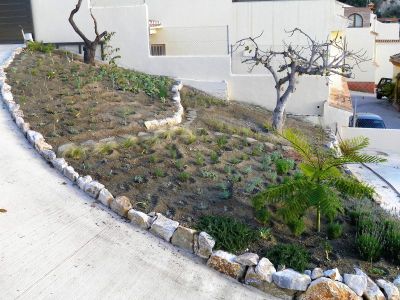 John’s garden newly planted in December 2017: The trees are an ancient plum (now removed), a fig (very productive) and a Schizolobium parahyba (which failed)

To state the obvious, colours are important: my colour preferences are a defining characteristic of me. This cannot be dismissed as a mere prejudice. My favourite colour is white, in all its many shades. It is the most expressive and varied colour, from the purest, shining white of Rosa rugosa ‘Alba’, some cistuses and lilies too, to the softest whites in old-fashioned roses. The rest of the spectrum is a playground – from the blue touch in a flower of Capparis orientalis (syn. C. spinosa var. inermis) – or is it just the haze of those stamens? – to that mere blush of heat in the Dianthus anatolicus that are looking at me now. Then, as white shades toward yellow, at what point does it become a cream? Silly semantics. 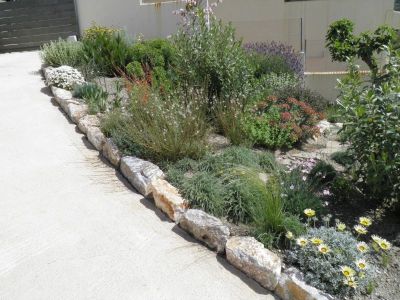 The palette in my garden is white, blue, and yellow – the whites include whites, the blues include lavenders, the yellows include creams – and pink. Pink is dangerous territory, as pink ranges from truly exquisite to utterly repugnant. I have felt that orange is a difficult colour to live with, although a range of orange flowers such as Clivia and Hemerocallis, not to mention Pyrostegia venusta, do merit a place in the garden. Caroline Harbouri longs to have Thunbergia gregorii; it is indeed a striking plant, yet I would opt for the white cultivar of Thunbergia alata. Above all, red needs to be reserved for an isolated, bold statement, perhaps a Delonix regia or a Brachychiton acerifolius. I don’t like plants that shout, “Look at ME!”, so the violent geraniums (properly speaking pelargoniums), poinsettias like a tart’s lips, and brash bougainvilleas, all of them so popular here in Spain, have no place in my paradise. 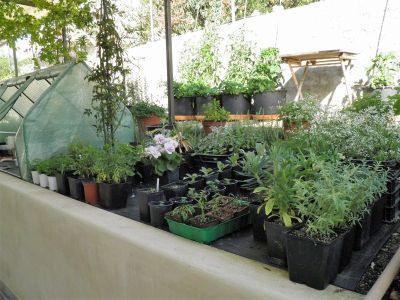 John has propagated, from seed or cuttings, 90% of the plants in the garden

The Mediterranean is the temple of scent in the garden. Locate smelly plants where you can caress them – Artemisia, Clinopodium nepeta (syn. Calamintha nepeta), rosemary (my smelly favourite is Rosmarinus officinalis ‘Sappho’), Satureja thymbra, thyme (for scent I would choose Thymus mastichina). Pelargonium crispum will have to be in a pot on the terrace. Zaluzianskya capensis is a lovely, soft-scented evening flower it (just happens to be white) which self-seeds prolifically yet is easily managed. I have planted some Nardo bulbs, now renamed Agave amica, and am eagerly awaiting their lusciously scented blooms. Most jasmines I find cloying, too much of a good thing. That is also true of citrus blossom; the scent of one tree is heady, the scent of a landscape of citrus trees is sickly. 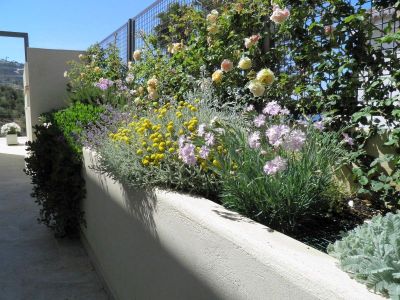 Robin Lane Fox in his Financial Times column describes Aucuba japonica as “a plant that looks as though the cat has been sick on it”. I could not have put it better myself; it looks diseased, it is an irredeemably ghastly plant. If only that disease were terminal… I would extend that dislike to almost any variegated plant, yet Cornus controversa ‘Variegata’ deserves to be excused. I have the same dislike of trees and shrubs with appendages such as ‘Aurea’ or ‘Purpurea’ to their name. Why can’t we leave them be and enjoy their natural beauty? That said, I would have to make an exception for Gleditsia triacanthos ‘Sunburst’. 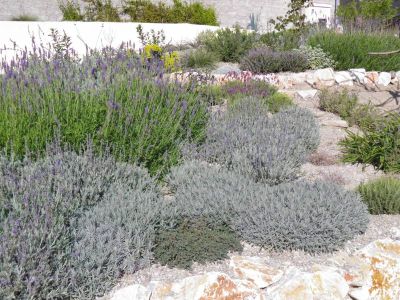 In this climate, succulents are an obvious choice. Unfortunately, I am not comfortable with cacti in the garden however beautiful, interesting and varied they may be. Could that be because they are so static, rigid? I share Caroline Harbouri’s dislike of agaves yet would have to make space for an Agave attenuata in the hope that, one day, I might be treated to its spectacular flowering. There are broader concessions too: euphorbias, for example, particularly Euphorbia rigida, a gem with its blueish leaves and lime-green flowers in spring, and Euphorbia graminea ‘Glitz’, which is a froth of tiny, delicate white flowers virtually throughout the year. I have seen it compared to the Gypsophila calledBaby’s Breath. Well, I can forgive most things, but that must be the odds-on favourite for the most nauseating plant name ever contrived. 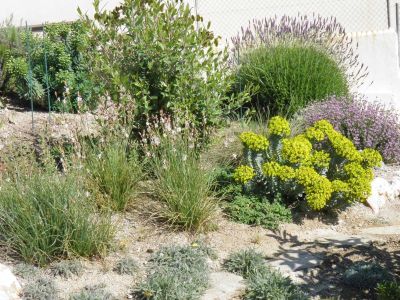 I do have a soft spot for aloes, having grown up on a farm near Lydenburg on the Eastern Escarpment in what is now Mpumalanga. There were mountainsides of aloes and aloe honey was a local delicacy. I was small, the dominant species were tall, perhaps Aloe marlothii? This year I have sown seed of Aloe barberae, A. ferox, A. marlothii, A. striata and A. striatula (the latter three from the MGS Seed Exchange) and have fifteen plantlets ready for potting on. 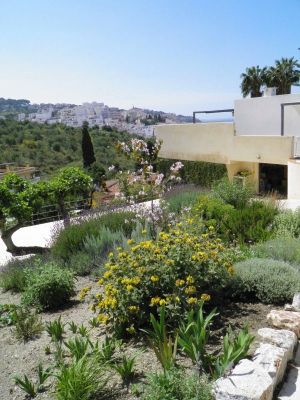 View to the south, Bauhinia variegata and Phlomis fruticosa in flower

Another quest of mine is to acquire Euphorbia lydenburgensis; it may be cactus-like, even nondescript, but it has become a vocation. My new pride is to achieve a flowering echium spire. I have tried, and failed several times with Echium pininana, which seems to be a thirsty plant. I have also failed with Echium wildpretii, in that case I suspect the seed was not viable. So, this year, I am trying two cultivars, Echium ‘SnowTower’ and Echium ‘Pink Fountain’, which seem to be more robust yet still have to be watered diligently. 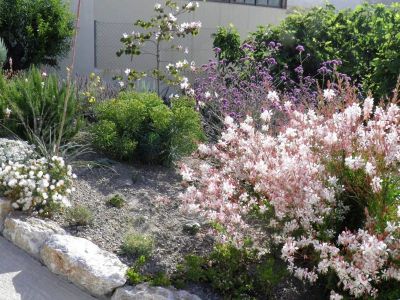 In every garden, particularly a new garden, there are bare patches, for instance as we wait for a shrub to fill its allotted space. For many years I have had fun and success scattering seeds, easy seeds, to furnish those gaps. However, this is the third summer when my sowing of simple subjects like Centranthus ruber, Daucus carota, Eschscholzia californica, Oenothera, nasturtium and so on has met with a consistently spectacular lack of success. I sowed them following my prejudice, reinforced by the instructions on the packet, that they should be sown in the spring. As I write, it is early June, I see Daucus carota popping up happily in what I rather grandly refer to as the orchard, in reality an area which is largely left alone. Yet not one of ‘mine’ is to be seen. Why would that be? 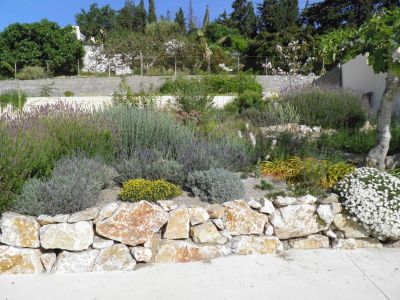 In a ‘Road to Damascus’ moment, the answer came to me. Annual seeds need to be sown at the start of the annual growing cycle. Obvious? In temperate climes that is in the spring but in mediterranean climates it is in the autumn, October/November, when growth begins. It is not surprising that nothing germinated when it had been sown at the onset of the summer dormancy. My theory will be put to the test this autumn. If proven, it offers a logical answer to many a question about when to tackle a whole range of gardening tasks. A prejudice purged. On the Road to Damascus Saint Paul came to reject conventional, entrenched ideas. The Scriptures are silent on the subject of Saint Paul’s gardening skills.