For so many years Sally Razelou worked tirelessly to develop Sparoza as a waterwise garden in keeping with its environment as well as a place of great beauty. Following a request from members, the MGS has set up a Sally Razelou Memorial Fund to celebrate her life and preserve her legacy. The Fund will be used exclusively for the garden of Sparoza and all that pertains to it, not for the upkeep of the house.

Those who would like to remember Sally and her work in this way should contact the MGS Treasurer, Jill Yakas, at mgssrmf@gmail.com, who will advise them about methods of making a donation.

The photo at the top of this page shows Sally Razelou at Sparoza. This photo and the others on this page are from Sally Razelou’s family and friends.

Sally Razelou, the Custodian of the garden of Sparoza, died peacefully at home on the 2nd of March.

Caroline Harbouri, friend and gardening companion of 30 years writes here about the remarkable life and legacy of Sally Razelou. At the bottom of this page there are links to some articles written by Sally for The Mediterranean Garden journal.

Sally was born in what was then called Burma. Her father, W.E.V. Abraham, known as Weva, came from a long line of Ulster Plantationists, while her mother, Susan Jean Bidwell, was an American from Kansas. Sally spent the first seven years of her life in Burma but during the war years was safely in Kansas with her mother, brother and sister. 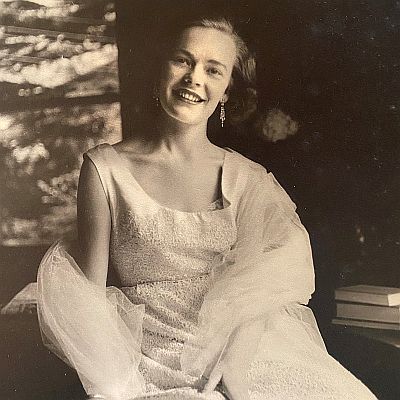 Back home again in the happiness of peace but also the rather grim conditions of post-war Britain, Sally was sent to Cheltenham Ladies’ College and then went on to university, to Trinity College Dublin, where she received a degree in History and Political Science in 1954. Before she graduated, however, in 1952 she married Peter Jury. 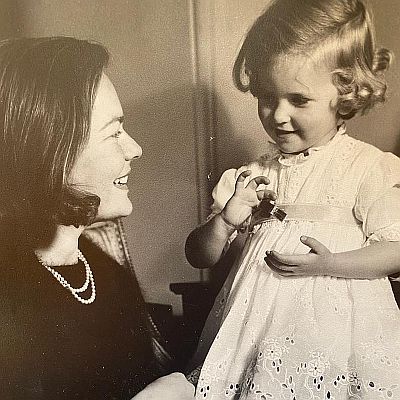 Sally with her daughter Sophie as a baby in 1963

Some time later, in 1967, they acquired a house in Ireland with a two-acre garden that had gone to rack and ruin – and it was here that Sally’s serious life of gardening began. Painstakingly and lovingly, she set about recreating and replanting this garden. Several times when discussing plants with me she compared the behaviour of a particular species in her Irish garden and in the Mediterranean. Her memory for detail and her powers of observation were keen. I regret never having asked her how, having gardened in the moist conditions of Ireland, she became so expert in dry-climate gardening.

Sally and Peter travelled widely but her close contact with Greece started in 1971 when they bought a house on the Greek island of Syros. She was already beginning to observe, and learn from, the Mediterranean flora. 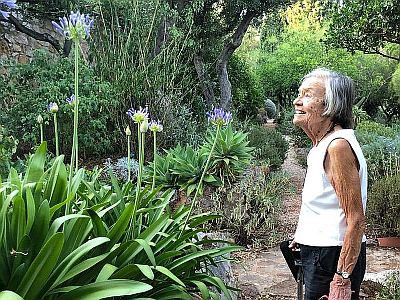 Sally in the garden at Sparoza with Agapanthus

Sally settled in Greece in 1974 and subsequently married Nikos Razelos. For a few years they had a small “zoo” or collection of animals in Kifissia, including some monkeys, a chimpanzee and a famous lion, acquired by Nikos from London Zoo. I seem to remember they had a python too, for it was then that I first encountered Sally. It was after this little zoo was disbanded due to her husband’s ill health, and new homes found for the animals, that Sally began to make her remarkable pictures, created from the pressed petals, leaves and other parts of plants, a form of art with a long history, dating back to the Japanese Oshibana. 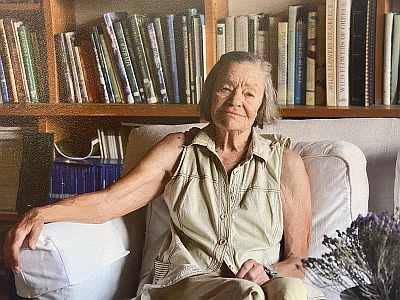 Sally in the house at Sparoza

Sally came to Sparoza in 1992, just under a decade after Jaqueline Tyrwhitt’s death. The garden had been ticking over but was crying out for an expert gardener’s care. Jaqueline Tyrwhitt, who created and laid out the garden of Sparoza in the 1960s, had pioneered in Greece the use of drought-tolerant plants from mediterranean-climate regions as well as the inclusion in the garden of indigenous wild plants, Sally intuitively understood this legacy. She worked with the publisher, Denise Harvey, on the posthumous publication of Tyrwhitt’s book Making a Garden on a Greek Hillside and wrote a Preface to it. 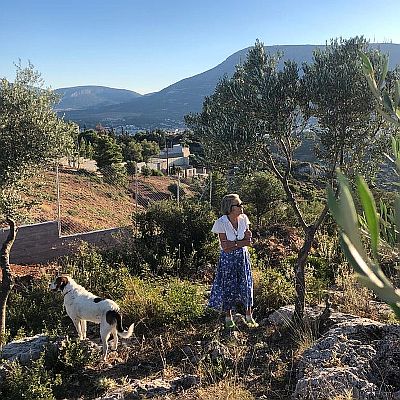 Sally on the Hillside

Over the 30 years that she spent at Sparoza Sally worked steadily and quietly – always quietly and without fuss – to expand and develop the garden in this spirit. She created the path on the hillside that lies above the garden to the north in order to bring it into the garden, planting trees there with Jennifer Gay’s help and many small geophytes. She developed the phrygana area to the south of the garden, making paths here too, working with the regular volunteers to get rid of the all-encroaching asphodels and experimenting with plants that could thrive in the very tough conditions of this area. 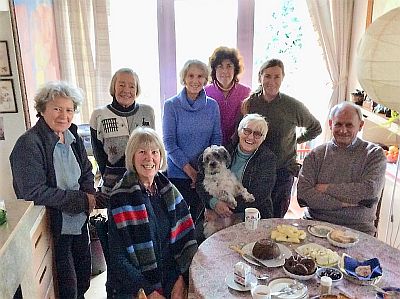 Sally with the ‘Vollies’ group of volunteers at Sparoza

The principles on which Sally ran Sparoza were clear: no use of pesticides or artificial fertilisers; very sparing use of water to some parts of the garden, while other parts remained completely unwatered; propagation in the nursery of plants that prospered. Experimentation with plants was key to making Sparoza a climate-compatible garden, turning it into a most valuable model in these days of climate change. Sally took this seriously and stuck to her principles without wavering; I remember, for example, how in a summer of exceptional drought when old rosemaries in an unwatered part of the garden were dying she sternly refused to be tempted into giving them water. This takes courage and an iron will. 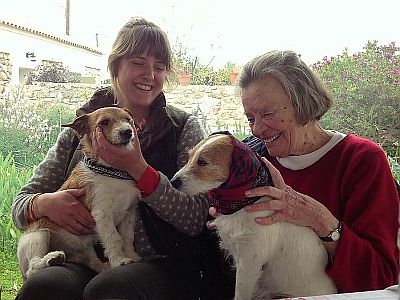 Sally had a sense too of the frugality that belongs to a climate-compatible garden. Many of those managing a garden of similar size would be surprised to know how little was spent on Sparoza; certainly Sally sometimes bought plants when she spotted something that looked likely to be suitable. But to a very large extent plants were donated to Sparoza in that spirit of kinship that characterises gardeners. In the early days several plants came from Heidi Gildemeister, to name but one of the many donors. In a similar spirit Sally held plant sales twice a year, where MGS members could acquire plants propagated at Sparoza for a token sum of money. 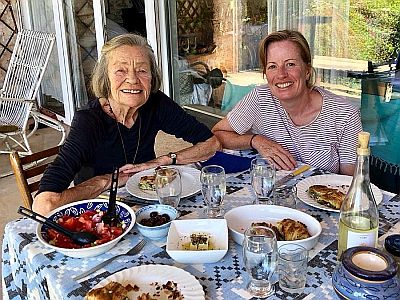 Sally’s daughter Polly predeceased her. She is survived by her daughter Sophie, who looked after her so tenderly in her last days, by her stepson Dimitri whom she felt effectively to be her son, by her much-loved half-sister Niki, by her ten grandchildren and her great-granddaughter. She leaves a sad hole in so many lives… 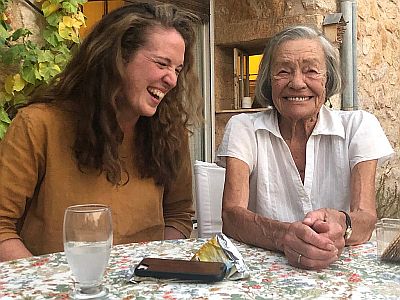 The tomb of Christopher Wren in St Paul’s Cathedral bears an inscription in Latin reading “If you seek his monument, look around you”. I could say the same about Sally: if you seek her monument, go and stand in the garden of Sparoza and look around you.

Selected articles written by Sally for The Mediterranean Garden journal:

Genesis: The Inception of the MGS
Annus mirabilis
Testing Drought Tolerance at Sparoza
A Neglected Genus - Ruscus
On Germanders in the Mediterranean Garden

Head Gardener Lucinda Willan talks here about her first year at Sparoza and her memories of Sally Razelou.