The Garden of the Virgin

Photographs to illustrate the article published in The Mediterranean Garden No. 104, April 2021

John Mole’s book Harley and the Holy Mountain – through the Heart of Greece to its Soul is the story of a road trip with an old 50cc motorcycle on the back roads of Greece to Mount Athos. In this abstract he writes:

Here’s a gardening tip from a monk I met on Mount Athos. “One. The most important is to put an icon of Saint Tryfon in the garden and give him a really good feast day. Two. Rely on God – if one crop is bad he gives you more of something else. Three. Weed by hand and pick off the pests.”
There you have it. Tryfon is the patron saint of gardeners and wine-growers. If you’d like to put in a word for the MGS his feast day is February 1.

On a map of Greece you will see in the north what looks like a stunted hand with three fingers sticking out into the sea. The top finger is the peninsula of Mount Athos. A spine of mountain ridge rises to the bare summit of the Holy Mountain before plunging down to the sea. Watercourses, ravines and valleys run down like ribs on either side. In the west and on plateaux is land for farming. The rest is bare mountain or thick forest, a source of wild food to forage and home to boars, foxes, jackals, wolves, reptiles and birds. 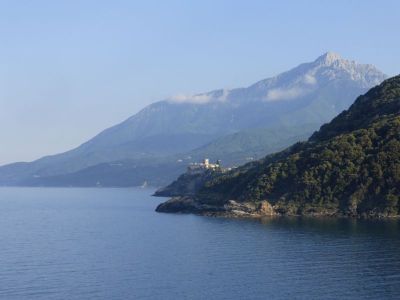 Monastery of Stavronikita with the Holy Mountain in the background

The Autonomous Monastic State of the Holy Mountain is a self-governing state within the Republic of Greece. It has been famous as the spiritual home of Orthodoxy for a thousand years. About half of the 1800 monks live in twenty monasteries and the rest in smaller communities and hermitages. Wonder-working icons and relics are channels to the divine; everyday miracles are part of nature; the marvellous deeds of saints are facts not metaphors. The monks live in a Neoplatonist world, a reflection of a deeper reality. Their faith, their way of life, the strange beauty of the place promise mystery, in the ancient sense of truth beyond comprehension.

Monks are not the only inhabitants. Paid workers live in bothies outside the monastery gates. About 30,000 pilgrims a year get free board for three nights – close on a hundred thousand days of hospitality. They are all men. 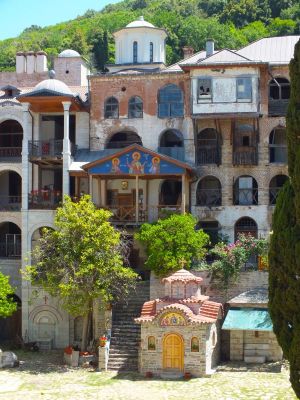 Monasteries have a basic layout. Inside a ring of walls is a stone tower with the treasury and the library, the last refuge against enemies and fire. The focal point is the katholikon, the church, repository of icons and relics. Close by are the refectory and kitchen. In the courtyard a fountain spouts mountain water. The living quarters are single cells for monks and dormitories for pilgrims. Underground is Saint Tryfon’s other realm, the wine cellar. Outside the walls are vineyards, fields of kitchen garden stuff, orchards of domesticated trees. Cliff-top monasteries have flamenco skirts of cultivated terraces.

Beyond the cultivated fields thick forest clothes all but the highest and most precipitous slopes of the mountain. Monks do not eat meat and female animals are banned, with the exception of cats to keep down the mice and hens to give eggs for high days as well as tempera for icon painting. Thus the landscape is free of the flocks of sheep and goats which have scoured hillsides of vegetation and soil in the rest of the Mediterranean. On the secular side of the frontier of Athos the hills are stripped to grey rock and scrub by grazing. On the theocratic side green hills flourish. 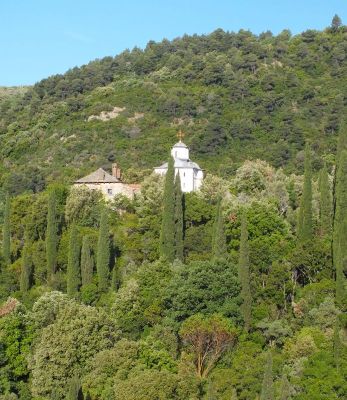 At the beginning of the last century there were up to 10,000 monks. Their numbers shrank until the 1960s. The land they cultivated has been taken over by trees, so that in the middle of the forest one comes across old orchards of olive and other fruit trees gone wild but still a bounty for a foraging hermit. Also, until the 1960s the only way to get around, other than walking, was by mule. Each monastery kept hundreds of animals for transport, transportation and pulling things, which fed on grassland. Since then the animals have been replaced by motor vehicles running on bulldozed roads, abandoning paths and pasture to the forest. Massive oaks and plane trees in dense forest are relics of their younger years in open fields. 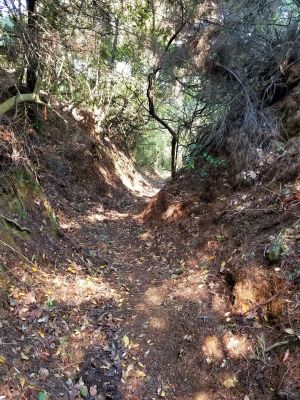 Path through the forest

Athos is often called the Garden of the Virgin – To Perivoli tis Panaghias. There are two words for garden in Greek: kipos is the land around the house decorated with flowerbeds and shady places for a barbie, while perivoli is a more utilitarian plot away from the house for growing food, like an allotment. There may be a few flowers in pots and beds around the monastery courtyard, but not for decoration. A committed ascetic would avoid taking pleasure in them for their own sake but see them as another way of honouring the Virgin. 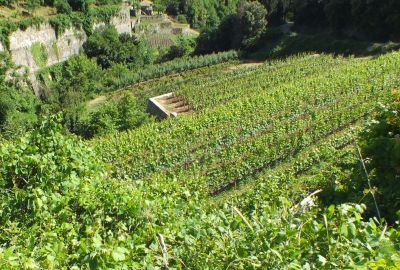 At the monastery of Konstamonitou tending them is clearly not on the roster of duties allocated by the abbot. Non-Orthodox visitors to this monastery are not allowed into the church for services, so for something to do during vespers I earned my keep by tidying up the planters around the church. With my Opinel knife I deadheaded roses, rooted out bindweed and pruned shrubs. I gave it all a good watering from the fountain. It was pleasant work in the late afternoon sunshine, listening to the chanting from an open church window. A bird in the eaves joined in with an exquisite, blackbirdish song, all full of life and praise to touch the heart of an old sceptic. I got an infected finger from a thorn, which I thought was a bit churlish of whoever doles out just deserts. 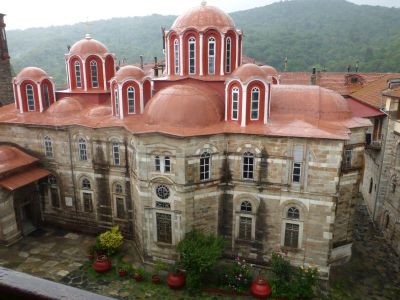 Katholikon and rose beds at the monastery of Konstamonitou 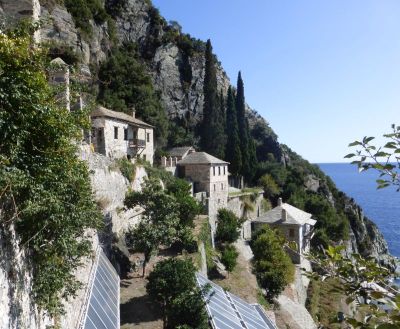 I have been to Athos half a dozen times, three of them for two weeks clearing overgrown paths between monasteries as part of a team organised by FOMA, the Friends of Mount Athos. A typical day starts on a May morning in the crystal light of Greece under a Byzantine blue sky. We follow a FOMA signpost with its striding pilgrim logo past cultivated fields to a steep path up into the forest. It is paved with massive stone slabs and called a kalderimi, fromthe Turkish word for a pavement. Kalderimia (plural) are among the oldest man-made structures on Athos, some of them pre-Christian. According to Herodotus, Athos supported half a dozen cities, one of them with a treasury at Delphi. There was a temple to Artemis and probably one to Apollo and the top of the mountain had a shrine to Zeus. 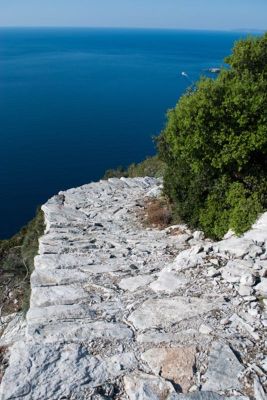 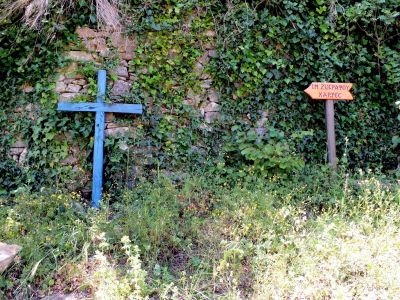 Signs to Holy Monastery of Zografos

At the edge of a noisy stream we start work with shears and loppers under a luxuriant canopy of trees in a soundscape of raucous birdsong. Below us a forested valley, terracotta roofs of monastic cells and chapels among the green, tumbles down to a cobalt sea. Further along the coast reigns the marble peak of the Holy Mountain, for once without its tonsure of cloud. 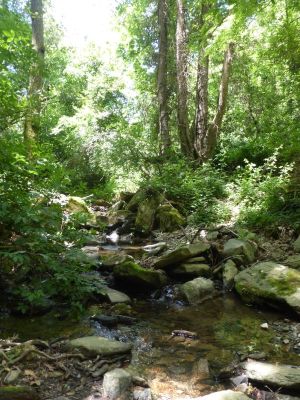 The Garden of the Virgin? The ancient Greek for a royal garden, borrowed from Persian, is parádeisos. Paradise.