The Development of a Garden in Portugal

Photographs to illustrate the article published in The Mediterranean Garden No. 104, April 2021

Johannes Ulrich Urban bought the property with his partner in May 2017 in Portugal on the very south-western tip of Europe. He writes:

We are in the green forested mountains of the Serra de Monchique in the hinterland of the Algarve, the south coast and the west coast of the Atlantic being both about 25km away.

Our home is situated at an elevation of 350m on the south-facing slope of the Foia which at 908m is the highest mountain of the Algarve. The Atlantic can be seen in the distance. The land comprises 1.3 hectares; about half of it is a grove of mature cork oaks (Quercus suber) on the upper part which surrounds the house, while the other half has a gentle slope and was once cultivated land terraced by ancient dry-stone walls.

A feature of the property are the remains of an ancient water mine which provided water for the farm but has unfortunately been dry for a long time and is crumbling. Our neighbour told us that water was still running from this mine when he was a child. The ancient water reservoir is still there. These water mines are a very typical traditional feature here in the mountains of the Algarve and may date from the time when the country was under the rule of the Moors. 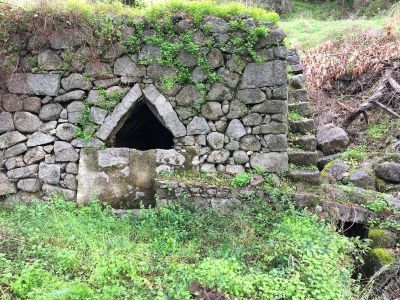 An ancient ‘water mine’ built into the steep slope

The mines are driven horizontally into the bedrock until an aquifer is tapped. The water then flows through a rill on the floor of the mine and is collected in large stone basins; many of these are also carved from the rock at the outlet of the mine though ours was built some distance away. These basins serve as a reservoir and we have seen some filled with magnificent fresh and clean drinking water, often overflowing and channelled into the next garden. I am not really claustrophobic but I could never ever enter such a mine. The shaft in all water mines I have seen is so narrow and low that I am convinced they were built by children in the long-gone past. 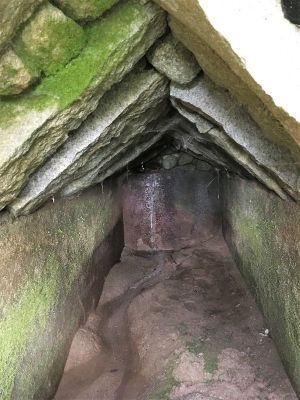 Ancient ‘water mine’ detail. The old reservoir is no longer holding the water, it has cracked and is leaking. But water is still flowering out of the mountain

See also the photo at the top of this page which shows detail of a water mine. The structure is not vaulted but built of large blocks of the local stone. Who did this work?

Our water mine was replaced by a 120m-deep borehole which delivers the same quality of excellent drinking water and almost certainly in a much more reliable way than the old water mine would have done. But there is always the question of how much water there will be in the long run… 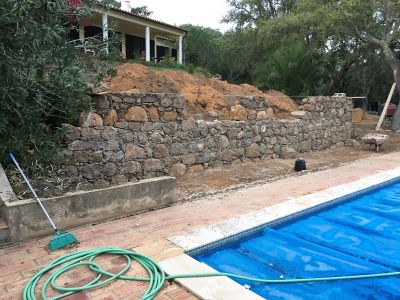 New walls had to be built, the stones were retrieved from a big pile of stone lower down on our land which was an old ruin

Our house is 20 years old and was designed and used as a summer holiday home so there was virtually no garden. On arrival we struggled with the remnants of a very primitive and extremely wasteful irrigation system which used so much water that sometimes our borehole ran temporarily dry, while in other places thorny thickets of brambles thrived on the excess of water. So we used the old local stone from a ruined building at the end of our land to build new retaining walls in order to transform the steep weedy slope between the house and the already existing swimming pool into terraces. This created more space around the house and the pool, a paved terrace and wide new borders. These are gradually being planted after careful soil preparation. 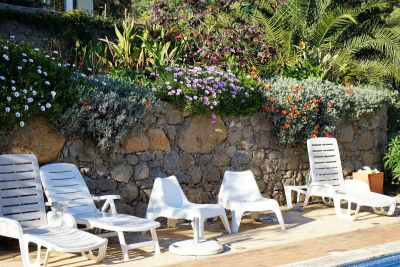 This is how it looked two years later. Flowers soften the hard walls, on top you can see that the formerly open terrace is now a glazed veranda

Our property is entirely walled by ancient dry-stone walls. They are a fairly unusual feature in this area and add a lot of charm as well as giving protection. With this in mind we have used old stones from the ruin for the new walls which means that they blend in nicely with their surroundings. During the process of this work we have gained great respect for Portuguese craftsmanship. We employed two masons for three months who built these walls with their bare hands (never gloves, of course), spirit level and plumbline. Only the very biggest boulders were set in place to the millimetre with a bulldozer. A perfect staircase of raw natural stone is their masterpiece. 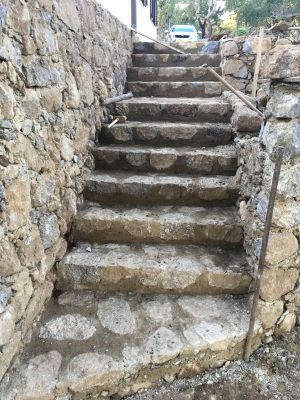 In planning the garden we used as much as possible the existing structure and vegetation, the cork oaks being the dominant feature. In addition we wanted to work with nature rather than against it.
Writing this more than three years after our arrival in Portugal, I can now look back on both failures and successes.

The area around the swimming pool was overgrown and claustrophobic on our arrival — one could hardly walk around the pool. This entire tangle of vegetation was removed and the same masons built yet more walls to retain the slopes behind the pool. This created more wide borders, giving a sense of space. For privacy and as a windbreak we had a trellis installed at the back of the new borders which is now a home for my beloved climbers. The pool is as old as the house and is the typical bright blue — what to do with such a dominating visual impact? 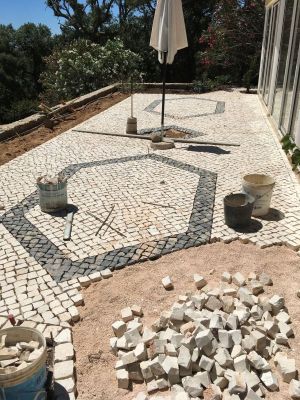 The idea was to soften it with a planting scheme restricted to a harmonising palette of blue and white flowers and green foliage but that was easier said than done… All summer long I have been helped by an Ipomoea alba (syn. Calonyction album) with hundreds of saucer-shaped and -sized scented white flowers at night, sometimes visited by huge moths. But how do I stop Thunbergia grandiflora from escaping from the trellis and invading the neighbouring trees? And why does one new plant outgrow its space immediately at the expense of its neighbours? And why do others not grow at all? All these plants are watered by the efficient new water-saving irrigation close to the house and the swimming pool as they would not grow without water. There is and will be no lawn. 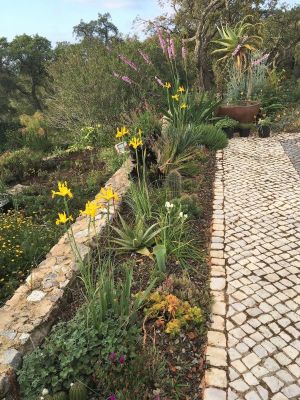 Further away from the house the planting will be more waterwise and here I have to learn to garden under conditions that are new to me. But in this drier situation, although there have been some failures, the first test plants have grown (or survived) much better than expected. This will be a heaven for bulbs, succulents and mediterranean plants in the wider sense. I raise many new plants from seed these days and native plants are being added to the existing ones. 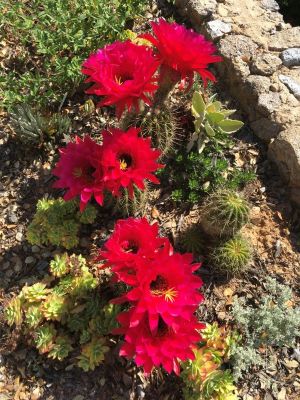 Cacti do very well. This is a Trichocereus hybrid raised from seed, in the succulent and bulb border at the new terrace

Monchique has a typical mediterranean climate, only slightly moderated by the Atlantic and the elevation. Thus there are dry and hot summers and mild and wet winters. Due to the mountain range at our back we get more rain than the coast and the Serra de Monchique serves as the sponge for the Algarve. But local people keep telling us that the amount of rain has diminished markedly over the last years. Despite this the native flora on our land is very beautiful, having its peak flowering around the end of April. 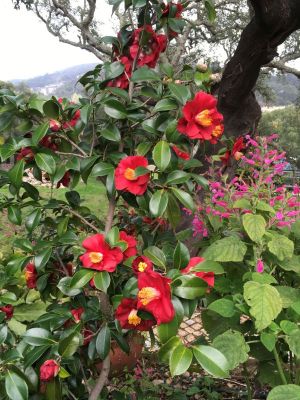 The longer I live and garden with cork oaks the more respect and admiration I have for these trees. They are extremely well adapted to the hot and dry summer months. Even during the hottest time of the year they stand in solid deep green without a hint of stress. We will not take their cork, mainly because this would reduce their fire resistance in the years after stripping. (Fire is a constant risk in summer and we have witnessed devastating wildfires). Their most welcome shade is not at all dark or oppressive; there is always some light filtering through which paints living patterns on the ground. This gives rise to lush undergrowth, both in nature and in managed and irrigated garden settings. Their vertical tap roots go down to incredible depths until they find water and thus do not suppress the undergrowth.  In addition, the many tough leaves form a thick natural mulch under the trees. Cork oaks do not grow everywhere but when happy they are majestic trees and their saplings are being encouraged in the right places. 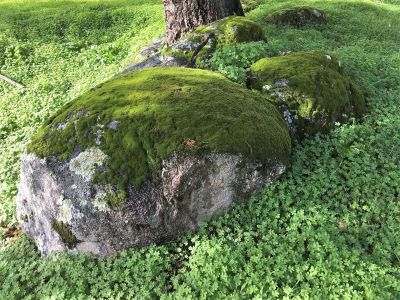 Rocks, moss at the base of a cork oak after the first autumn rain

All this was written on a nice Sunday morning in autumn still fresh from the first good rain. The garden looks so different after rain…