Lunching in Malibu with the Natives

Photographs to illustrate the article published in The Mediterranean Garden No. 105, July 2021

Recently Ann Semaan Beisch visited The Park at Cross Creek, Malibu. She writes: “This was a first outing since Covid-related restrictions were eased. It was a thrill to be lunching in warm sunlight and knowing that nearby the waves on Surfrider Beach were rippling gently ashore. The air itself seemed to be infused with a delightful touch of “normal”, making the ordinary a little more magical. Tender, newly-planted California sycamores, Platanus racemosa, with light green leaves and flower heads that formed into spherical fruit clusters of dark red, hairy achenes, surrounded me. These native, coastal plane trees planted throughout the area so surprised me as I sat on a terrace in the middle of the village.” 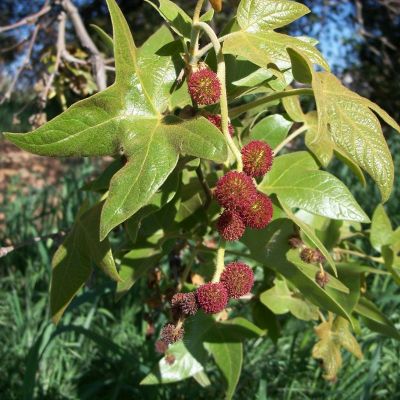 And to my delight, in between the sycamores, were the occasional Catalina ironwood, Lyonothamnus floribundus subsp. asplenifolius, a tree often found in the inland chaparral forest, and the small, tender bush-like Western redbuds, Cercis occidentalis, blooming pink and purple.

It is always a wonderful feeling when you stumble across something so unexpected that you are completely awestruck. What could have been nothing more than a well-tended commercial strip of stores was a landscape of open commons, incorporating many native coastal plants and trees and spaces for people to come together and to enjoy the gardens. 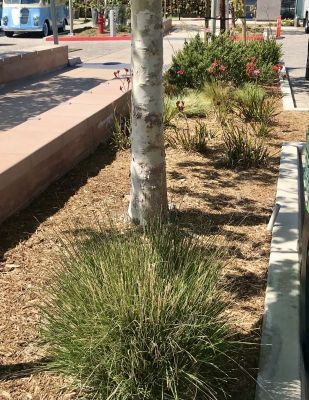 Grasses in the car park including Festuca californica and Festuca idahoensis

Bigberry manzanita, Arctostaphylos glauca, a California chaparral native, completed parts of these landscaped borders between a car park area and a hard-surface walkway. Bubbling water sculptures and benches were interspaced with sections of native planting and a specially designed playground for handicapped children. Hedges of toyon, Heteromeles arbutifolia, camouflaged buildings along the walkways and filled in shady spots on lower levels of the campus.

Bleached store fronts and the general architecture blended into the seaside environment of Malibu’s village. Many of the exterior walls of surrounding structures were covered with succulents and grasses, creating vertical gardens of greenery. 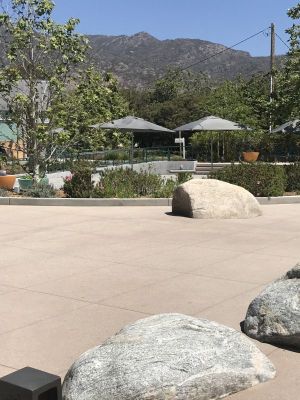 Overview of the The Park at Cross Creek site

Sprays of grey-green foliage with mustard yellow flowers, ‘Desert Eve’ Yellow Yarrow and common yarrow, Achillea millefolium, were planted with plenty of space to spread. Rubbing a few yarrow leaves together released a strong, clean scent, so ordinary and so satisfying.

Expanses of deer grass, Muhlenbergia rigens, along with native fescue were used along kerbsides and around native sycamores, softening both the surrounding hard surfaces and the brown gravel landscaped areas. These coastal native grasses are often planted in California gardens as they blend well into the environment with their range of colours from light silver-green to purple. They have dense basal foliage and pointed leaves that can reach a metre or more in height. These grasses, an acquired taste, have become popular and accepted natives and fill difficult spots under the harsh sun in a California garden. 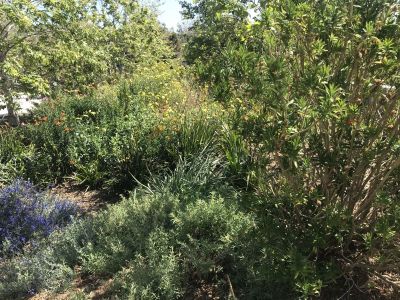 The delightful daisy-like Encelia californica, blooming profusely, created bouquets of yellow flowers tucked in and around the gardens. It was easily the most prevalent resident flora of this coastal neighbourhood. Known by different names, such as the California brittlebush or poppy bush, Encelia californica thrives across the local bluffs and bushy slopes along the coast.

The brittlebush and its related coastal sage scrub are the dominant low-growing, aromatic, drought-tolerant shrubs that have best adapted to the mediterranean climate of California’s coastal lowlands. These natives include white sage, Salvia apiana, California buckwheat, Eriogonum fasciculatum, poppy brittlebush, Encelia californica, golden yarrow, Eriophyllum confertiflorum and toyon, Heteromeles arbutifolia, commonly known as California holly or Christmas berry. This flora is often referred to as a “soft chaparral” due to the predominance of soft, drought-deciduous leaves in contrast to the hard, waxy-cuticled leaves of California’s evergreen inland chaparral (see TMG 96 for my article “Late Winter in a Chaparral Garden”). 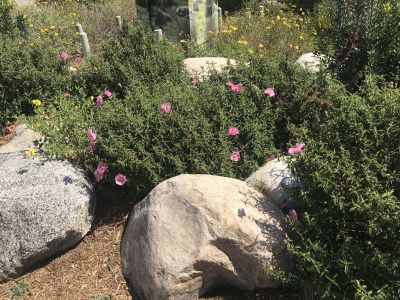 A traffic island covered in native and non-native rustic landscaping

Completing my exploration, I realised that in a surprising landscape design ploy the road itself was punctuated by a traffic island covered in native and non-native rustic landscaping. White sage, Salvia apiana, California wild rose, Rosa californica, and hummingbird sage, Salvia spathacea, California sycamores as well as many grasses were used in a very rustic landscape design. Various-sized boulders and local rock created formations that were interspaced in the setting and reflected the brown hillsides of the coastal mountains beyond. This traffic island of natives camouflaged the entrance to a parking lot, and a power installation. The grasses and the foliage as well as flowering native and non-native shrubs had an overall low-key coastal look of beiges, grey-greens and bleached whites. 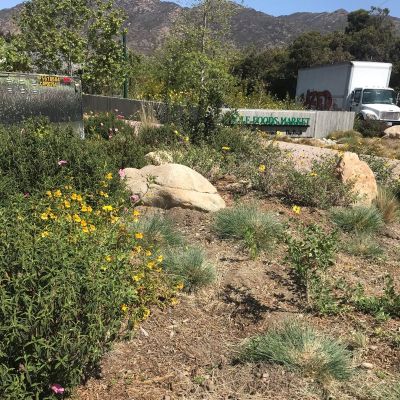 There is a hint of magic in rediscovering the simple, the ordinary and most of all the normal that defines many little things we took for granted before the pandemic. Walking through a new landscape of thriving local native flora creates one of those moments of ordinary magic, when small things are as they should be and your heart just hums.

Special thanks
A special thank you to Steve Soboroff who responded so graciously to inquiries regarding The Park Malibu and to the Soboroff Partners of The Park at Cross Creek, LLC who were the powerhouse behind this development. A special thanks too to William (Bill) Ropp, the landscape designer and mastermind of this California native coastal installation whose knowledge and experience with California native plants made a subsequent tour of the campus especially meaningful. And heartfelt thanks to a young, up-and-coming student of landscape design, Ana Laura Paiva.