A visit to South Africa

Photographs to illustrate the article published in The Mediterranean Garden No. 106, October 2021

The photo at the top of this page shows a mass of wild flowers near Paternoster, South Africa (Photo Geoff Crowhurst)

Readers may recall an article Geoff Crowhurst wrote in TMG 104 where he referred to growing South African bulbs from imported seed. Pre-Covid, this interest inspired him to take a trip to South Africa, in early spring concentrating on the Western Cape area with its true mediterranean climate.

Geoff writes: A day after arriving, I joined a small group on a wildflower tour from Cape Town that went as far north as Calvinia and then back via Paternoster on the coast.

From Calvinia we travelled to Nieuwoudtville, which has been called the bulb capital of the world as it is possible to count more bulbous plants per square metre here than anywhere else on earth. The township itself is small and rambling, so we were taken to a farm property where the owner is known for his interest in wildflowers and efforts to preserve them. Stock are kept off sensitive areas while the wildflowers are in growth and until they die down. I was able to recognise some ixias and babianas and later to identify the very pretty Nemesia cheiranthus. 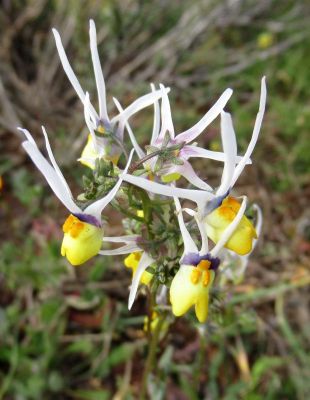 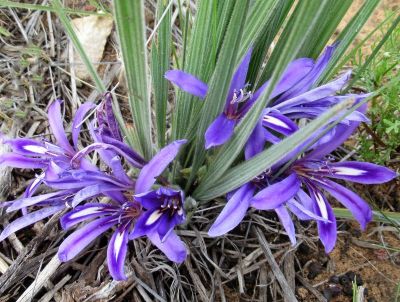 A highlight of the trip was visiting the wildflower show at Clanwilliam, a splendid affair set up in a church building. There were both massed wildflower displays and individual named exhibits. 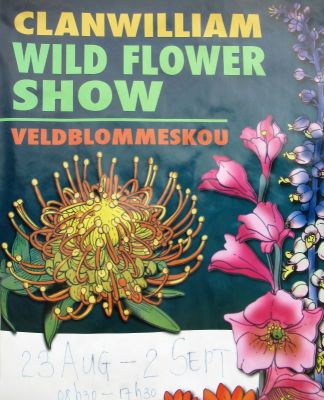 Catching the eye were swathes of the Lachenalia mutabilis that I grow, and both Bulbinella latifolia (orange) and B. cauda-felis (white) with their gently tapering brushes of flower. Most intriguing was the use of a trompe l’oeil depicting a distant mountain range, merging perfectly with a foreground of (real) wildflowers. 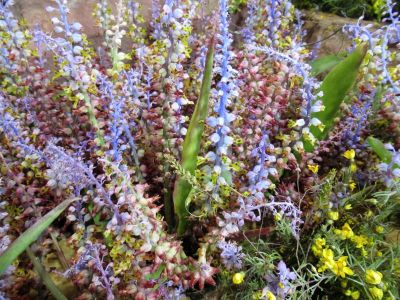 Not far from Clanwilliam we walked along the Sevilla Art Trail, part of the Cederberg Range, where we were able to observe rock paintings done by the native San people over 2,000 years ago. Descendants of the San are now confined to parts of Namibia and Botswana. Keeping an eye out for plants, I saw some wild gladioli, but the over 250 species can be difficult to identify, so my photos are put together as just gladioli. 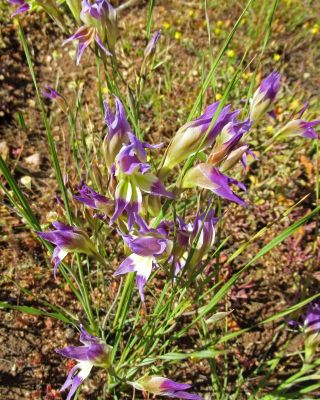 Also in this area we first saw weaver birds and their many nests in a single prickly tree. Entry to each rounded nest is from the bottom, which has an entry area and adjoining area for the eggs. Strange. 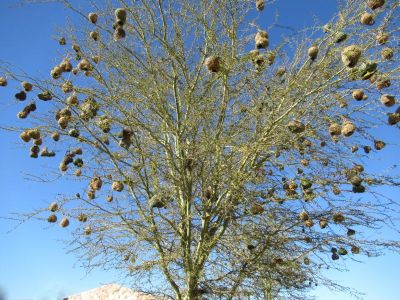 Before reaching Paternoster we went through open, mainly flat country with a low covering of bush and masses of daisy-like flowers: arctotis, cotula (Button Flower), dimorphotheca, gazania and osteospermum. These were good to get landscape photos of, and generally ooh and ah over. They probably appealed more to those in the group who were not as interested as I was in searching for individual bulbous plants. (See photo at the top of this page)

Back in Cape Town I did my own thing: go to the top of Table Mountain by cable car, visit the excellent Apartheid Museum, wander in the Company’s Garden, and find my way to the well-known Kirstenbosch Botanic Gardens. One can wander along the top of Table Mountain; although it is mostly covered by tough, low growing bush, there was little in flower - probably too early in the season. I have recently obtained Graham Duncan’s Grow Bulbs, 2010, which has a photo of the Lion’s Head, a rocky outcrop adjoining Table Mountain (to the left as viewed from Cape Town). The photo shows huge numbers of Amaryllis belladonna in flower after a fire.

The Company’s Garden dates from 1652, when it was established to supply Dutch East India Company ships with fresh produce when they called in on their way east. It was later fashioned into a garden with ornamental plants although a small part is still planted with vegetables as a reminder of its past. The Garden includes some historic trees, a nice statue, a lengthy trellis, and a café. There were big banks of the native clivia in flower. 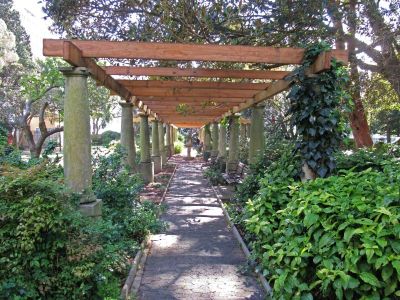 The Kirstenbosch Botanic Gardens have been established on the slopes below Table Mountain, so the plantings have a splendid backdrop. Apart from big beds with plants of the Proteaceae, two other things particularly took my attention. The Boomslang (tree snake) walk is a marvellously constructed winding aerial walkway giving views over the garden. Further down, an area planted with palms and cycads includes a well-placed metal dinosaur who looks perfectly at home in his surroundings. 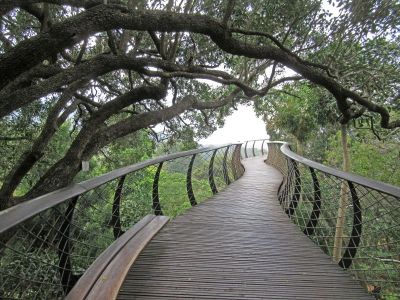 From Cape Town an excursion took me on about a three-hour bus ride east to Swellendam, the third oldest Dutch settlement. The coastal strip the road follows is backed by a sturdy mountain range, at that time topped in places with snow. Swellendam is a quiet, small town with an adjoining nature reserve, where there were natural gravel paths and plenty of soft white and pink ericas in flower. But my chief reason for visiting was to get to the De Hoop Nature Reserve, which I did one day by hiring a taxi, which I knew in advance would be possible and quite cheap. 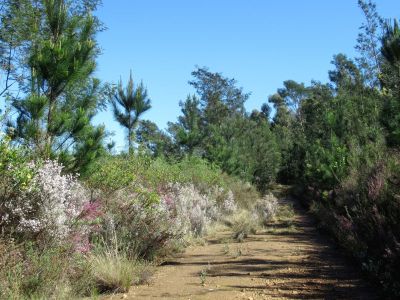 A bonus on arriving at the Reserve a was seeing bonteboks (a kind of antelope) and mountain zebras. I wandered for some hours through low shrubby growth on sandy soil close to the coast, and at one point came to a lagoon with water birds. By keeping a good look-out I found a number of wildflowers, and what was surely the white Lachenalia dehoopensis. Unfortunately I haven’t been able to get seed of this, although I haven’t exhausted all avenues yet. The following day I returned to Cape Town. 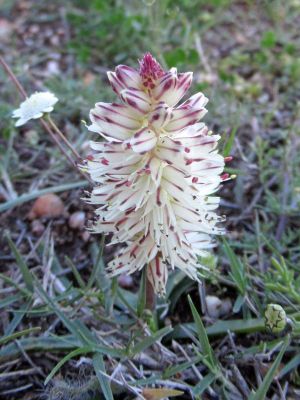 On my very last day in South Africa I made my way to the Darling Wildflower Show. Darling is about 70km from Cape Town. I was pleased to see many labelled exhibits at the show. But the show pavilions were surrounded by grounds with a variety of handicraft and food stalls, and with places to sit, eat and relax in the shade of trees. I chatted with a few other visitors and enjoyed a very leisurely day. This outing was a good way to end my stay in South Africa as next day I left Cape Town for the flight home. I had looked forward to an interesting, even exciting, trip and wasn’t disappointed.