An AGM to remember

Photographs to illustrate the article published in The Mediterranean Garden No. 111, January 2023

Caroline Davies is Past President of the MGS, retiring at the 2022 AGM. She writes:

This is a very personal account of the 2022 AGM as it took place in Athens: the place where my long membership of the MGS began when I first visited Sparoza and met Sally Razelou. A friendship was sealed, intensified by a mutual love for the Greek flora. I thought of this each morning as I sat outdoors in the roof garden of my Plaka hotel, gazing at the Acropolis set against the vivid blue sky which Athens can so often display in November. The last time I wrote about an AGM was in January 2017, soon after I was elected President for my first term; now I am writing again as I return to being an ordinary member and plant lover. Since 2016 I have learnt so much more about the Society and my enthusiasm has not diminished.

We started our programme with a Welcome Reception at the Ionic Centre, beautifully catered for by Tony Gabriel. We enjoyed excellent Greek wines from the vineyard of Anne Kokotos, an MGS member. The atmosphere was good with many friends meeting up again and new friendships being established. 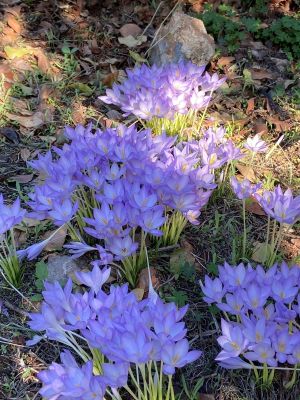 On the Friday morning a great sense of anticipation was felt on the coach as we set out for Peania and our first destination, Sparoza. For many, like me, it was a bittersweet moment as it was my first visit since the death of Sally Razelou. It was also my first opportunity to meet Lucie Willan, although we had spoken much via Zoom. As we walked towards the house through the gardens, we encountered delightful drifts of Crocus goulimyi, expressing the spontaneity of the garden and still fulfilling the deep wish of Jacky Tyrwhitt that Sparoza should forever display the natural flora of Attica and Greece. 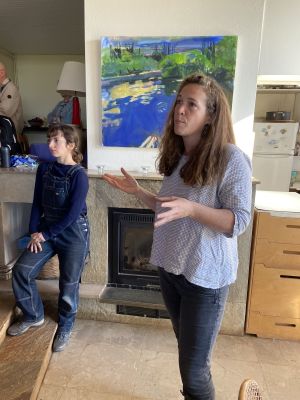 Lucie and Matina welcome us to Sparoza

At the house we all met Lucie who introduced us to Matina Galati, an artist and landscape architect who is now gaining horticultural knowledge during her three months at Sparoza as Lucie’s Gardening Assistant. Lucie’s talk was filled with creativity, enthusiasm and a deep understanding of the garden. She described the excitement about the availability of Greek plants at Sparoza’s regular Plant Open Days, citing the nursery offering such treasures as Euphorbia acanthothamnos and Ptilostemon chamaepeuce.Both these plants are familiar fixtures in the Greek landscape but, until recently, not available for garden culture although they have long featured in the Sparoza garden. 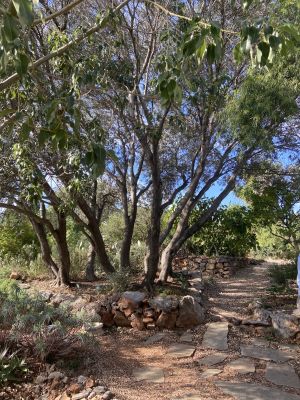 Dancing olives at Sparoza which suffered in winter snow

Lucie described the erratic weather conditions during 2022, the heavy snow in winter which was savage to many trees and then the drought which weakened a lot of plants. She described her wish to fill the gaps with Judas trees (Cercis siliquastrum)and strawberry trees (Arbutus unedo),carrying on Sally’s legacy as she expounded further on her vision for the garden. Everyone was inspired by Lucie’s welcome and introduction, and it was hard to tear ourselves away from the garden. 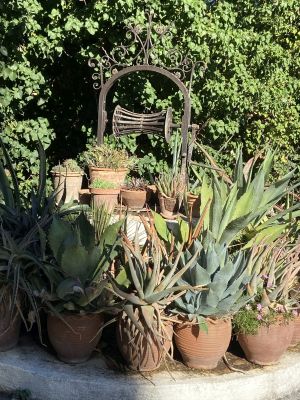 Massed succulents around a well at Vorres Museum

Our next destination was the Vorres Museum, close by in Peania, where we were greeted warmly by Nektarios Vorres, current President of the Museum and one of three grandsons of its founder, Ion Vorres, who died in 2015. Nektarios gave us background on the museum, his grandfather and the gardens with their focus on mediterranean plants, before we explored further. 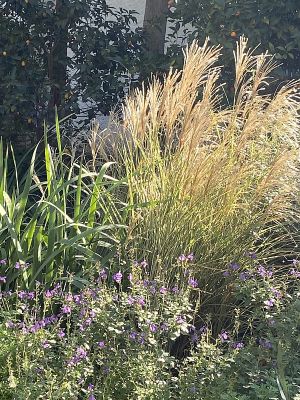 A grasses and perennials border at Vorres

The fine network of courtyard gardens flows around the ancient part of the Museum and at any time of year are filled with interest, displaying architectural plants and antiquities with ideas for many of us gardening in smaller spaces. The fine Greek dry-stone walls, displaying the xerolithia method, offset many of the plantings, and a number of us paused to take in the use of a range of artefacts, including old millstones, well-heads, olive oil jars and ancient doors, all of which were collected by Ion in the days when no one wanted them. We were also struck by the more recent plantings with a skilful use of grasses and tough plants such as an abundance of salvias, many of which came from Eleftherios Dariotis, a long-time friend of Nektarios and a prominent MGS member. Many of you may know his plant catalogues.

In the evening it was back to the Ionic Centre and I was so happy to meet up again with Jennifer Gay who was giving our special lecture. I met Jennie when she was Sally’s first gardening assistant at Sparoza and later on met up with her again when she was creating a botanical garden on the Ionian island of Cephalonia. Jennie’s lecture on her Mediterranean Garden Odyssey was natural, inspiring and informative. 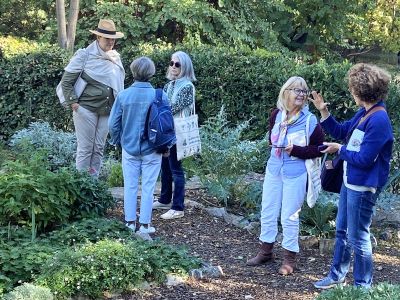 The following morning, Saturday, we set off for Mount Hymettus - to be honest, no visit to Athens is complete for me without a visit to Kaisariani. We were met at the monastery by Sophia Stathatou and Nikos Pangas, whom I’ve known and admired for very many years. The monastery is dedicated to the Presentation of the Virgin Mary, with its fascinating history from the eleventh century but with its foundations based on an ancient temple dedicated to Aphrodite. Sophia looks after the gardens within the monastery’s courtyard. She and Nikos then led us to the Educational Garden, a delightful area designed by Sophia on a series of terraces below the botanical garden. She has selected plants that flower all year round to attract children’s eyes, because the aim is to involve school groups in Mediterranean gardening. These included a range of salvias, artemisias and the chaste tree (Vitex agnus-castus), all looking vibrant in the sunshine. 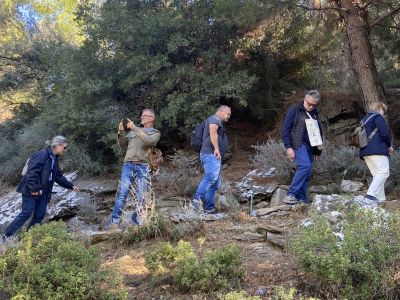 The botanical garden itself was started in 1964 by the Philodassiki Society, or Friends of the Trees, which was also responsible for the replanting of trees on the mountain following the devastation during World War II. Members visiting for the first time could not believe that Hymettus was in such a denuded state at that time as they viewed the greenery and collection of trees which greet visitors today. I have a long association with the botanical garden and first visited it just after Irene Ramfou had laid out the network of pathways up the hillside. She was one of many inspiring women who have been involved with Kaisariani and I met her through Sally. 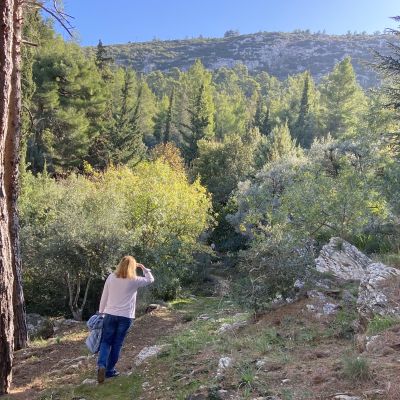 Sophia and all the trees at Kaisariani

Sophia has been at Kaisariani for fifteen years and when she came she had to start again, clearing the gardens to reveal the treasures beneath, mainly plants from southern Greece. They water and weed and have had to contend with the snowstorms I have already mentioned in relation to Sparoza, which broke many plant signs and necessitated the cutting down of a large number of trees. They also had to redo the paths. More trees will be planted and the increase in open spaces may be an advantage for the many plants which grow here as a result of the additional light coming in. 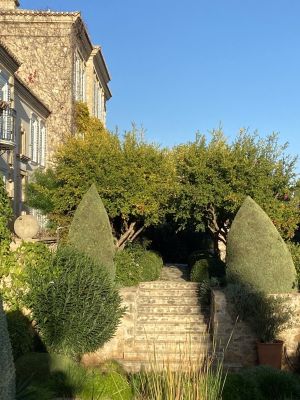 Steps and clipped shrubs at Eleni’s

We then travelled to Mount Pendeli which, unlike Mount Hymettus, was badly affected by severe fires during the summer. We were shocked to see the parched landscape as we approached the garden of Eleni Martinou. This was our last destination and one I was greatly looking forward to, having first visited it with Sally many years ago. The garden was started in 1996 and both house and garden were completed in 2000, although the garden continues to evolve. Eleni told us about the three fires which had occurred before this recent one. Charles Shoup, who had a very fine garden in the Peloponnese, designed the house and garden. His impressive hard landscaping is softened by the plantings which Eleni has sensitively carried out.

It is hard to convey the magnitude of this garden, despite the recent fires but it is diverse and with a seemingly endless series of walled gardens that reflect an assortment of Mediterranean scenes. Then there is the Cyclops Room, a dome cut into the hillside where the sounds of tricking water are everywhere, and finally the Secret Garden where inscribed on a stone slab lines from Voices by the poet C.P. Cavafy recall the beloved voices of those who have died before us. I love this spot as Cavafy is hard to surpass and the atmosphere is peaceful and moving. 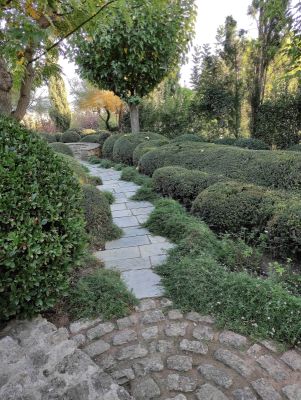 On Sunday the General Assembly took place and the much-needed amendments to the MGS Charter were approved by more than fifty percent of MGS members to make them valid. We now wait for approval from the Greek Court but we are close to making the future much easier for administrators of the MGS. We also elected a new Administrative Committee and I send my very best wishes to its members for the years ahead. It has been a pleasure serving the MGS for six years but it is now time for others to take over and I have great optimism for the future.