Photographs to illustrate the article published in The Mediterranean Garden No. 93, July 2018

The photograph at the top of this page shows a garden in Nissáki with gravel ‘river’, design by Thomas Doxiádis.  (Photo © Marianne Majerus)

Rachel Weaving has been researching the gardens of Corfu for the new book Gardens of Corfu, produced in collaboration with Marianne Majerus, published in March 2018

She writes: Garden makers find Corfu special not just because of its varied growing environments and the inspiration given by the natural landscapes and glorious views, but also because of its relatively damp climate, which allows the cultivation of a wide range of plants. Despite its dry summers, Corfu gets much more rain each year than most Mediterranean islands - 1087 mm.

Corfu’s eighteenth- and nineteenth-century gardens give us insights into local cultural and economic history. They show what people valued and enjoyed, what they used for garden making and maintenance, and what plants they could get hold of. Corfu has always been cosmopolitan, open to the international flow of ideas and tied into world trade routes. And for centuries it was a highly stratified society (feudalism in all but name is said to have persisted in some parts of the island until World War II). For the landed gentry, producing olive oil, citrus fruit, and wine on large estates with very low labour costs was highly profitable, providing the means to create pleasure gardens at their country homes even though they lived for much of the year in the capital, Corfu Town. 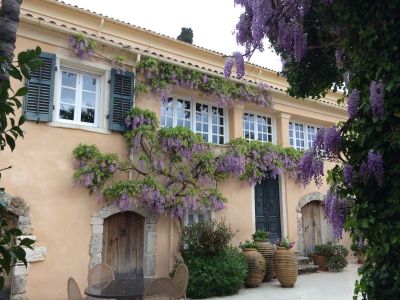 The gracious house at Krevatsoula began life as a Venetian artillery post, then became the centre of a thriving agricultural estate

Looking at the grander old gardens, we can see from the layout of those that survive today, and from paintings of the time, that they followed western European models, in keeping with the cosmopolitan, western-influenced lifestyle of their owners.

From the period of British rule and the early years of the Greek republic we also see the influence of Victorian England, in parterres that were meant to be filled with brightly flowering bedding plants, and in the specimens of exotic trees that had recently been introduced to Europe by botanical explorers. Phytolacca dioeca, sometimes called bella sombra, came to Europe from Argentina in the late eighteenth century. With its strangely shaped multiple trunks and red-stemmed green leaves, it was highly sought after when it first arrived. 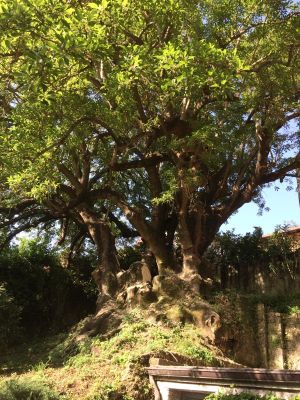 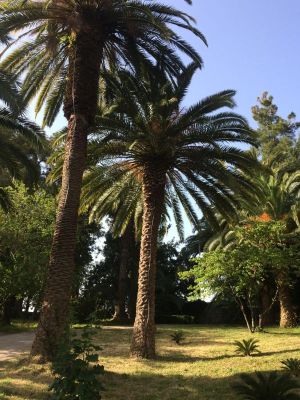 Forged in an age of globalisation, the contemporary gardens are financed mostly from outside the island rather than from local agriculture, but like their predecessors they show clear international influences. Though they vary widely in complexity and mood, almost all are shaped in some way by the desire, now seen in regions with mediterranean climates across the world, to be ecologically sustainable and locally rooted….. Paradoxically, then, the international influence in Corfu today brings the new gardens full circle – making them seek to be as locally authentic, as Corfiot, as possible.

Calí Doxiadis, a former MGS President, whose own Corfu garden has influenced many others on the island, explains: “Often, the landscape is so beautiful in itself that all you have to do is refrain from betraying it. In practical terms, and especially for the immediate surroundings, all you need to do is provide transitions from the artificial to the natural. In other words, incorporate your garden into the landscape.”

In their extensive use of Mediterranean native trees and shrubs, the new gardens depart from local tradition. Designers appreciate these plants for their drought resistance as well as their decorative value, using not just cypresses and pines but also broadleaved native evergreen trees and shrubs to provide the backbone of a garden’s planting. 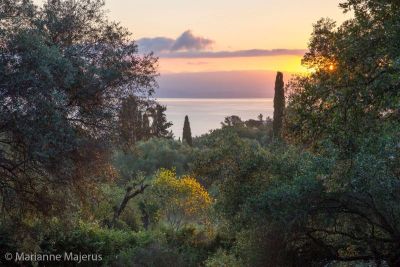 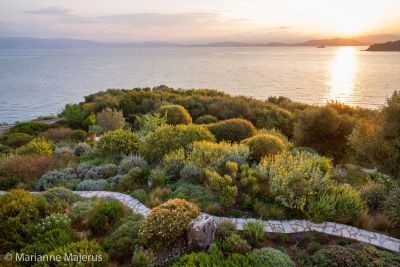 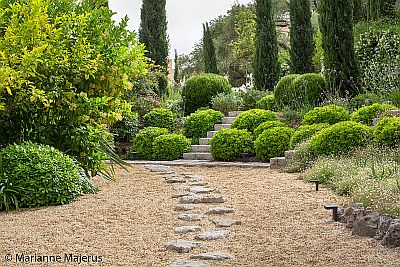 Despite the notable differences between local gardens old and new, certain long-standing elements of style give a characteristic local feel and have been whole-heartedly adopted by contemporary designers: stone both worked and in the raw, wrought ironwork, terracotta urns, certain cultivated plants that are recurring favourites, and a tendency to incorporate fruit or other food crops into gardens that are mainly decorative. Some of these elements are familiar elsewhere in the Mediterranean Basin – for example the use of local stone for building, terracing and ornament, and the combination of fruit with flowers that typifies village gardens almost everywhere. Corfu shares with the rest of Greece the tradition of the avlí – a courtyard garden that combines fruit and flowers; even small urban gardens and balconies usually feature at least a lemon tree and a pot of tiny-leaved Greek basil. Contemporary villa gardens tend to be mainly ornamental, but – more for fun than from need – several of their owners grow vegetables, harvest their olives and fruit, and make wine from their patio grapes. 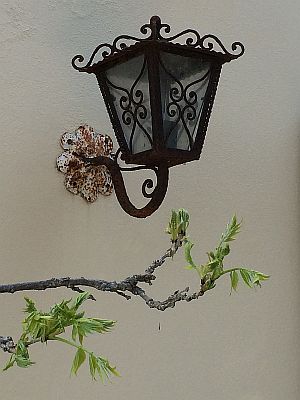 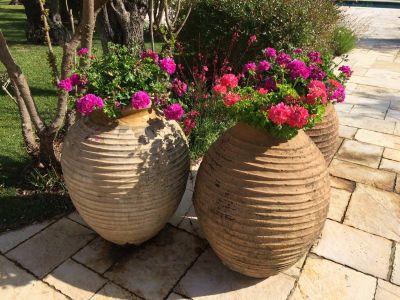 Old terracotta urns, once used for storing and exporting olive oil, are a characteristic element of Corfu style in gardens old and new 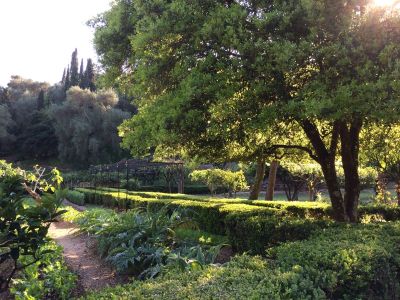 Combining the ornamental with the practical: the immaculately tended kitchen garden at the heart of the Rothschild estate