AGM 2018  Alicante and the Costa Blanca

Photographs to illustrate the article published in The Mediterranean Garden No. 95, January 2019. Further photographs can be viewed on the Costa Blanca branch page.

The photo at the top of this page shows traditional irrigation channels at the Museo del Palmeral, Elche (Alisdair Aird)

Friday 26 October
Day one of the main AGM programme: we started at the house and garden of the Costa Blanca Branch Heads, Alan and Carol Hawes. Their garden has been planned and laid out as a series of rooms, with some devoted exclusively to plants from the Americas, Australia and Africa. 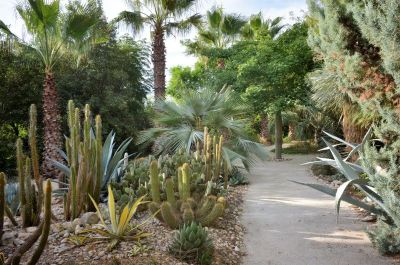 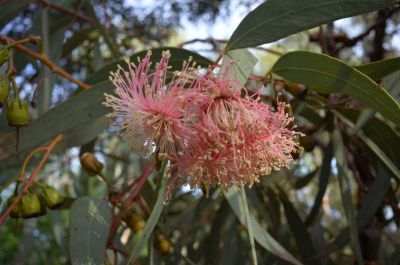 We then went to Elche, famous for its palm groves, where we found the Vertical Garden. 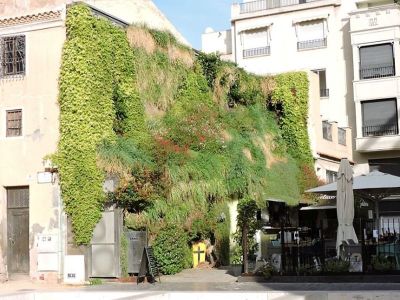 The final visit of the day, Carmen del Campillo is modelled on a Moorish Tea Garden. The building is a veritable maze of courtyards and interlocking rooms, with a myriad of secluded nooks and niches. 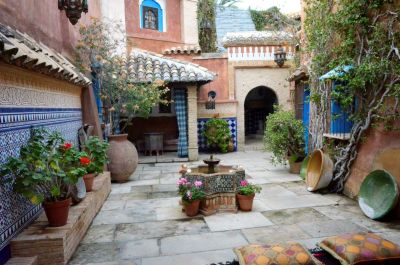 Saturday 27 October
It was pouring with rain on day two of the main AGM programme, damp and cold when we arrived at our first visit of the day to the privately owned, beautiful and historic Brutinel Garden, near Alcoy. It was built between 1835 and 1855 for Vicente Brutinel, a successful businessman, alongside his paper factory. Laid out on several levels, the garden gradually climbs the steep hillside. The huge conservatory had once housed a collection of plants including palm trees: it has been restored to the original design but the plants are now small and few. 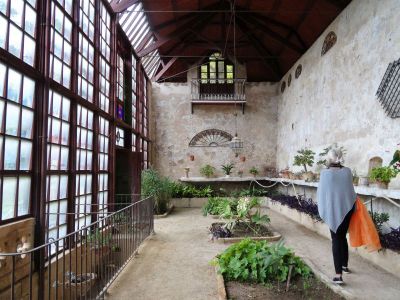 Our next visit was to the Jardin de Santos near Penáguila. This is another historic garden, created in the 1840s by Joaquin Rico y Soler. Above the pool I particularly liked the long cypress-shaded pergola walkway with its central seating area with both yellow and white banksia roses growing over an ironwork cupola. This led to a traditional greenhouse with a small collection of orchids and other tropical or tender plants. 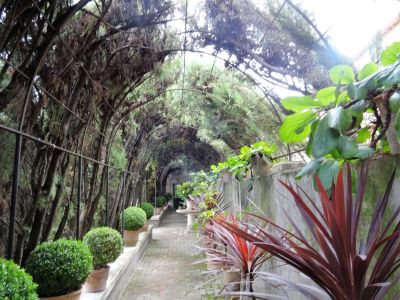 Casa Tápena Nature Park and Demonstration Garden was our last visit of the day. I liked the Mediterranean Garden very much: it was well laid out with shallow terraces planted with specimen trees. The underplanting with whole sections having sweeps of repeated species such as lavender, prostrate juniper and rosemary, lentisk, roses, Coronilla valentina subsp. glauca or Quercus coccifera. 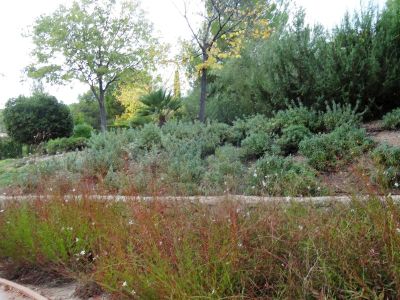 Sunday 28 October
It was a much brighter sunny morning on day three as we set off for the General Assembly which was held in the Parador Hotel, Jávea, set in beautiful grounds. The large bushes of Brugmansia versicolor, heavily laden with their pale apricot angel’s trumpets, were stunning. 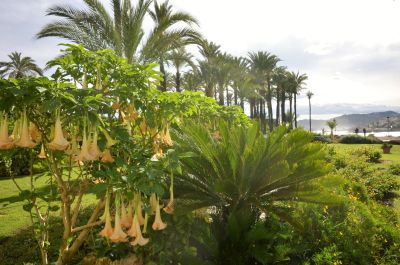 The Albarda Garden in Pedreguer, which we visited in the afternoon, is considered a benchmark in the world of mediterranean gardening. It covers an area of 50 hectares in which there are 700 species of indigenous plants and a large collection of roses.

Our guided tour of the garden started at the house in the formal garden with its clipped hedges and trees and long ornamental pool. 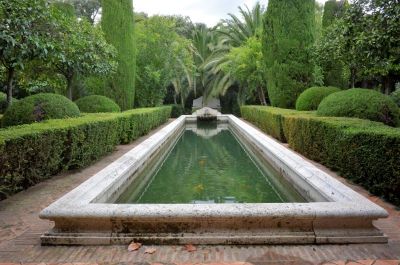 The mixed planting, including the integration of several palm species with other trees, was striking such as the walk leading to a Renaissance fountain lined with impressive Bismarckia nobilis palms. 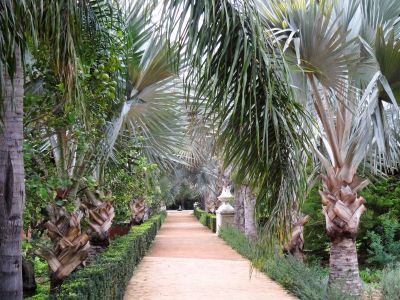 It is impossible within the scope of an article such as this to do justice to our garden visits. I hope though that this has given a flavour of the excellent choices for our visits made by Carol and Alan Hawes and I must acknowledge the helpful and detailed background information that they provided for us which enabled us to get the most out of our visits.