The Island of Bendor

Photographs to illustrate the article published in The Mediterranean Garden No. 97, July 2019.

The photo at the top of this page shows a pine (Pinus halepensis) bent double, horizontal to the ground, shaped by years of strong wind on the island of Bendor (Photo Kate Marcelin-Rice)

Kate visits the Island of Bendor in the south of France which in 1950 was acquired by Paul Ricard, famous for his pastis named “Ricard”.

She writes:
For centuries Bendor had been a deserted rocky mass pounded by the waves. In his autobiography La passion de créer Ricard says that this “rock” belonged to an old lady who had never set foot on it and that its sole inhabitant was a single sheep. He also says that he found it covered in mauvaises herbes (weeds - presumably he meant wild plants which he didn’t like) with the exception of some helichrysums and a few narcissi.

Ricard designed the entire island himself, a task, he says, which truly demanded imagination. His creation was made with the help of a mason called Robert who was the island’s first inhabitant and directed the work. Indeed Ricard had a statue of this man from the Ardèche erected during his lifetime. 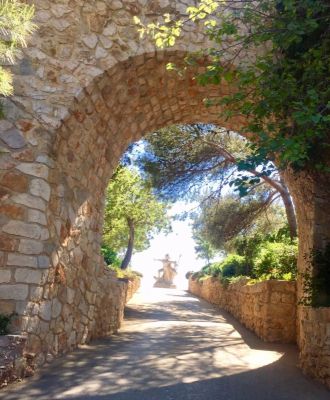 Masonry and path leading to a statue

Rocks and stones were used to link the two parts of the island and to create paths and walks by the sea. A tang of seaweed lingers in the air. The frequently brisk waves on the windward side contrast with the calm of the leeward with its small, perfect swimming beaches and sparkling white sand. The walls that surround the path round the island close to the sea are built with uneven, irregular shaped boulders, rocks and stones and in places decorative wooden trellises serve as fencing. 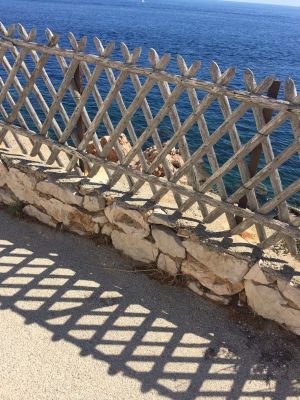 When I visited the island recently I came across some pines that seem to be dancing and a natural bonsai of a Pittosporum tobira. 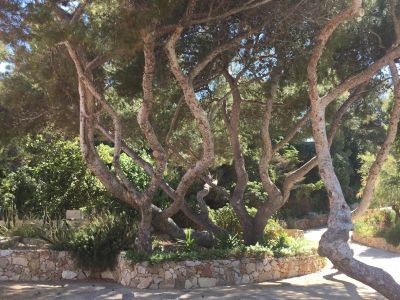 As well as being an industrialist, Ricard had a passion for nature. While walls were emerging from rocks, plants and vegetation were springing up on Bendor. Ricard wanted his “principality”, as he called it, to be “submerged in vegetation”. He mentions flower beds, palms and bougainvilleas. Today there are no bougainvilleas in sight. This is hardly surprising for the island cannot escape the cold blasts of the Mistral in winter, yet his palm trees still stand.  And the flower beds today are for the most part planted with lavenders, Convolvulus cneorum, Felicia amelloides, orange Cotyledon orbiculata, Hertia cheirifolia (Othonopsis), gazanias and other plants. 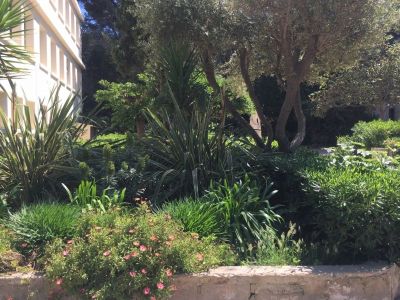 Moreover, in the wilder areas succulents of the mesembryanthemum type (whose names I never know) grow in profusion, now entirely covering the ground or cascading down rocks: yellow, orange, red, pink. There are too various different-coloured osteospermums. Yuccas and Agave americana provide spikiness. 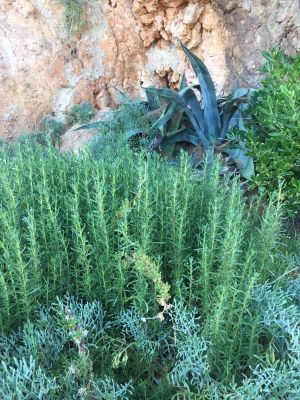 Then there are tough Mediterranean plants, grey-leaved species (Atriplex halimus, lavender, Senecio maritimus, what I think is golden samphire, Limbarda crithmoides, and of course helichrysums) competing with others that are green (for example rosemary, great clumps of Echium candicans). 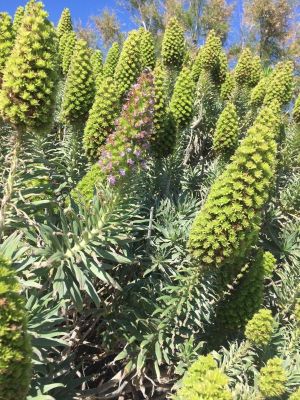 They blend with the aged trees, some with gnarled and twisted trunks, one pine (Pinus halepensis) bent double, horizontal to the ground, shaped by years of strong wind, oleanders (in bud when I visited), tamarisks, old umbrella pines (Pinus pinea) and cypresses. 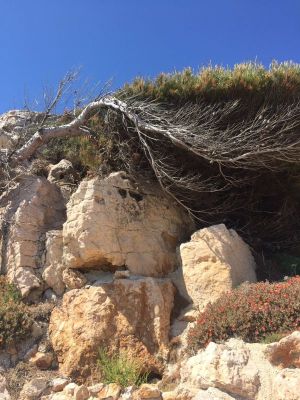 Ricard envisaged a row of small provençal-style, brightly coloured villas to border the tiny port, but with no kitchens as he felt strongly that “women should not be bound to the stove”.  Hence he planned restaurants, cafés, snack bars, one or two hotels and other villas. 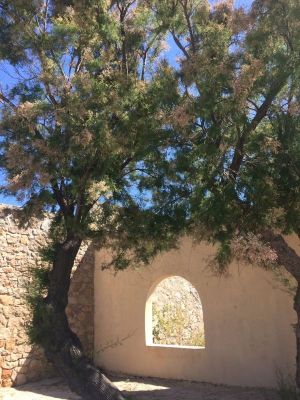 Ricard’s passionate words in his La Passion de créer: “This island enthralled me, building a world in miniature I was allowed everything, I had to bear in mind only its surface area, the sky and the sea as the sole limits to my dreams”. The tiny island of Bendor, a delightful place for a contemplative stroll, is a testimony to Paul Ricard’s gusto for life.