Photographs to illustrate the article published in The Mediterranean Garden No. 97, July 2019.

The garden at Sparoza has received exceptionally high rainfall this year: Custodian Sally Razelou has never seen anything like it in her 27 years at Sparoza and calls the greening of the garden an ‘Annus Mirabilis’. She writes:
The autumnal renaissance is the most dramatic happening in our mediterranean climate. The warm earth responds to the long awaited rain eagerly, scenting the air with its unique aroma – petrichor. The candles of squills, Drimia maritima, appear first. Then swathes of cyclamen flowers, Cyclamen graecum, raise their slender throats from the earth. This autumn it was as if an interior decorator had laid pink wall-to-wall (tree-to-tree?) carpeting over the garden. 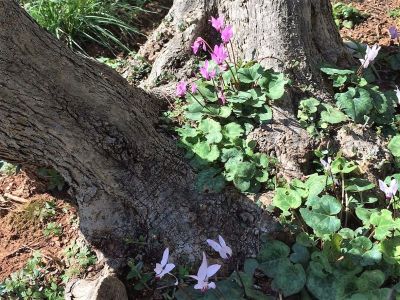 Tiny scillas, Prospero autumnale, the yellow flowers and green leaves of dandelions, Taraxacum sp., and the green shoots of grasses emerge and create a low green fuzz over the ground. Crocus-like yellow sternbergias and numerous species of crocus and colchicums follow. This native geophytic flora is accompanied in the garden by the South African Amaryllis belladonna and North American genus Zephyranthes, the lovely wind lilies of which we have three species, propagated and multiplied tenfold every year in our nursery. 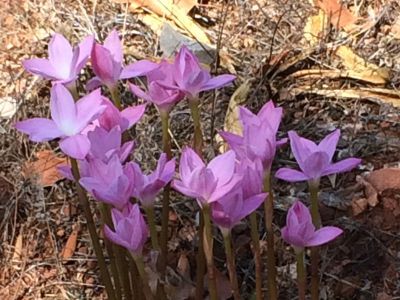 Circumstances prevented Sally from finishing the writing of this article and she asked Isabel, to complete it with the aid of her memories and impressions of Sparoza over the last year; their voices are spliced together in celebration of this unique place. Isobel writes:
Close to the turn of the year the annuals and spring geophytes start to sprout. This was larger than life this year. Everything, every patient seed lying in the land, grew and continued to flower with the sustaining rains until the end of May. A symphony of irises also begins around January which grows in force and complexity as different species overlap and grow progressively in stature. The earliest are the elegant tussocks of Iris unguicularis which have grown to gargantuan proportions here and produce domes of scented purple through their arched foliage. This year they bloomed and bloomed and bloomed again deep into April. 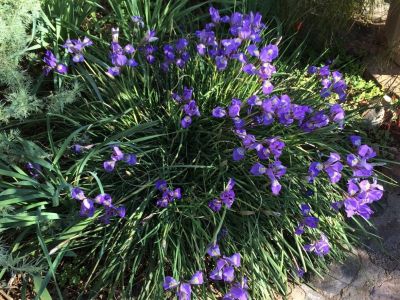 They were joined briefly by a burst of the irresistibly chic and sultry Iris tuberosa, known commonly as the widow, or snake's-head iris. 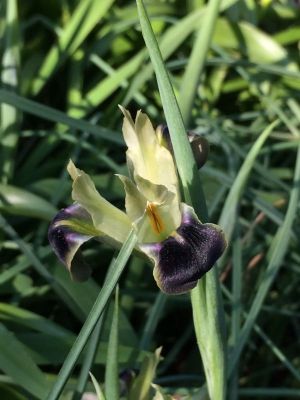 A little later the dark purple bearded iris, Iris × germanica, performed a mass-flowering all over the garden and hillside where they have been planted as ‘pioneer species’ to help prevent erosion. Even desiccated clumps that had lain dormant for at least six years awoke and flowered with complete abandon. 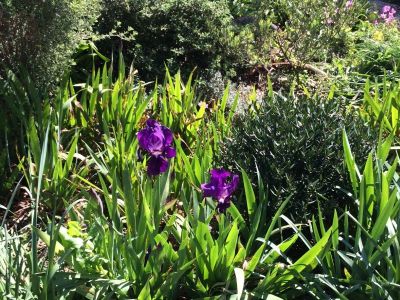 Last but not least the iris orchestra reached a crescendo, for the first time in years, in the flowering of our two clumps of the tall, slender, pale blue Iris florentina. The various species of aloe also came into more exuberant a bloom than usual, gracing the phrygana and other unirrigated areas of the garden with a theatre lasting from deep winter all the way through to summer. 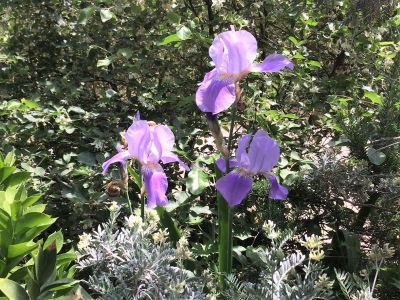 The olive trees seem in disguise, so covered are they in their tiny white and yellow blossoms. The kermes oaks, Quercus coccifera, and lentisks, Pistacia lentiscus, were glorious in their fresh soft bright new growth, as if a bloom of light moss had grown upon them. Even the long-suffering carobs, Ceratonia siliqua, put out new leaves, which they have not always done on our dry hillside. We spent much of May and June last year collecting pine needles but an unusual rain in July caused the pines suddenly to assume an unprecedented frothy guise of apple-green new leaves. The nerantzies (bitter oranges), having produced a much more plentiful crop of larger than usual oranges, are holding on to those shining orbs even as this is being written, a behaviour never seen before in this garden. 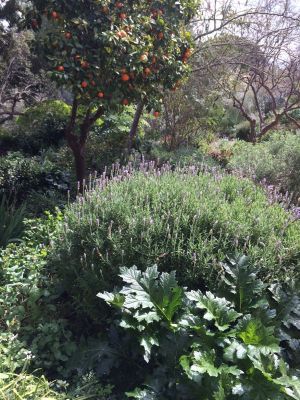 In the phrygana, spurred on by the good rains, the dense green domes of Cneorum tricoccon are now knitting together with the looser forms of various cistuses (including Cistus atriplicifolius), Globularia alypum, various teucriums and the Cretan endemics Phlomis lanata and Ebenus cretica. 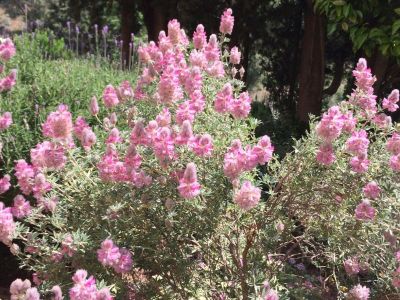 One of the greatest success stories in this area is the introduction and subsequent self-seeding of the autumn-flowering mandrake, Mandragora officinalis (syn. M. autumnalis) which appeared this autumn as early as the end of August. This species seems to be a much darker blue than M. officinarum which bears its flowers on its platter-like rosette in January. 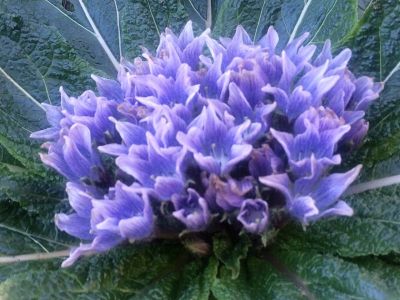 It is now nearly mid-June and summer has truly arrived. One annual flower, the effervescent, wand-like Bupleurum flavum, comes into its own at this time of the summer and in years with plentiful rain such as this one it covers the hillside in the most heart-rending golden mist. There has been no rain now for six weeks. The green has turned to straw. The ‘threshing floor’, a blanket of chamomile only a short few weeks ago, is shorn and a felty buff. There is such a quiet and contented beauty about the mediterranean landscape in the summer; pollination successful, plants shrink away from the burning earth, once again laid bare but safely holding the seeds of the next rebirth. 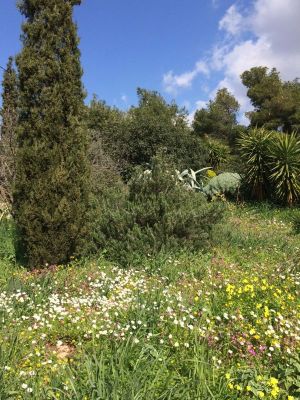