A mediterranean garden in Corfu

Photographs to illustrate the article published in The Mediterranean Garden No. 98, October 2019.

Forty-three years ago, Cali Doxiadis bought a ruined 200-year-old farmhouse on a hillside overlooking the sea on the Greek island of Corfu. It had an overgrown walled garden and six hectares of abandoned olive groves, impenetrable wooded areas and several small fields that were flooded during the rainy winter season.

She writes: “I knew nothing about gardening. I fell in love with this charming but totally inappropriate property. It was early April: I walked through a rusty garden gate into a wilderness of purple irises and dripping wisteria framing a crumbling two-storey ruin in many shades of ochre. That was it… I was hooked.

I still love the natural, dishevelled look and my garden is still undisciplined. Every April and May it is still overrun by the flowering climbers as well as by a proliferation of wilful self-seeders and rapidly naturalising bulbs, including descendants of the original irises. The only difference is that I’ve become a gardener. Along the way I’ve learned a great deal about gardening in our mediterranean climate. 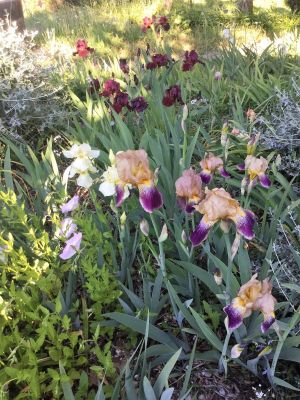 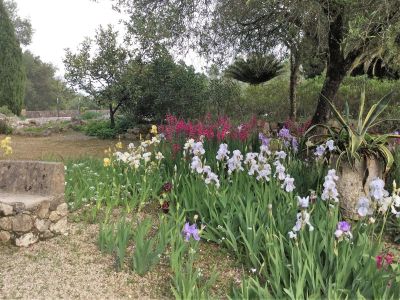 Iris beds in May

The annual bed
This gets luxury treatment in every way. It is raised about a foot above the ground, surrounded by a natural border of our local field stones. It is planted with a different selection of annuals each year, timed to reach their peak in July and August; once in place they’re protected with a thick layer of mulch. 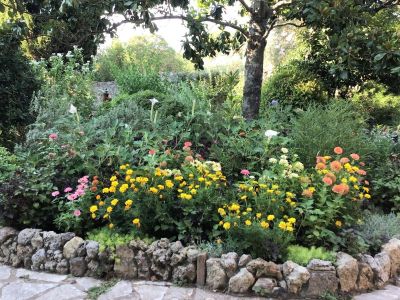 The walled garden
The annual bed and the pots are the only parts of the garden that get watered every day in the hot months. The rest of the walled garden is divided into two zones – one that gets watered twice a week and one, the largest, taking up about half the surface within the walls, once a week.

Against the walls, besides the wisteria, grow Banksia roses, Trachelospermum jasminoides and plumbago. One south-facing wall has espaliered apple trees grown on a dwarf rootstock. 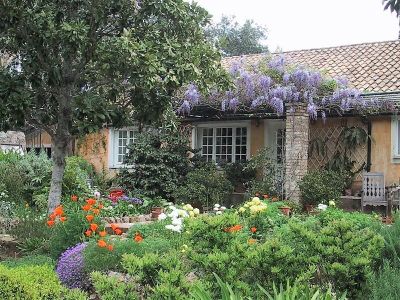 Adding to the free-for-all of spring are the surrounding olive trees beyond the wall with their flowering climbers. The wisteria is being discouraged from this invasion and is regularly cut back, but the roses have been planted on purpose. 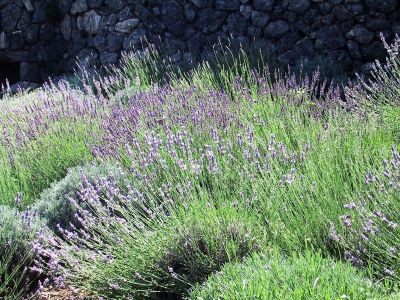 The gravel bed
This one of my failures, which turned into a success overnight, completely by accident.

A narrow terraced bed which originally, and in my ignorance, I decided to turn into a mixed border in true cottage garden style. I chose relatively drought-tolerant perennials and laboured for about five years. Everything that didn’t die looked shabby, sparse and miserable.

The September following the fifth summer I was expecting a visit from a distinguished group of gardeners. No rain had fallen and my border looked even worse than usual. I’d had enough. I cut all the perennials down to the ground, ordered a truckful of local gravel and spent the day before the visit spreading a 40cm layer of it over my former mixed border. When I returned in the early spring, those perennials that had come back looked stronger and healthier than ever before. I began adding other plants and the border gradually turned into a delight. 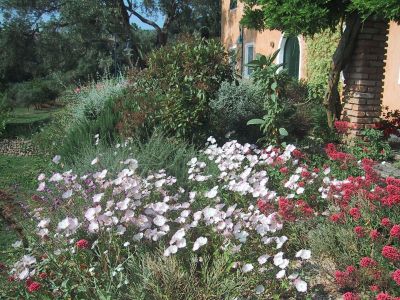 Gravel bed in May 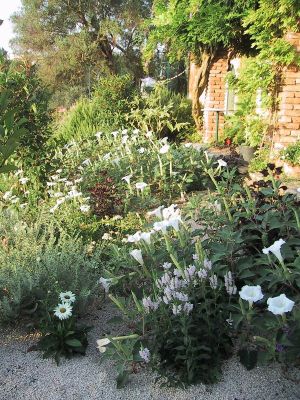 The olive press
In the late 1990s we decided to restore and use as a studio the ruined former olive mill – a squat building with three-feet-thick walls and tiny windows that maintained an enviable coolness in the hot months. It was situated in a very old olive grove.

The areas round the olive trees we turned into irregular raised beds by building low dry-stone walls around them with field stones. The same stones of varying sizes were used as rough cobbles for the dug-up areas between the trees and surrounding the house. It is a traditional local method called covolado that uses no cement, just a foundation layer of grit or coarse builder’s sand.

In most of the olive tree beds we planted the bulbs that are naturalised in our area. In December and January this means two kinds of fragrant narcissus, in late March and early April it is the bicoloured purple bearded irises, while in September it is Amaryllis belladonns, followed by Cyclamen hederifolium which lasts till December. 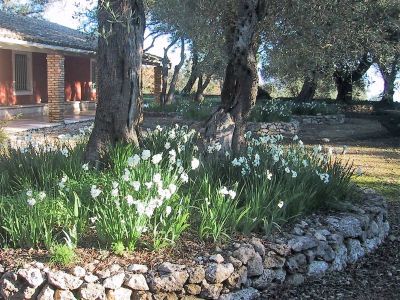 Our meadow, the anti-lawn
Below our terraces, looking towards the sea, and up to the low stone wall marking the end of our property is a large flat area, a lawn of sorts which we call “the meadow.” It is covered with natural grasses or weeds which begin to grow after the first rain at the end of August. By late September the grasses are tall enough to get a first mowing. In late October it is mowed again, and then left to its own devices through the colder months when it is green and lush, but doesn’t get taller.

By March it is dotted with wild flowers, white yellow and pink, and by April they're getting taller by the day. Usually that’s the time to mow again so that things don’t get out of hand. By the next mowing, in late May, grass and flowers are past their prime and beginning to wilt and dry. It is mown now to keep the lawn looking neat and tidy in July and August when it's dry and brown. 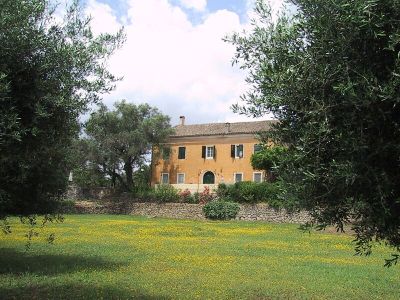 Even in August, however, there are always dampish pockets near walls that are carpeted with wild mint and produce pleasant surprises like Ranunculus arvensis. Then, with the first rain in late August or September, our lawn begins to grow again. 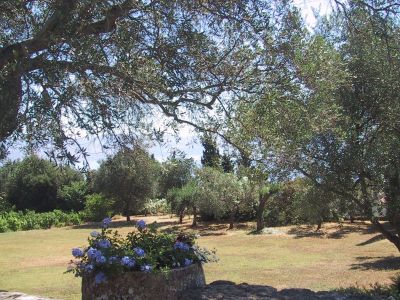 This garden is a work in progress. Plants come and go, not always intentionally. The weak die and the strong flourish. New vistas open and old ones shrink. New discoveries add a different accent to a familiar spot.    What doesn't change is the need to grow and develop, within nature and tradition.