Photographs to illustrate the article published in The Mediterranean Garden No. 98, October 2019.

The photo at the top of this page shows the Benedictine monastery complex at Lokrum with the Maximillian tower, viewed from Fort Royal (Photo Mara Marić)

The island of Lokrum lies off the coast of Croatia, about 600 metres from the historic city of Dubrovnik. Mara Marić has studied the gardens created there in the 1860s by Archduke Maximilian of Austria and the modern plans for their restoration. She writes:

Lokrum has always been an important strategic point for Dubrovnik: a stronghold guarding the city’s walls, an observation post, a green oasis, and also a harbour facing the city, protecting it from strong winds and waves rolling in from the open sea.

Benedictine monks arrived in 1023; until the great earthquake of 1667 the Lokrum Benedictine complex was one of the most impressive monasteries on the eastern coast of the Adriatic Sea. There were ornamental gardens situated within two spacious cloisters. The Benedictines left the island in 1798 and in 1815 it fell under Austrian rule.

Lokrum was bought as a gift for Archduke Maximilian of Austria by his wife, the Archduchess Charlotte, in 1858.

Maximilian was a passionate botanist and horticulturalist, and the Lokrum complex was intended to serve not only as a summer residence but also as a sort of experimental station for the acclimatisation and propagation of exotic plant species. Maximilian had both sponsored and participated in two great botanical expeditions and some of the seeds collected during these expeditions found their way to the garden at Lokrum. Entrance to the gardens

Maximilian’s plans included the introduction of exotic plants into the existing vegetation consisting of Mediterranean maquis and forests, treating the whole island as a park, while preserving the majority of the island’s native vegetation.

Around the monastery complex, Maximilian formed decorative gardens, private gardens reserved for himself and Charlotte on the western side and public gardens on the eastern side.

The western gardens were inspired by the late 17th-century El Retiro garden in Malaga, with its cascading flights of steps, terrace and fountains. Flowery meadows on the west side of the islands

The name of the eastern garden, Alameda, comes from the term used for a Spanish promenade in the shade of tall trees. A nursery was built where native plant species, such as the strawberry tree (Arbutus unedo) and the Mediterranean cypress (Cupressus sempervirens), were propagated and then planted along the promenades of the Alameda garden. At the intersections of these avenues, circular gardens were established for each exotic plant species.

He built his romantic English landscape gardens in the southern part of the island by forming numerous curved promenades with benches in prominent positions. Entrance to the English romantic garden


The style of Maximilian’s garden can be described as a combination of formal and romantic, including the significant influence of the Gardenesque style, typical of the second half of the 19th century. A greenhouse and an outdoor plant nursery were designed on Lokrum, the purpose of which was to experiment with plants collected during Maximilian’s expeditions. 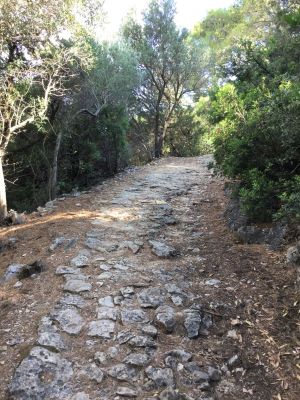 Pathway in the romantic garden


In 1864 Maximilian left Lokrum to be installed as Emperor of Mexico, but just three years later he was overthrown by a popular rebellion and executed by firing squad, aged only 34. The decades of neglect which followed damaged the gardens and it was a century and a half after they were created that the first detailed research was done.

The City of Dubrovnik and the Lokrum Nature Reserve which manages the gardens are currently drawing up a detailed restoration project. Then it is hoped the garden surrounding the residence will be reconstructed and Maximilian’s creation will once again be considered one of the most important sites of European garden heritage. 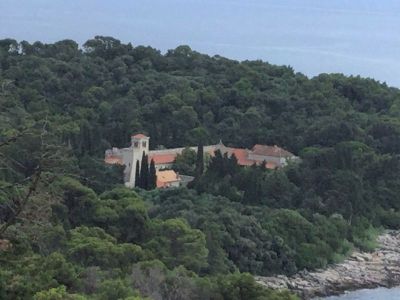 Benedictine monastery complex at Lokrum with the Maximillian tower, viewed from Fort Royal