The photo at the top of this page shows Salvias and decorative grasses (e.g. Muhlenbergia capillaris) on either side of the gravel avenue at the Gryllis nursery (Photo Edith Haeuser)

The 2019 AGM was held in Athens and marked 25 years of the MGS. Edith Haeuser shares with us her account of the main tour. She writes:

It was again a great pleasure to see so many friends who had travelled from near and far, all sharing a similar love of mediterranean plants and gardens. On my way to Athens I thought happily that they would surely have prepared a special programme for this year’s AGM. And so it was. On the first morning we visited “our” garden of Sparoza in Peania, the headquarters of the MGS. As we walked slowly towards the house, I was fascinated by the glowing yellow Sternbergia lutea and by the little cyclamens blooming here and there. Many plants were still summer-dormant, and no autumn rain was in sight. I walked below the house in the dappled shade of a graceful Pistacia lentiscus tree, a group of Cupressus sempervirens and Cupressus arizonica, listened to the numerous birds in the trees and enjoyed an unforgettable scent of conifers, surely from the Arizona cypresses, a scent enhanced by the very warm weather. 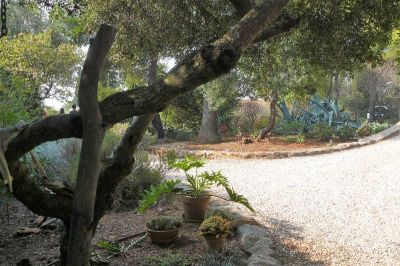 I must admit that I quite forgot myself amidst those trees, so much so that all of the many other trees and plants, such as Lavandula multifida, the beautiful carpet-like silver Artemisia pedemontana, the many salvias, for example the elegant Salvia discolor,a Duranta erecta,a lovely Tradescantia sillamontana, became unimportant. When I finally entered the house to have a refreshing drink in the living room, I was again intrigued by the architecture. It is a timeless masterpiece. During the General Assembly, Sally Razelou, the custodian of Sparoza, shared with us some of her memories of the earliest days of the MGS, and we heard that for the first three years the General Assembly had been held in that very living room. 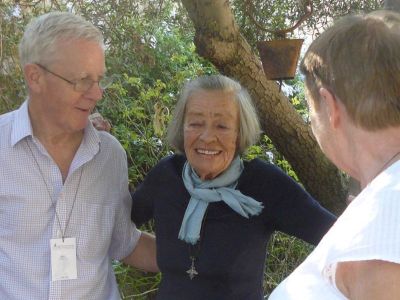 Sally Razelou with two participants of our group

Afterwards, also in Peania, we were shown the Goat Garden, a very small, but incredibly rich garden. MGS member Eleftherios Dariotis, a professional seed and bulb specialist, created this garden five years ago. It had been watered only during the first two years. I was fascinated by the sheer abundance of species: more than 350 different plants, including sixty-five salvias, many of which I did not even know by name. I was amazed by the beauty of this absolutely drought-tolerant garden, a sea of subtle pastel colours, some with shades of greyish-silvery leaves, leathery ones, or velvet-like hairy ones.

Eleftherios Dariotis’ second garden, his Salvia Garden, is feast of colours as in a painting by Henri Matisse (I knew that my camera would not be able to reproduce this effect), a composition of pink, magenta, purple, pale rose, white and interspersed dramatic tones of blue, all salvias and all planted so closely together that they formed an almost impenetrable thicket to the right of the garden path. 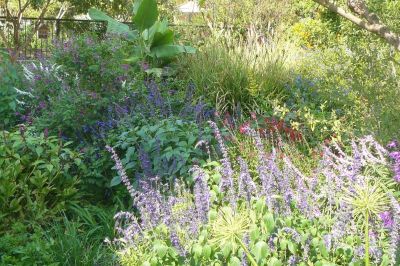 For lunch we went to the Vorres Museum, also located in Peania. The apéritif was served in a courtyard shaded by lovely Citrus × aurantium or bitter orange trees and a magnificent fifty-year old Laurus nobilis. 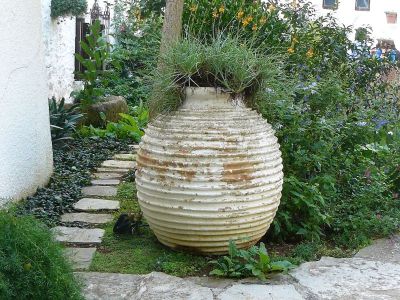 Old pithos at the Vorres Museum, planted with Bulbine frutescens

After a festive lunch, served at round tables arranged under pine trees, it was time to begin the tour of the museum and the gardens, which have recently been improved with the help of Eleftherios Dariotis. Here between the old low houses and walls, the beauty and harmonious atmosphere of the lush planting was accentuated. I remember a Leonotis leonurus with its intricately-shaped orange flowers growing gracefully by a beautiful old well. A dry garden is now under construction on large terraces behind the house, surrounded by pine trees and a row of cypresses. 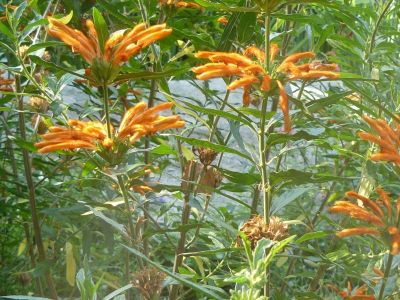 Leonotis leonurus at the Vorres Museum

On Saturday morning we visited the Pyrgos Vasilissis, the Queen’s Tower, in a western suburb of Athens. King Otto bought the land for his wife Queen Amalia in the 19th Century and had a small castle built in neo-gothic style with ramparts and polygonal towers. Three years ago, the Tower was carefully restored and opened to the public. From the Tower one can see the formal layout of the garden surrounding this romantic summer house, and the agricultural area, which altogether still comprises 30 hectares and has been owned by the same family for five generations. I enjoyed the relaxing morning in this oasis of tranquillity, strolling past huge carob tree hedges and hedges of Laurus nobilis and Pittosporum tobira, past gigantic cypresses, past horses grazing, olive trees, and fields of kitchen herbs. 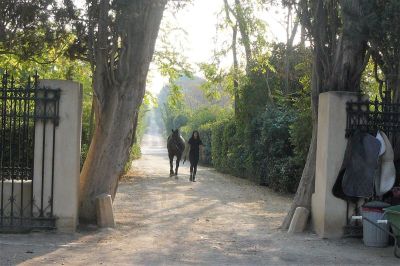 The tranquil atmosphere at the Pyrgos Vasilissis

Queen Amalia planned it as a model farm where the latest agricultural methods should be used, which it still is with its organic wine, olive and herb production. We enjoyed some delicious wine tasting before we had a copious lunch in the refreshing shade of a large pergola. 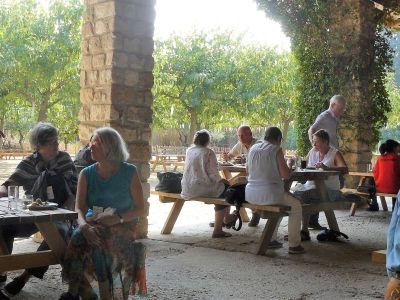 After lunch I opted to visit the 27,000-square-metre nursery run by MGS member Ioannis Gryllis at the edge of Marathon. Our coach took the scenic route through beautifully forested mountains. The broad gravel avenue lined on either side with what could be called a mediterranean mixed border of lush planting: mainly salvias mixed with decorative grasses, all densely planted, an intricate composition of colours and textures. What a marvellous sight! (see the photo at the top of this page).

With great enthusiasm Ioannis Gryllis commented on his plants as we walked along the mixed border of salmon-coloured Salvia somalensis, S. ‘CherryPie’ with white and bright red blossoms on the same plant, then pale rose-blossomed S. × jamensis ‘Peter Vidgeon’, S. leucantha with its purple-white flowers, and the magical blue S. coerulea (formerly S. guaranitica), among others. 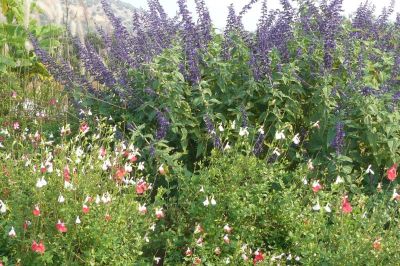 Ioannis is also a specialist in water-lilies. His solution against mosquitoes and their larvae is Gambusia affinis, the mosquito fish, an inconspicuous, small freshwater fish that deals with both of them. A tempting idea, it crossed my mind as I admired the violet-blue Egyptian lotus, Nymphaea nouchali var. caerulea… 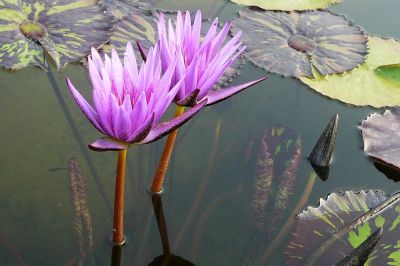 One could spend a whole day at this nursery, which can offer more than seven hundred different plants, and would always want to go back. I loved the large dog kennel with magnificent succulent roof planting. We thought we would be offered some refreshments; Ioannis Gryllis’ mother must have worked in the kitchen for hours preparing delicacies for us, a kind of Greek high tea, ending with impressive desserts. I think everybody was overwhelmed by that hospitality. To me it rang a bell … in ancient Greece they had cultivated a special hospitality towards xenoi or strangers. Not for nothing is the word hospitality philoxenia in Greek. On my flight back to Spain I thought gratefully of this memorable and inspiring AGM. 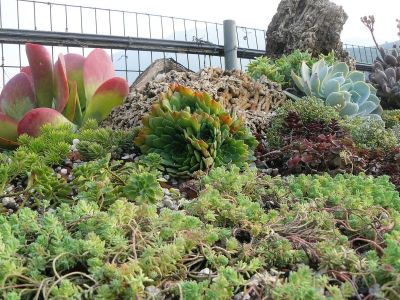 Succulent planting on the roof of the dog kennel, Gryllis nursery