Ann Semaan Beisch went on the Post-AGM tour of the Pelion peninsular and brings us some of her impressions and reflections. She writes:

I was in the middle of nowhere, surrounded by herbs, chestnut trees and a barely visible horizon as it blended into the Pagasetic Gulf, disappearing in a veiled and muted sunset. 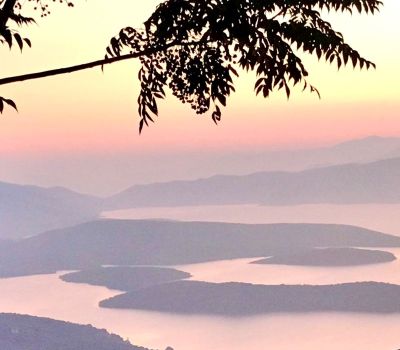 The herbs were everywhere, in my tea, under my pillows, in the salads, dried and tied in coarse bouquets, their soothing scent permeating everything. Alongside the patches of the ancient kalderimi, an old stone walkway that connects the mountain villages since before the time of asphalt highways, wild herbs and medicinal plants continue to poke their heads out among its aged stones. The natives and almost-natives are in the gardens, the walkways, the forest paths, unassuming and yet prevalent. 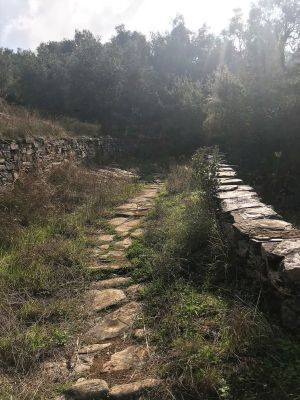 The Pelion peninsula is like the little finger of one’s hand, jutting out into the sea, and then curving back in on the tip of Greece’s eastern coast. The peninsula is 80 kilometres long and 35 kilometres wide, with a varied landscape that starts in the north with Mount Pelion itself at 1600 metres, rugged and green. A ridge of hills runs down from the mountain to the southernmost tip, its slopes as thick with chestnut forests and olive groves as they are with myths. 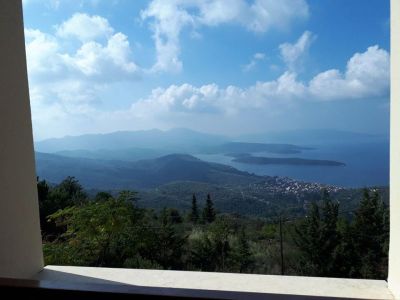 A view of the Pelion peninsular (Sue Wake)

I was in Lafkos, the flower village, on the south-west end of the peninsula, with my fellow Mediterranean Garden Society members, as we celebrated together in a tour after our Annual General Meeting in Athens. MGS member Sue Wake, a Pelion resident, was our affable and expert local guide. From the moment the urban was left behind and this remote and rural peninsula of Pelion began, I knew it was going to be a pleasing nowhere in which to be.

A late afternoon lunch on a sunny autumn day in the mountain village of Kissos was a treat as we experienced the perfect Greek dish, fasolada or bean soup, prepared in the classic Greek cooking method, ladhera (with oil) using local ingredients including basil (Ocimum basilicum), Greek mountain oregano (Origanum vulgare subsp. hirtum), and for this dish, a variety of fresh and dried beans and tomatoes. The hearty flavours of the fasolada captured the feel of autumn in Pelion. 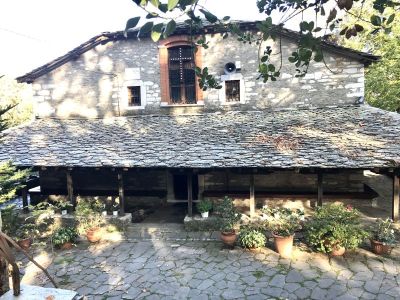 In the nearby hillside village of Tsagarada was shaded by a huge, very old and gnarled plane tree, Platanus orientalis whose branches extended over the whole of the square. As the sun began to dip, the light filtered through these branches, creating dancing shadows. This region consists of broad-leaved deciduous trees such as the plane tree, Platanus orientalis, and the ever-present chestnut tree, Castanea sativa, which fill the nearby forests. Above Tsagarada, in the undergrowth of the forests the herbal and medicinal flora of Pelion flourish. 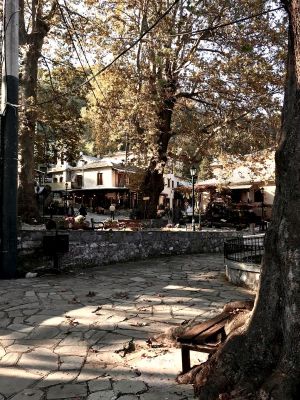 A little further north, in the tiny village of Kerassia, we were introduced to the 54 varieties of orchids that hide in the fields surrounding the village. With energy and enthusiasm, Dr Dimitris Oikonomidis welcomed members to his study of Pelion Orchids at his centre and took us on a hunt. Through his local work, he ‘rediscovered’ the intricate local orchid, Ophrys × delphinensis, in fields above Kerassia. High above the village, in fields stretching up the mountainside, we began searching for the tender and tiny orchids. A few very slim examples were pointed out by our passionate host. 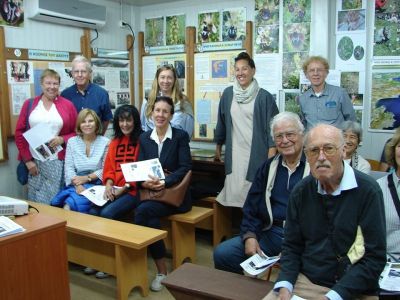 On another day, we strolled through the charming, intense hillside garden of MGS member, architect and artists, Vida Chung and her husband, Vito. Every view on each descending terrace of this Mediterranean- and tropical-planted garden was of the water. 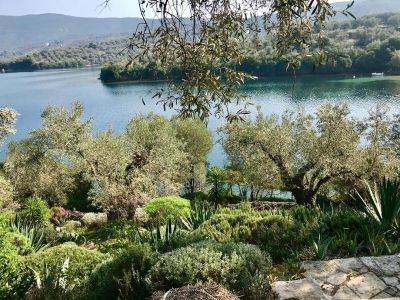 A narrow inlet from the gulf created a smooth ice-blue surface that perfectly reflected the evergreen trees growing right down to the coastline across the inlet. With a play of sunlight, the ice-blue recedes into numerous shades of grey and the green reflections shimmer on the surface of the water. This garden and ultra-naturalistic open house are so entrenched in the local flora that they appear to have always been part of the landscape. 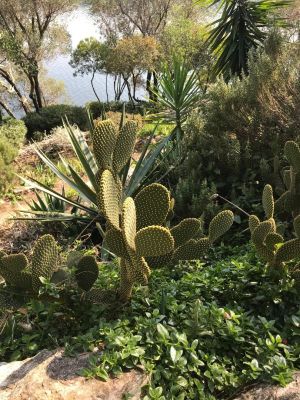 One chilly morning in Lafkos we meandered in and around the village, the private gardens and then the open space beyond, exploring the Greek shrublands that cover this lower mountainous region. Aromatic and pharmaceutical plants were everywhere. The word pharmaceutical has its origins in ancient Greece, where the word pharmakeia referred to the use of herbal drugs, potions and charms, as well as magic. On this walk we occasionally collected tiny snatches of plants like the Greek sage (Salvia fruticosa), thyme (Thymus spp.) and the local Greek mountain tea (Sideritis spp.), the crocus-like Sternbergia lutea with its fading yellow blooms, and, probably, chamomile (Cladanthus mixtus) as well as lemon verbena (Aloysia citriodora) and a variety of peppermints, to name but a few. 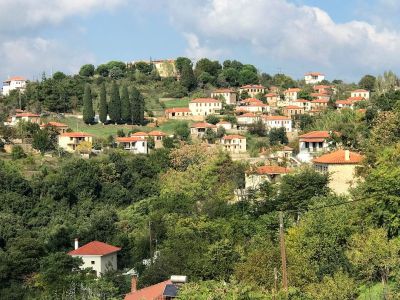 When we were not looking out to the sea, the distinctive architecture of the village houses was a pleasure to behold. This Pelion style is a noted characteristic of all twenty-four villages in the Pelion peninsula. These houses are built on terraces cut out of the hillsides, with exterior façades of expertly carved local stone and red clay. In the guesthouse I stayed at in Lafkos, the structure was three storeys high with tall windows, carved chestnut wood panelled interiors, and wonderful views of the town and surrounding countryside. The stone exterior arose from a slate courtyard covered in moss and ivy which was home to many friendly kittens. 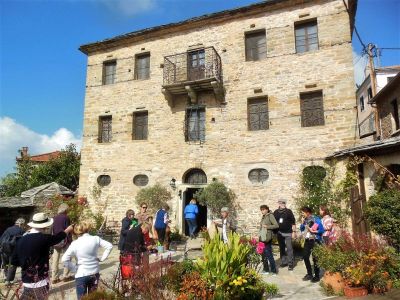 On a quiet terrace at the main house, the essence of Pelion seeped into me in a mélange of blues from the sea, the greens of the slopes, the deep ochre of the ancient stones and the warm earth, and the scent of the dried herbs and pines. The peace engulfing me at the beginning of each day was pure magic.