The Western Australia Branch of the MGS

This branch was established early in 2018 to promote climate appropriate - mediterranean - gardening in the Perth and south west areas of Western Australia. We encourage people to join the MGS through a program of branch activities which include garden and nursery visits, plant exchanges and speakers.

Events are held on a Sunday four or five times per year. All events are very informal other than an annual meeting when an agenda is developed. A website of suitable plants for local Mediterranean gardens was created by members in October 2020 so that their experience could be shared.

New and prospective members are welcome to contact the Branch Head Margot Tobin (biography) via email.

For information on plants suitable for Perth mediterranean gardens follow this link. Local members who would like to add to this may email information and a photograph to MedGarden@protonmail.com.

The photograph at the top of this page shows Everlastings (Rhodanthe chlorocephala). A native Australian daisy belonging to the family Asteraceae, it grows naturally in the south of Western Australia. Photo by Margot Tobin.

31 January - Wattleup and Coogee
Visit to Wattleup Nursery and to Coogee Common kitchen garden
The WA Branch will meet at Wattleup Nursery to see a large range of plants suitable for mediterranean gardens. We will then visit Coogee Common for a guided tour of the extensive mediterranean style kitchen garden before having lunch in the restaurant (fee payable for Coogee Common). The garden supplies fresh vegetables, herbs and fruit to Bread in Common in Fremantle as well as Coogee Common. Menus are based on seasonal produce which includes many heirloom varieties. The garden design and renovation of the historic buildings onsite are interesting to see as there are considerable site challenges including the salty coastal winds. 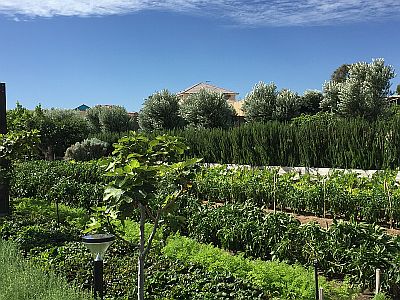 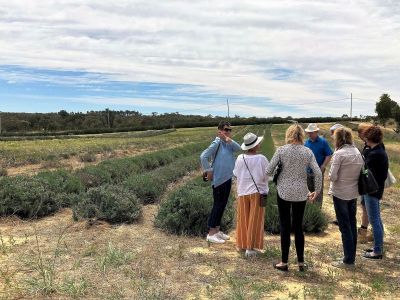 Members learning about the various lavenders

The oil is extracted from the flowers using a steam process and all parts of the plant are used on the property. The lavender farm was established about three years ago to replace a turf farm and the owners have won several awards for the quality of their oil. 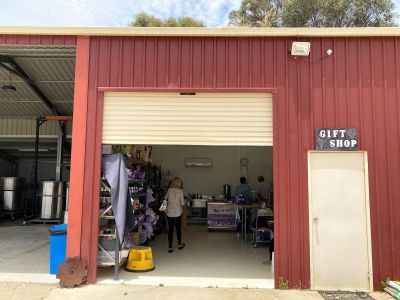 After tasting several varieties of lavender ice cream, we went to the Yanchep National Park for lunch and a walk. 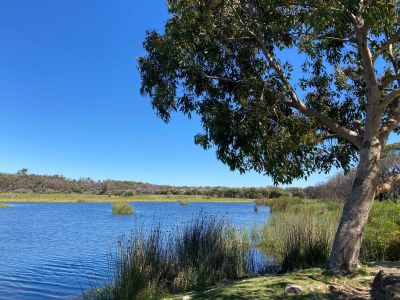 The park was affected by fire in December 2019, so part of the walk took us through a surreal landscape. 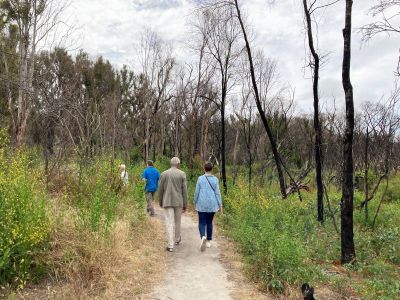 Walking through a surreal landscape 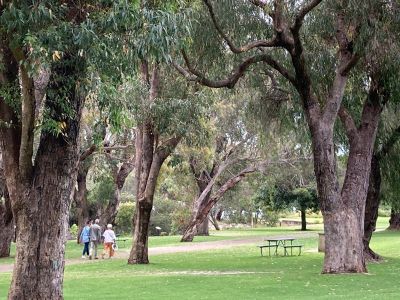 Returning to the more manicured section of the park

On the walk we encountered kangaroos and kookaburras. 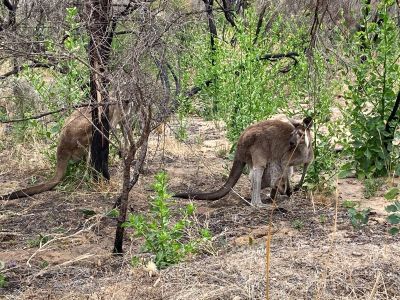 Encountering kangaroos on the walk – spot the joey

October 2020
WA Branch Meeting at Zephs Nursery
The WA Branch meeting at Zephs Nursery generated lots of enthusiasm and discussion on Mediterranean gardening. International and Branch level updates were given, with Margot Tobin endorsed as the Branch Head going forward. Nurseryman Scott Robinson spoke about Pelargoniums and Geraniums, using a book titled “Hardy Geraniums” to illustrate the point that “hardy” depended on the climate and care should be taken to determine appropriate plants for our climate. He showed us a couple of examples of geraniums which would do well in the Perth area. Generally, pelargoniums that originate in South Africa should do well whilst geraniums from the Himalayas, such as Geranium Rozanne would not. The Geranium sanguineum (bloody cranesbill) self-sows and does well at Zephs. Members felt strongly that they would like to have a place to share experience of growing plants suitable for the Perth and south west WA climate, noting that soils varied considerably between the Swan Coastal Plain and the Darling Scarp (Perth Hills). Work has started on a simple website for this purpose. 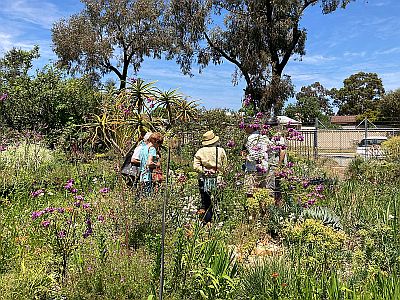 January 2020
Tour of Riot and Restraint - Coastal Mediterranean Gardening in North Fremantle
A group of members and prospective members welcomed in the new decade with a drink and snacks as we wandered in the late afternoon shade of the eight-year-old olive trees. A Dracaena draco (Canary Islands dragon tree) has branched perfectly and will eventually form an interesting canopy above head height. 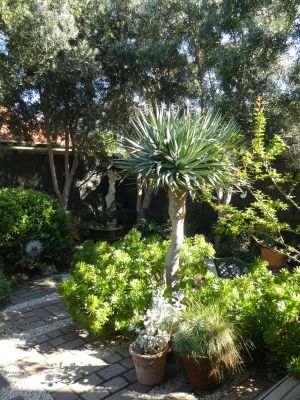 Some WA natives are being trialled in pots and in the garden beds. In another area a new bed was planted with various salvias, agapanthus and other flowering plants. The tour was followed by a presentation and discussion on the 2019 AGM held in Greece. As it grew dark, a few of the stayers picked bags of figs to take home. 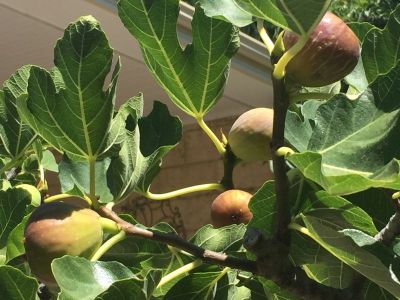 An abundance of figs

Pamela’s Garden Plus One

We visited two lovely gardens in the Perth Hills. The first was Pamela’s garden which is on a steep site with a beautiful view from the front of the garden over the Perth coastal plain. This is a very pretty garden and as the visit took place in Spring, we enjoyed a glorious floral display including proteas, limonium, liliums, gazania, roses, delphiniums, poppies, hebe, hellebores and even a stand of orchids. Everything was growing well in just the right situation. 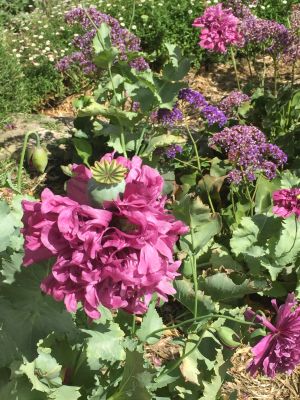 Poppies and Limonium at Pamela’s

After a sumptuous morning tea, we were treated to the large garden of artist Jenny Beahan. We meandered through with Jenny and admired the perfect placement of various plants and sculpture. Her use of colour really showed the artistic perspective on gardening. She has a good eye for pairing the right colour tone of a plant with its surroundings. Two French MGS members joined us for the day and were most interested in the native plants which included the everlastings in flower at Pamela’s and an extensive array of natives in Jenny’s large garden. Our visits finished with lunch at a nearby pub which was very well attended. 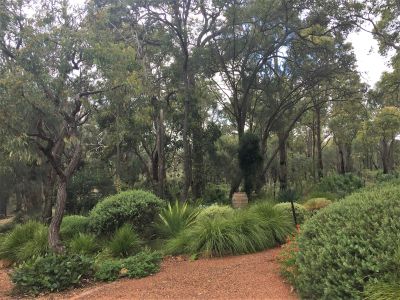 On a very hot day for early Spring, gardening and media personality Deryn Thorpe welcomed us to her large garden close to the city in Mt Lawley. Her English heritage influences the design and choice of plants for this garden though she and her husband work extensively with native plants on other projects. She showed us the Mediterranean section of the garden which is exposed to sun and has the hardiest of plants. The ‘fertigation’ system she has established was also interesting with water and nutrients supplied where required via the irrigation system in place. 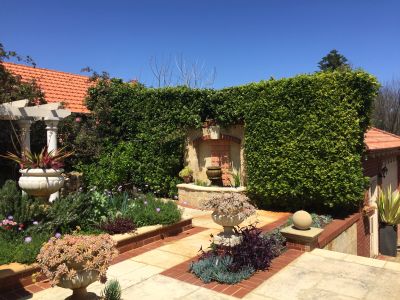 Deryn’s Mediterranean section of the garden

We visited two lovely gardens in Gooseberry Hill. Perth had a week of rain and wind in the week prior to our visit so full credit to the devoted garden owners who presented their gardens so well. The first garden was relatively flat, full of Mediterranean plants complemented by interesting sculptures one of which welcomed us with oranges. 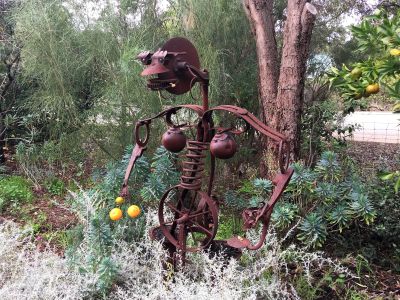 The second garden of the day sits on a very steep site with magnificent views over the Perth coastal plain. The owner amused us with some colourful stories on challenges she has. One that is yet to be solved is the presence of a large pine tree which constantly drops needles, overwhelming anything underneath. There was a myriad of suggestions, some of which can’t be repeated here! 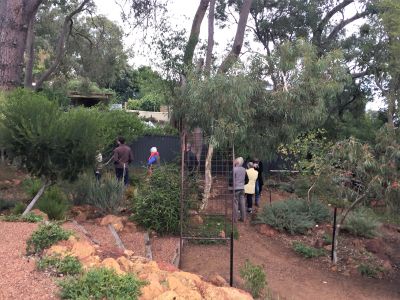 Gardening on a steep site under a pine tree

The meeting at Zephs Nursery was an opportunity for members and friends to discuss progress of the branch and plans for the future. Membership is increasing and awareness of the MGS growing. The MGS aims and branch role were reviewed along with a report for 2018. An MGS WA Committee was agreed consisting of Margot Tobin (Branch Head); Nieve Smyth and Carlindi Holling as Committee Members. 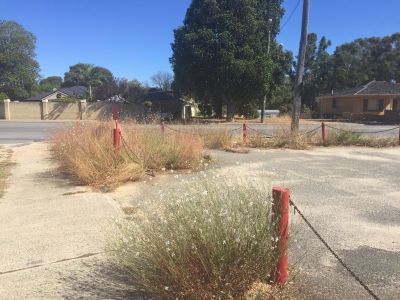 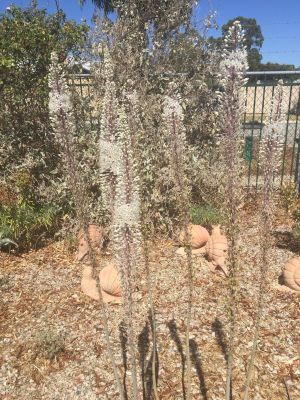 Spires of Drimia maritima flowering at Zephs. Not seen in this photo are the huge papery bulbs at the base or the bees buzzing around those flowers

We gathered everyone in the kitchen to grab a glass of wine before taking a tour around the interesting and diverse garden of one of our members. We circumnavigated the house by starting in the perennial walk, noting several unusual plants such as the Euphorbia lambii. Then it was up to the pool terrace, under the tree ferns, through the native garden and back to the kitchen via the bountiful produce garden. Figs were not yet ripe but there were plenty of other things we tasted. We then viewed a selection of slides from the MGS AGM and tours in Spain during October 2018. The photos and ensuing discussion generated much interest in mediterranean gardening and travel, particularly the visit to Heidi Gildemeister’s property in the UNESCO World Heritage listed Tramuntana Mountains. 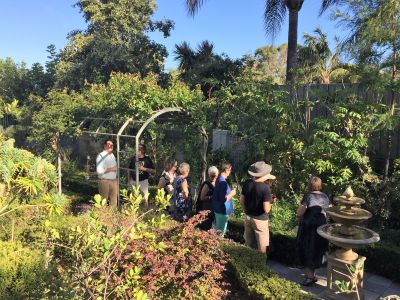 A visit to the large garden “Orange Grove” started with morning tea on the verandah. We then started our wander, some with cups in hand, meandering through the garden. Some went with our knowledgeable garden owner who pointed out various plants and told us of trials and tribulations. There were also many delights and successes, particularly the clever planting of several clematis into large plastic pots which were then buried in the ground. It is then much easier to control moisture and fertiliser to ensure good growth and flowering. 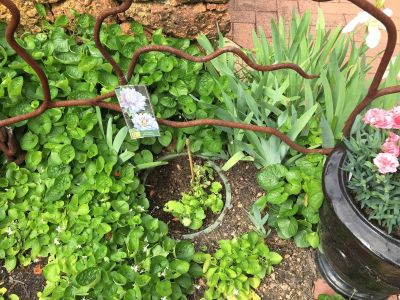 Clematis in pots in ground

The garden walk started with stories about water, always a topic of conversation in Western Australia. Perth has had good rain this winter and many gardens are better for it. However, at Orange Grove, the water tanks had run almost dry for house and garden and it took much investigation to determine that some underground pipes had broken and further, a pipe from roof to tank had not been connected by a plumber. 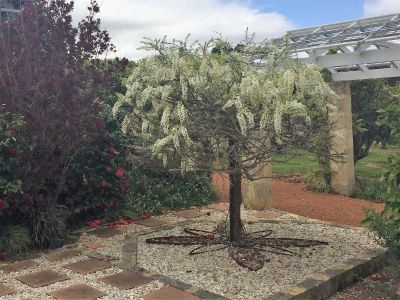 There was much in flower, so the garden did not disappoint. The sculptures around the property added to the interest. One of the features of the garden was a very old wisteria shaped to look like a tree. It is doing well and stands out amongst the more commonly seen blue wisteria. A tree that caught my eye is a very old white cedar (called Cape Lilacs in Western Australia.) Its beautiful branches look like arms that could sweep one up! 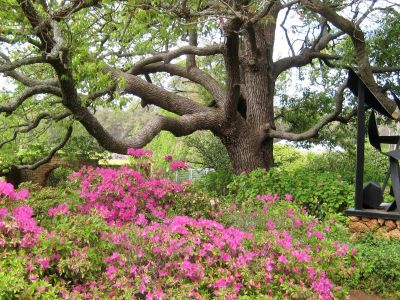 Cape lilac tree with azaleas underneath 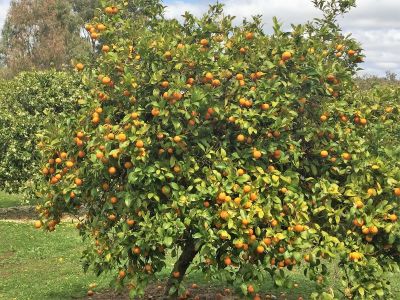 The orange orchard was a mix of late fruiting trees and trees in blossom. Alas it was not the right time for any to take home.

After a leisurely picnic style lunch our visit ended with an enthusiastic plant swap. Everyone came away with several plants and there was time left to go home to dig them in.

May 2018
Visit to the garden of Riot and Restraint, North Fremantle

A visit to the garden “Riot and Restraint” featured in TMG 92. Morning tea was taken as we wandered around the garden. 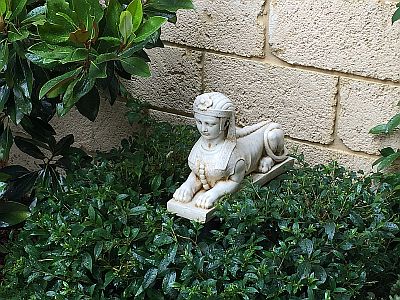 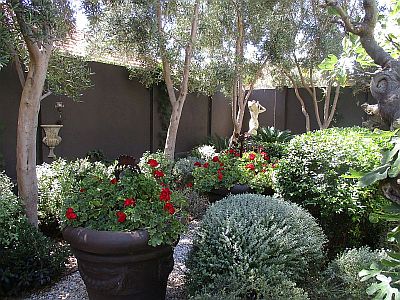 Afternoon sunshine in the midst of restraint

There was much interest in a succulent that has grown to about 1.5 metres just near the outdoor shower. It is Kalanchoe ‘Napoléon’s Bonnet’ but is also known as Kalanchoe ‘Shovel Nose’.  It is probably Kalanchoe beharensis and goes by the name of Kalanchoe Elephants ear as well. Fortunately, a couple of members took cuttings as a week later it split and fell over so is now about a quarter of the size. I think it needs to be shaped into a tree as it is just too heavy when bushy. 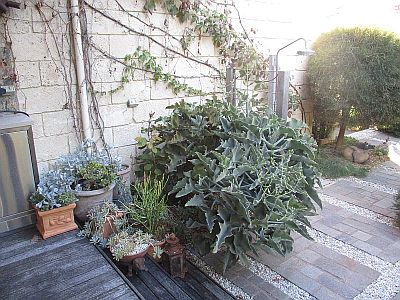 This was followed by a photo presentation of the highlights of the Southern California AGM and tour. After lunch, we walked past a nearby garden with good colour selection and then back via our local succulent nursery Zerascapes where everybody found a new treasure to take home.

Biography of Margot Tobin
Branch Head Margot lives and gardens in Fremantle on limestone soil. Salt-laden winds blow for nine months of the year. She has been a member of the MGS since 2012 and finds the travel to its meetings stimulating and fun. 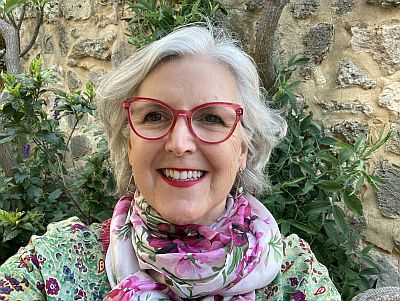 She initially attended the AGM in Adelaide in 2012, then Menton in 2014 and Southern California in 2017. Gardening is her passion and green is her favourite colour.