Citrus growing is a subject which interests nearly everyone who gardens in mediterranean-climate areas. Old gardens in town and country will almost certainly have at least one lemon tree and probably a Seville orange tree as well, while those of us planting new gardens will want to try out some of the many interesting citrus varieties. What could be more appealing – compact trees with bright green leaves all year round and wonderfully scented blossom, as well as fruit which can be harvested over a long season.
Many members of the MGS have become experts in citrus growing over the years and have offered their experience for all to share: two of their articles printed below.

Citrus in California
California has areas of intense citrus cultivation and our Branch in North California has suggested these links:
University of California Integrated Pest Management pages on citrus. These pages address cultural tips, invasive pests (California centric) and other pests, disorders and diseases that affect citrus. Really for the citrus lover. Four Winds Growers, is a local legend in citrus. The Dillon family originated the Meyer Lemon, a cross between lemon and orange here in California that many people love. Their pages are full of excellent information about growing citrus in a mediterranean climate.

Citrus in Italy
Oscar Tintori in the Arno valley east of Pisa has an astonishing range of different varieties of citrus. He also offers therapy for distressed citrus plants.

In Mallorca there is a sunny, humid and fertile valley, between the Tramontana mountains and the sea, where traditionally orange trees are grown. Frosts are practically unknown here as the valley is well protected from all winds by the surrounding mountains. All these factors, together with its favourable soil (a mixture of clay and limestone), as well as a reasonable distance from the seashore, make it an ideal location for growing citrus trees. A century ago the fruit was exported from its port (Puerto de Sóller) to the south of France and, through many of the local families, strong commercial and cultural links were established between the two countries. The citrus orchards were small and worked by family members, some of whom were sent to handle their interests in France.

In recent years, many of the younger generation have preferred working in hotels or moving to the capital in Palma and some of the farms have passed into the hands of 'forasteros' and 'extranjeros' – i.e. those coming from mainland Spain or further afield.
Two such farms: Ca'n Frontera (Birger and Peta Jensen) and Ses Brises (Jaime and Sacha Ruiz) are owned by members of the MGS.  During the past fifteen years the Ruizes have set up a tropical fruit section at Ses Brises (3,000 square metres with 140 citrus trees), described in TMG 69 and 70.

The Jensens at Ca'n Frontera have 260 citrus trees: 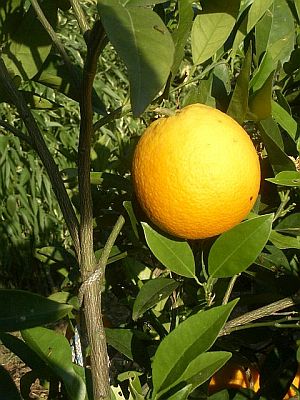 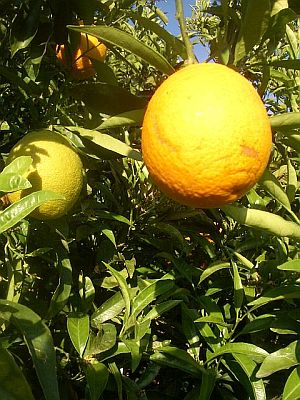 Watering
The average annual rainfall in Sóller is 800 mm, occurring from October to April. Intensive watering is therefore necessary during the long dry season. During their first five years at Ca'n Frontera, the Jensens used the traditional method of watering basins and channels made with a pharaonic spade. These were filled with water once a fortnight, with back-breaking effort, from May until after the first rains in September/start October. Now a drip system waters every tree, except for some lemons, for three hours three times a week at night from May until rains start in October, depending on heat and lack of rain.

Fertiliser
Twice a year, in May/June and September/October (after the rains start), all trees get two or three kilos per tree (depending on the size of the tree) of a citrus fertiliser compound which is sprinkled about one metre from the trunk (it must not touch the trunk). This is a mixture of: nitrogen (20 per cent), phosphorus pentoxide (12.2 per cent), potassium oxide (10 per cent), magnesium oxide 2 per cent), and sulphur trioxide (10 per cent). In addition to this, occasionally when trees seem to need it (yellowing leaves or general weakening), they get an additional small amount of magnesium.

Pruning
Every three years, after the fruit has been picked, branches are thinned out to maintain the strength of the trees and to facilitate light and air entering at all places. This includes clearing out the tree's interior and suppressing strong vertical shoots. Pruning often requires the removal of some large branches. (The jury is out as to whether cut areas should be treated with sealant.)

Spraying
The trees are sprayed annually with agricultural paraffin oil. This is done on a dry day after the first rains at the end of August or in early September. There must have been sufficient rain to arouse the leaves from their summer moisture-retaining mode.

Pests
Fly-traps are installed at the beginning of the dry season, strategically distributed around the orchard, to capture the fruit fly Ceratitis capitata. 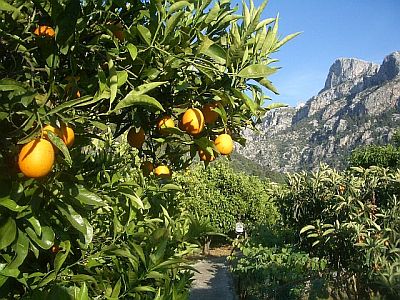 For two millennia or more, many gardens around the Mediterranean have had one or more lemon trees for their perfume, their fruit and their evergreen architectural effect. With the colonisation of the Americas and Australia, the lemon – like the olive tree – spread worldwide to all the mediterranean-climate locations in which MGS has branches today. The lemon tree could well be the emblem of the Society.

Choosing which variety to plant
Decisions on which lemon trees to plant need to take the following into account:

Pruning
If you have wisely planted a young one- or two-year-old perpetually flowering and fruiting variety, the following pruning pattern is recommended.

Stunting
Unfortunately in spite of having purchased an appropriate tree and started to prune it correctly, many owners see a stunting and even dying back of the lemon tree after a few years. The most common cause is that the tree was poorly planted, especially if the tree was in a tall narrow plastic sleeve container when purchased at a nursery. In many cases the roots in these sleeves are squashed together and start to intertwine with each other in the form of a corkscrew. If not separated and spread out when planted, within a few years the young roots entwine into a tight corkscrew which eventually strangles the tree. So if you plant a young tree do prepare a good planting hole and plant in friable soil enriched with composted manures rather than just sliding the roots and soil from the sleeve into a narrow planting hole and then feeding with granular chemical fertilisers. The latter not only encourage the growth of the corkscrew but irreversibly burn the smooth non-hairy surface of young roots.
With care from day one, there is no reason why lemon trees cannot grow into specimen trees that survive for many decades.

Some varieties of lemon trees by country / region

*Indicates the perpetual flowering/fruiting varieties
** From China: good for containers but with a single annual crop
Note: 'Eureka' was developed in California from Sicilian seed.
In addition to the above, there is also the citrus sometimes called Citrus medica var. sarcodactylus (although this name is uncertain) which we grow in a container as a novelty for its strange-shaped fruit, resembling a half-open clenched fist – hence its common name of Buddha's Hand, or Hand of Allah in Spain and Morocco. This variety is said to have arrived in Spain during the Moorish period.