What is a mediterranean climate?

The photograph at the top of this page shows the rocky coast of Puglia, Italy with Phlomis fruticosa growing wild in the foreground (Photo Sergio Ungaro)

Mediterranean-climate regions are found, roughly speaking, between 31 and 40 degrees latitude north and south of the equator, on the western side of continents. 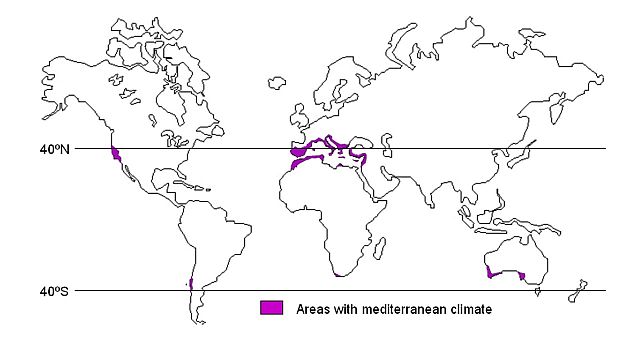 Yet they can extend eastwards for thousands of kilometers into arid regions if not arrested by mountains or confronted with moist climates, such as the summer rainfall that occurs in certain regions of Australia and South Africa. The most extended penetration goes from the Mediterranean Basin up into western Pakistan and into some areas of Turkmenistan and Uzbekistan (the source of many of our cherished bulbous plants).

In contrast, the mediterranean areas of California and Chile are constricted to the east by mountains closes to the Pacific coast. This is not the case, however, for Australia and South Africa, where monsoon troughs may bring summer rainstorms. In fact, the mediterranean-climate regions of both Australia and South Africa have important but unpredictable rainfall in the summer, a factor that has a significant effect on their vegetation.

The seasonality of the mediterranean climate differs profoundly from that of latitudes to the north or south. Writers, especially those from the north, tend to rave about the attractive features of the climate as "one continuous summer," "an ever-blue sky," or "everlasting sun." But those who live near the Mediterranean Sea know that these descriptions are not really accurate.

In most mediterranean regions climatic changes are pronounced. It is in the autumn – after summer drought and dormancy – that the yearly life cycle of plants starts anew, like the awakening in spring that follows winter dormancy in the north. As I write, in late autumn, the day is radiant and warm, and garden work is a joy. "Such a nice autumn," I say to the farmer, who replies, "Si, es el veranillo de San Martin." (Yes, it is the little summer of Saint Martin – 11th November) This "little summer" is known to last just a few days attesting to the variability of the mediterranean climate. 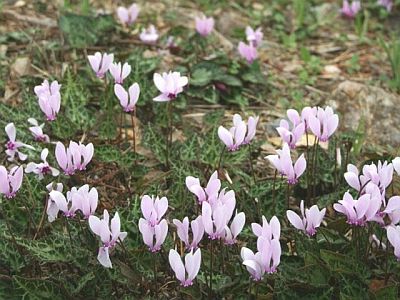 Autumn-flowering cyclamen in the MGS garden.
Photo by Chris Wassenberg

In winter, periods of rain alternate with warm, sunny days. We know that after three days of howling winds, during which one closes all windows, turns inwards and appreciates the solid walls of one’s house, one can expect mild, sunny days.

Later the splendid spring display is brought to an abrupt end by hot, dry winds and rising temperatures, which cause seeds to ripen and disperse. When the glorified “continuous summer” arrives it is painfully long, so that plants retire into dormancy, making us believe they are about to die. Indeed, a long, hot summer is required by most mediterranean bulbs if they are to go dormant and ripen in the dry ground. But that summer must be preceded by cool seasons (winter and spring) with soft rains that let the bulbs grow and sprout, so that their juicy stems and shiny foliage can develop in a humid soil before their jubilant spring display. These contrasts are characteristic of the mediterranean climate. 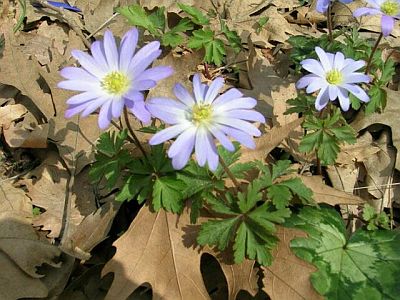 Anemone blanda flowering in March under a plane tree.
Photo by Davina Michaelide 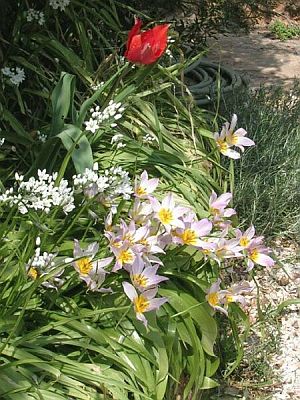 Irregularity of the rainfall, which can vary considerably from year to year, accentuates the severity of the mediterranean climate. Rain does not fall evenly. Generally speaking, you can register more rain in the north than in the south, more in the west than in the east of a continent. Nor does the rain arrive yearly at the same time or within the same intervals. In Gibraltar, for instance, rain starts falling nearly half a season earlier than at the Dead Sea. In the Holy Land no rain at all falls in summer but early rains may come in autumn – manna to the arid soil and parched riverbeds – though it is not until the winter rains that the basins fill.
This variability is true for temperatures. In winter the thermometer may fall to zero degrees Celsius and may even bring a short-lived frost, yet these temperatures depend a lot on the location of your house. In a hill garden, the clouds will hang low over the mountains, but on the coast in a protected corner you may enjoy the cherished winter sun. Mediterranean gardeners are grateful for their mild winters – mild enough for garden work to be an ongoing activity.

Heidi Gildemeister is a past president of the MGS with an established garden in Mallorca. Her previous publications include: Mediterranean Gardening, A waterwise Approach, Editorial Moll, Palma de Mallorca, 1995 ISBN 84-273-0749-7