Compost and how to make it

Some authors on gardening in hot dry climates advise against even attempting to make compost. But many MGS members have found that it is worthwhile and not so difficult really. Here we start with the basics from the MGS leaflet which covers compost. Then on to how one of the Garden Assistants at the MGS garden at Sparoza, Piers Goldson, adapted to the Sally Razelou method.

Compost making at Sparoza
By Piers Goldson TMG no. 39 January 2005. Piers was the compost king at Sparoza, but we have to remember that he was the full-time gardener; part-time and absentee gardeners have a harder time of it.

Compost
From the MGS leaflet: Gardening in a Mediterranean climate: Mulches and compost

What is compost?
Compost is a natural organic fertiliser which adds nutrients to the soil and improves soil structure. It is the product of the natural recycling, through decomposition, of organic waste from the kitchen and garden.

What can I make it from?
Dry leaves and grasses, withered flowers, annual weeds, finely chopped or shredded prunings from the garden (and grass cuttings from the lawn mower if you have a lawn), as well as fruit and vegetable peel of all kinds, coffee grounds and tea leaves from the kitchen and wood ash from the fireplace. Paper and cardboard can also be composted; in the mediterranean climate it is best to shred and moisten these before adding them. ‘Brown material’ – i.e. shredded prunings – and ‘green material’ – i.e. vegetable peel or lawn cuttings – need to be evenly mixed.

What should I not put on the compost pile?
Cooked food containing meat, fats or oil; the excrement of dogs and cats.

Can compost be made in a hot, dry climate?
Yes, although you will need to remember to keep it moist during the summer. It is a good idea to cover your compost (with, for example, a tarpaulin, a thick layer of damp newspaper or a bit of old carpet) to conserve moisture in summer and to prevent it from becoming waterlogged in winter.

Where do I make compost?
Compost can be made in well-drained pits about one metre deep, in boxes at least one metre square made of wooden slats or boards, or in one of the many types of compost bin available on the market. You may also use four wooden posts and chicken wire to make your compost container. In all cases, the front should be easily removable, both to facilitate regular turning of the compost and to enable you to take it out when it is ready. Do not make your compost on a concrete slab: not only does this prevent good drainage but it also prevents access by beneficial earthworms and soil micro-organisms. Whereas in temperate climates compost containers usually ensure good aeration by having air holes or spaces between the slats, in the mediterranean climate these tend to cause the outer layers of the compost to dry out too much. In hot, dry climates it is a good idea to line the sides of the compost container with cardboard from old cartons or thick layers of newspaper as you build up the material: this helps to retain moisture and the internal heat necessary for decomposition. It is a good idea to have at least two pits or bins, so that you are adding material to the second while the first is in the process of decomposing into a rich, crumbly, brown, odour-free ‘soil’.

Flies and grubs
To avoid attracting flies, it is a good idea when you add kitchen waste to the compost to cover it at once with a layer of shredded prunings or garden weeds. In the Mediterranean, the larvae of the rose chafer beetle are often found in compost (large, fat, unattractive pinkish-white grubs). These are not generally harmful to the garden but you should avoid introducing them to the soil of plants grown in pots, whose roots they may damage.

How long will it take?
About three months if there is a good mix of materials, turned once a month and kept moist (not too dry and not too soggy). With a correct balance of material but with no turning it will take from six months to a year. With a poor mix of materials and no intervention it will take longer. The more finely shredded the material is and the better mixed, the faster its decomposition.

How do I use it?
Compost can be dug into the soil before planting. It can also be mixed with garden soil to form a potting medium.

Compost making at Sparoza
By Piers Goldson TMG no. 39 January 2005 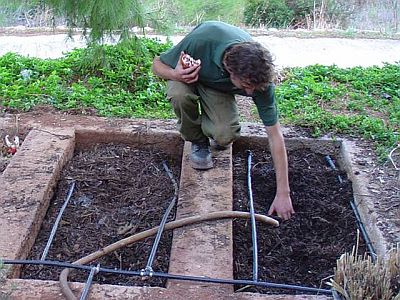 When I arrived at Sparoza in September 2004 there had been plenty of pruning of dead and damaged plants, the heavy snows and cold of the preceding unusually cold winter having caused much damage. The pruned material lay in vast piles and my first job for my first week was to send it all through a small hole of a shredder. I survived the first week and will soon be reaping the benefits in the nursery. In the gardens of Sparoza there is a three-compartment system of compost bins – or perhaps I should call them holes, because they are below soil level – with a depth of about 3 feet. 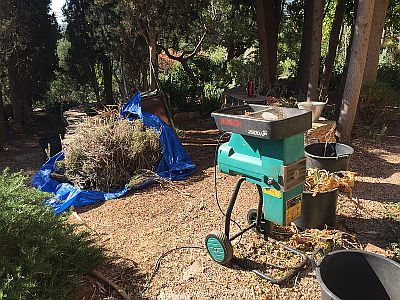 All the pruned material was shredded into the holes and mixed up with the South African succulent Mesembryanthemum cordifolium (syn. Aptenia cordifolia), a plant that grows very well through the summer and winter at Sparoza (it survives around -8°C). This was added as it is a great source of nitrogen which acts as a catalyst for composting. Incidentally, if you are short of a catalyst then common gardener’s urine works just as well; I added plenty of the latter and the temperature of the compost rapidly exceeded 57°C and indeed at times was barely touchable. (I also worked out that every time I aided the compost in this manner I saved 5 litres of water from flushing.) This type of subterranean compost bin requires more turning to keep it aerated – I generally do this when the temperature of the compost starts to drop. A consistently low temperature may mean that the compost is too dry, although compost that is ready also ceases to be hot: the gardener must use his or her own judgment as to which of these is the case. As an indication, compost that is ready is of a good, rich, dark colour and even texture (except for woody pieces which have not yet broken down – see below): all identifiable leaves and soft material will have been ‘digested’ and decomposed. At Sparoza, after less than two months of adding kitchen waste, including lots of coffee grounds, the compost will soon be ready for the nursery. It will be sieved to remove any un-composted wood which saps nitrogen from the soil and plants. This can be sent back to the bins for more composting. From the nursery the compost will go either into the garden around the roots of plants or off on its travels after the next MGS plant exchange. I only hope the volunteers will return to help us at Sparoza now that they know the wonderful soil in the nursery may still contain the remains of common gardener’s pee!

Compost, like most living things, needs irrigating and I am happy to know when I do my laundry in the gardener’s room that the phosphate-filled water from the washing machine goes directly to the compost bins. The advantage of the subterranean compost bins is that they hold their moisture well and require less water than compost heaps above ground, especially in a spectacularly dry area like Attica (although drainage in the bottom of the pit is very important). By contrast, the unshredded compost that was in the conventional above-ground bins near the nursery hadn’t really composted much at all, giving very little decomposed matter after many years. I was even able to identify in it many of the winter and spring annuals of 2003-2004, still nicely dried and preserved (some Cerinthe retorta still had colour in the flowers). This material has now all been shredded, reducing the size of the heap considerably, and with more frequent additions of water than the subterranean bins it is now also attaining temperatures of above 57°C.