This article appeared in The Mediterranean Garden No. 59, January 2010

In the summer of 2008, I undertook the manual irrigation of the garden at Sparoza in order to test the drought tolerance of the trees, shrubs and herbaceous plants found here. I abandoned the automatic watering system altogether. This experiment seems significantly interesting in retrospect as the dry season that year was prolonged.

Winter rainfall in 2007/2008 was average for East Attica - 451mm, the last rain falling on April 6th (apart from a meagre 3mm in May, not enough even to penetrate below the surface of the soil). In the third week of September 33mm of rain fell over three consecutive days. It seemed that the ‘second spring’ had arrived. The plants revived, the hillside took on a green hue, the earth softened under foot and many annuals germinated. Urginea maritima, Scilla autumnalis and Cyclamen graecum flowered. Only the nursery and plants in pots required watering. I felt I was on holiday…

Then days went by, and accumulated into weeks, and I took up the hose and watering can again for it was not until the 17th November that rain fell once more. I believe that this caused far greater stress to the plants, having awakened from their summer dormancy, than the five months of summer drought.

We expect and are used to the fact that our weather conditions vary from year to year. That is one reason why gardening in a mediterranean climate is so fascinating. A prolonged dry season is not as serious as a winter drought such as occurred in 1999/2000, when we had only 190mm of rain. A number of Pinus halepensis gradually succumbed to disease and were felled the following year. The usual exuberant flowering of wild flowers in spring was a non-event. We were watering the garden in February.

The factors which affect the vegetation are a combination of weather conditions, the poor stony shallow soil, often on bedrock, intense hot winds in summer, burning sun and the high levels of radiation. To a greater or lesser extent all the plants in the garden suffer from stress each summer. The same plant will support this more easily if it has the benefit of some shade or is shielded from the desiccating winds. A clear example of this was the loss in 2008 of a large Rosmarinus officinalis – the third one on the circular ‘threshing floor’ border, planted in the autumn of 2000. I did not water this border at all in 2008 in order to test the drought-tolerance of the plants. The other two rosemarys in this border survived with little damage as they had the partial shade of a Cercis siliquastrum (Judas tree) and the wind was broken by the house and the wall around the sunken garden. However, full exposure to the sun and wind was too much for this very drought-resistant shrub. On the far side of it but with the shade of a large carob in the afternoon, a Cneorum tricoccon and Lavandula dentata lived on. Other losses in this circular border were plants of Convolvulus cneorum, Erysimum ‘Bowles Mauve’, Salvia officinalis, Othonna cheirifolia and Pelargonium tomentosum. 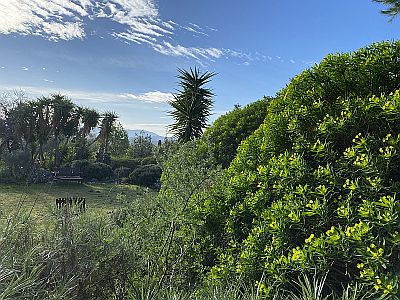 Euphorbia dendroides by the Threshing Floor in February, which will drop its leaves in summer to survive the drought (photo Lucinda Willan)

The policy I adopted in the terraces was to give water to the shrubs and perennials according to their need. My own observation was the only guideline. Water was given almost always in the evening.

Every ten days or two weeks, depending on the wind and temperature, I gave a deep watering to Citrus aurantium, Salvia microphylla, Abelia grandiflora, Pandorea jasminoides, Trachelospermum jasminoides, the various Abutilon species, Podranea ricasoliana and Convolvulus cneorum.
However, most of the trees, shrubs and perennials survived with no irrigation.

The following lists show plants that are never irrigated at Sparoza. An asterisk * marks those which appear to have suffered no stress during the extended dry season of 2008. As noted above, some individual specimens were lost in positions where they received full sun, while others of the same species with a little shade survived. In the summer of 2008, for example, we lost five Cupressus sempervirens; these had been planted in the winter of 2000 and had achieved a height of about two metres. None had the benefit of shade and all were planted on the steepest slope on the hillside.