This article appeared in The Mediterranean Garden No. 54, October 2008

After more than four months without rain at Sparoza I am struck by the beauty of all the dark green evergreen shrubs and trees – the pines, cypresses, Pistacia lentiscus and Kermes oak. How restful they are in the landscape to the eye grown tired of the brilliance of the sun and the intensity of the light. Their contrast with the burnt dried annual vegetation and the dormant, lifeless-looking native shrubs of the phrygana is both dramatic and soothing.

In the terraces of the garden the dark green leaves of box, Phillyrea, Viburnum tinus and Ruscus dominate the lighter greens and grey-leaved shrubs. None of these plants has had any irrigation since the last rainfall in the first week of April and none shows any sign of discomfort or stress.

The three species of Ruscus present in the garden at Sparoza are no longer popular as garden plants in Greece. Is it because they are now found mainly in public gardens in urban areas which were laid out perhaps over a century ago, where they look sad, dusty and unkempt? Is it that they are dull and unadventurous plants that melt into the background against walls or under shrubs, and no one has thought creatively about how to use them as feature plants in the garden landscape? 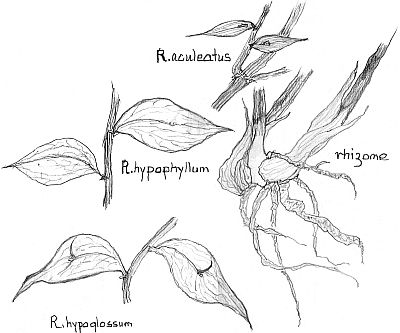 For they are worthy of being used far more generally in a dry garden than they are today. Plants of the woodlands, forests and maquis in Mediterranean regions, they have all the right characteristics for a garden with minimal irrigation as long as some shade is present.

Once a genus of the Liliaceae family but now reclassified in a smaller family, the Ruscaceae, they have some invaluable qualities. They look the same year-round whatever the season or climatic conditions. They are not badly behaved and require no maintenance except in the spring, when each small rounded rhizome with fleshy short roots produces a new stem. If the old stems are cut back as cleanly and as far as possible a fresh new stem appears, giving the whole plant a new dress of soft, light green foliage. For a few weeks as the apple-green shoots mature into the erect yet pliable dark green flattened stems with their elegant lanceolate cladodes – which look like leaves – it is a wonderful sight. Tiny flowers appear on the midrib of the cladode in springtime and if both male and female plants are present these will become glossy scarlet berries in the autumn. The cut stems can be usefully made into brushes for garden paths or outhouses, or used in flower arrangements. 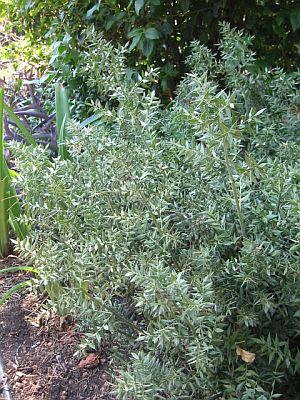 Ruscus aculeatus, the Butcher’s Broom, is the most well-known of the genus. A plant of woodlands, scrub and old forests, it can flourish in the deepest shade. It makes a compact little shrub after a few years and needs no maintenance. The stems branch when they reach about 30 cm and each stem has about 20 small branches bearing elegant oval cladodes with a spined tip. These are quite small, between one and two centimetres in length. On their underside a tiny greenish flower will form in the axil of a papery bract which is the true leaf of the plant. In the autumn the scarlet berry, huge in proportion to the little leaf, will appear.

The third-century BC pupil of Aristotle, Theophrastus, noticed this strange anomaly: “There are three trees peculiar to Mount Ida, the tree called Alexandrian laurel, a sort of fig and a vine. The peculiarity of the laurel is that it bears fruit on its leaves, like the ‘prickly myrtle’: both have their fruit on the midrib of the leaf.”*

Now the Alexandrian laurel is Danae racemosa, a member of the Ruscaceae family. It is an evergreen perennial reaching about a metre and a half in height and is native to southern Turkey, north-west Syria and northern Iran. It is an ornamental shrub with the same botanical morphology as the other species but the flowers are in short terminal racemes followed by a berry. Margery Fish, one of England’s great gardeners, mentions it thus in her book Gardening in the Shade**: “Danae racemosa, the Alexandrian laurel, is an excellent evergreen shrub for under-planting, only 3 ft high with foliage good for cutting.” She also mentions a hermaphroditic R. aculeatus Treseder’s Variety which has many red berries.

There is another species from the island of Madeira called R. streptophyllum. It sounds and looks very like R. hypophyllum but the cladodes are perhaps slightly longer and broader. The leaf is on the upper surface of the cladode. The plant has arching stems and grows in laurel forests. It is not frost-hardy.# 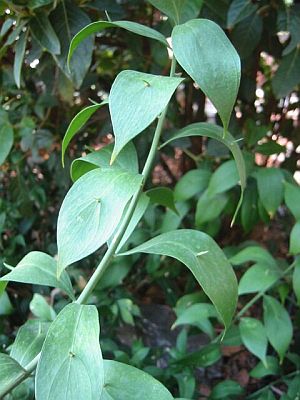 Ruscus hypoglossum was brought to Sparoza by Heidi Gildemeister in 1996, along with many other gifts of plants and cuttings. Of the three species at Sparoza this is the one that I would regard as invaluable in our mediterranean gardens. It has grown happily and vigorously in 12 years into two large clumps under a mature Pinus pinea. Three years ago I took a few rhizomes from the biggest of these plants and they have formed another handsome clump against the terrace wall but still under the canopy of the pine. I hope to divide the two original clumps in the autumn after the rains begin and to pot some up in the nursery for members, as well as planting them in other places in the garden where plants which need irrigation can be removed or put into clay pots to flower, thus reducing the water consumption. R. hypoglossum is such a tidy, architectural plant that I feel sure further plantings of it in shaded areas as a feature on its own will enhance the garden landscape – especially in the long dry months of the year. 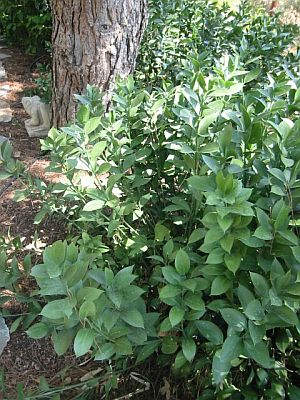 Ruscus hypophyllum is a softer-looking affair – the stems are more arching and pliant and the cladodes longer and wider than those of R. hypoglossum. Its true leaf is not the papery bract but a prominent little projection on the top side of the cladode, which has a more prominent lighter green rib. This leaf – and then the flower and berry – are slightly more than half-way along the cladode’s upper surface.

It seems to me that this plant would look at home on the top of the low terrace walls, arching over them. I shall try some in such a site.

The common name of R. hypoglossum in Italian is bislingua or linguette, with a number of regional dialect names such as sparaciu-miricana, sparaciu spagnolu and sparaciu-i-villa, while R. aculeatus is known as pungitopo, ruscolo and pungiporci, or in dialect spina porci and pungiratto** The Greek common names for R. hypoglossum are lagomíli and agriomersíni. In Cyprus the plant is known as pernári or akromereíni. Theophrastus called it kentromyrríni. (This is the “prickly myrtle” referred to in the quotation cited above; a better translation would be “spurred myrtle”, the spur being the tiny spike or projection on the cladode which is the true leaf.)

I first became aware of Ruscus over half a century ago in my garden in Ireland. We had an Italian gardener who used to gather the soft green shoots in the spring and eat them like asparagus. In Greece we gather the wild asparagus shoots when they are soft and young, as well as those of Tamus communis (briony) and Smilax. Yet I have never heard of Greek people eating Ruscus, nor have I ever come across R. aculeatus or R. hypoglossum in the wild in Greece; yet they are there and known to the people of the land. 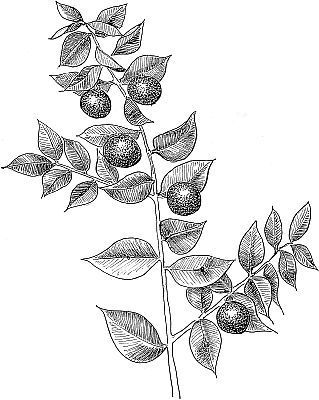 Ruscus will continue to be known to English-speaking gardeners as Butcher’s Broom, I imagine. Is this use of the plant still known?