A Guided Tour of the Garden at Sparoza

The property is bordered by access roads and the dimensions are approximately 50 metres wide by 250 metres long. 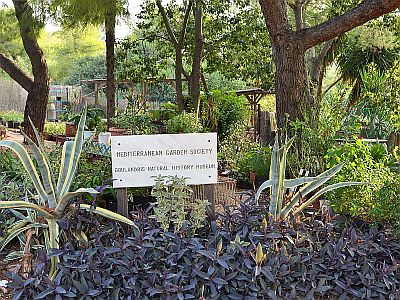 We come into the garden by the main entrance and approach the house. 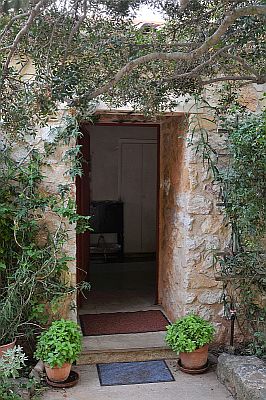 The modest entrance to the house (Photo Rosey Boehm)

The house at Sparoza
To the left of the front door Tecoma capensis and Clematis flammula cover the wall. The bed is narrow and dry and includes Ceratostigma plumbaginoides and Duranta erecta that are happy in these conditions. The duranta provides colour from its flowers or fruit for almost six months. 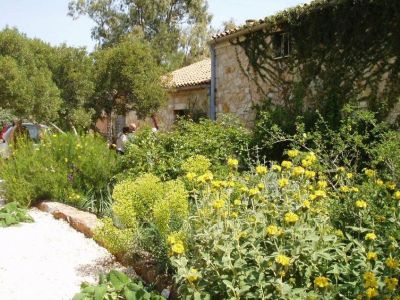 The "Shrubbery"
To the right of the front door is the "shrubbery" is a wide bed with roses including large specimens of ‘Iceberg’ and Rosa hugonis planted by Jaqueline Tyrwhitt in the early 1970s as well as tender plants that benefit from the sheltered position such as Melianthus major and Plumbago auriculata.

Shading and framing the front door is an old Pistacia lentiscus beautifully shaped into a tree. Sally planted Hardenbergia violacea, an Australian native in 2018. 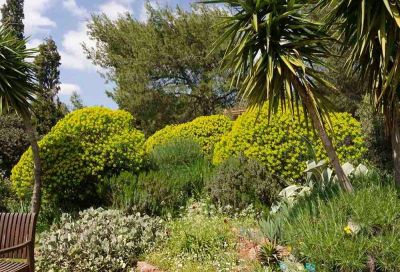 The “Desert"
The area dividing the "threshing floor" from the gravelled entrance to the property is generally known as "the desert" because of its extremely dry and inhospitable conditions; it includes Pinus halepensis, a huge Agave Americana more than 40 years old, a towering single-trunked Yucca, taller than the pines and home to many nesting birds, Iris germanica and the impressive Eurphorbia dendroides covered in lime-green inflorescences in spring then bare and dormant in summer. 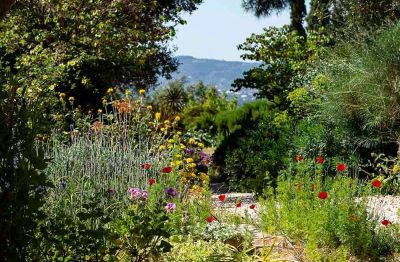 Path to the “Threshing Floor” and the "phrygana", with the hills of Attica beyond (Photo Alisdair Aird) 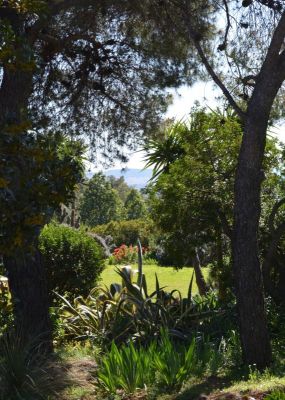 The "Threshing Floor"
This area is not a true threshing floor it but has been given this name because in size and shape it resembles a traditional Greek threshing floor. It is a circular flat area, approximately 15 metres in diameter, consisting of what was once a lawn and is now managed as a dry meadow, surrounded by a border of drought-tolerant shrubs and sub-shrubs. This meadow does not receive any water and is mown in early summer after the wild flowers in it have set seed. Particularly worthy of note in the surrounding beds are the large mounds of Ptilostemon chamaepeuce, a Greek native plant with narrow leaves and mauve thistle-like flowers in spring. 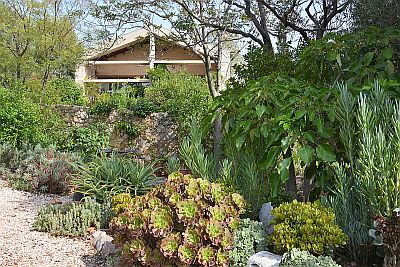 The cactus and succulent garden
This lies between the “threshing floor” and the phrygana area with a couple of grand Yucca elephantipes towering above the cacti and succulents including Cotyledon orbiculata, various aloe species. A very slow growing Agave victoriae-reginae, was planted by Sally in the early 1990’s. 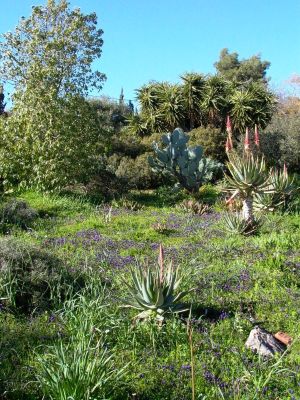 The phrygana area
This area, sloping down towards the south, is managed as a wild garden and includes the largely spring-flowering spontaneous flora (e.g. Asphodelus aestivus, Iris tuberosus, Anemone coronaria) as well as added plants that like its dry and sunny conditions including many species of Aloe (winter-flowering) and Amaryllis belladonna (autumn-flowering). In autumn it is full of Cyclamen graecum, Drimia maritima and Scilla autumnalis. At the entrance to this area is a small stand of Quercus coccifera pruned into trees, in their shade are a few Mandragora autumnalis. We then meander along the path between three of the Brachychiton populneus trees planted by Sally from seed.  There are drifts of Iris germanica and in the autumn bright yellow Sternbergia as well as some beautiful olive trees planted by Jackie.

Turning back towards the house we enter a favourite area of the garden. 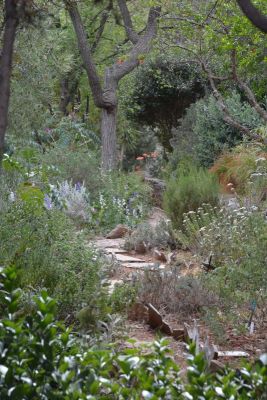 One of the three terraces (Photo Rosey Boehm)

The terraces
The terraces are cool and shady as well as areas of full sun. There are many original trees planted by Jackie, the pomegranates (Punica granatum), an orange (Citrus aurantium), Ulmus parvifolia, Phillyrea latifolia and a Pinus pinea. There are Ruscus hypophyllum growing very happily under the dry shade of the pines, and Dicliptera sericea with its orange flowers for almost six months of the year. The cypresses (Cupressus semprevirens) standing tall as sentries, were planted as windbreaks for the Terraces.  It is a garden of constant change through the seasons where there is always a plant of interest in full bloom. It is also a quite meandering garden and a place to sit on the beautiful stone walls, again a feature built by Jackie: mature trees frame the vista along the walks.

Here a large variety of mediterranean plants from different parts of the world are grown; there are far too many to list here but they include several different species (and some cultivars) of Salvia, Teucrium (T. fruticans ‘Azureum’) and Lavender (Lavender dentata) as well as bulbs, such as the South African Haemanthus coccineus and the Greek natives Bellevalia dubia and Fritillaria obliqua. The terraces offer visual interest in every single season of the year. A narrow path runs along the top of each terrace and two flights of steps divide them.

Above the terraces to the north lies a bed containing plants that thrive in extremely dry conditions. These include fine old specimens of Ebenus cretica, a Cretan endemic, and Euphorbia acanthothamnos, both planted about 40 years ago.

Above the terraces to the south a shade garden is home to, among other plants, hellebores (Helleborus foetidus and a cultivar of H. orientalis) and Liriope muscari.

The retaining wall of the house veranda above the top terrace supports a Rosa ‘Mermaid’, while a huge Rosa banksiae ‘Alba Plena’ with double white flowers grows over the ramp leading down from this veranda to the shade garden along with Plumbago capensis and wisteria. 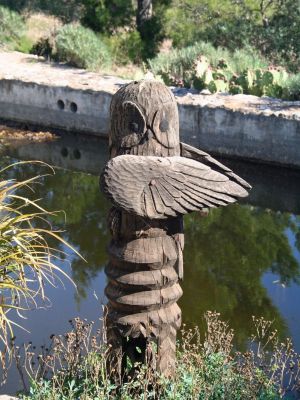 "Derek's garden"
This east-facing garden situated between the terraces and the pools was made in the 1990s by Derek Toms, one of the instigators of the MGS, and is named in memory of him. It covers the slope equivalent to the three terraces and is home to Greek native plants including many bulbs, Tulipa saxatilis, Crocus cartwrightianus, tiny Narcissus absolutus and Convolvulus oleifolius. The mandrake (Mandragora officinalis) does well here. A totem surmounted by an owl, carved by Derek Toms, stands watch at the edge of this garden, overlooking the pools. "Derek's garden" receives no irrigation in summer. Providing shade and structure is a Cupressus arizonica, a striking tree with blue-grey foliage and peeling red bark. 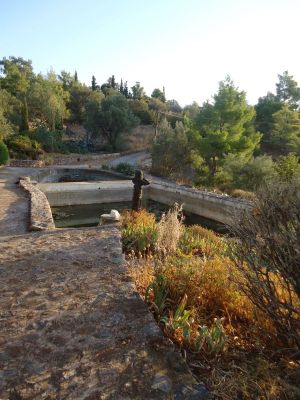 The pools
The two adjoining pools are home to water-lilies and the white-flowered Aponogeton distachyos, as well as to a tiny mosquito-eating species of fish and frogs. Water lost to evaporation during the summer is not replenished but the pools are left to refill naturally with the winter rains and the run-off from the hillside above them. The pools are a type of wetland and provide a valuable source of water for the animals and insects in the garden. 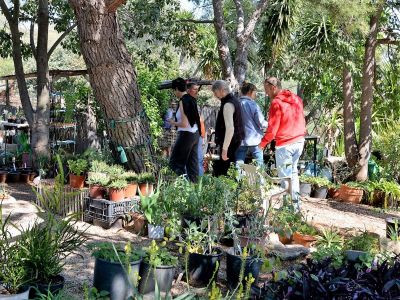 The nursery
The nursery lies at the working heart of Sparoza, for it is here that plants are raised for the garden. Plants are occasionally purchased, or received as gifts from members, but most of the new planting at Sparoza uses species that have already been tested in the garden for their ability to do well in its hot, dry conditions and have then been propagated and raised in its own nursery. Seeds and cuttings collected by Sally Razelou or offered by members are also nurtured here for subsequent trial in the garden. 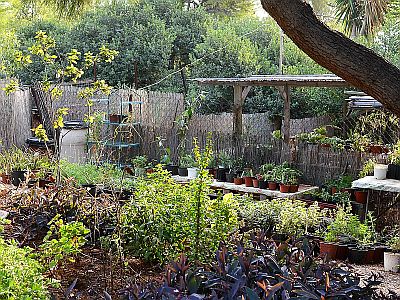 The nursery is situated to the west of the house. It includes a fenced propagation area, secure against stray dogs and wandering tortoises, partially roofed with split bamboo matting for shade. This area also contains the frames constructed by Peter Dinning in which seedlings and cuttings are sheltered until they are ready to be moved out into the open. 'The open' in this case means the outer part of the nursery, shaded by a pine, a Judas tree and a Brachychiton and terraced with low stone walls, where the propagated plants are grown on in neat rows of plastic pots.

Much of the potting compost used in the nursery is generated from the compost bins at Sparoza.

Twice a year, in autumn and in spring, a plant exchange is organised when plants surplus to the needs of the garden are made available to MGS members in return for a small donation.

We now double back on ourselves to visit a more private garden space. 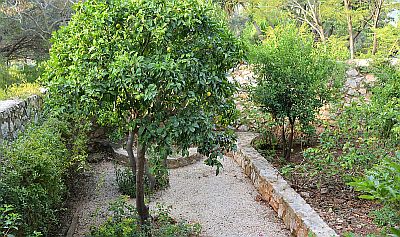 The walled garden
A walled sunken garden on the south side of the house is accessible only from the south veranda; in it grow citrus fruit trees, a bay tree and climbers such as bougainvillea, Podranea ricasoliana and Trachelospermum jasminoides. The south veranda itself is covered by two magnificent wisterias and houses a collection of pot plants including the night-flowering Epiphyllum oxypetalum.

Returning outside we head up to the hillside. 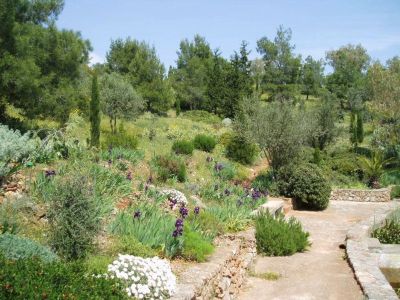 The hillside
The hillside, over which winding paths have been made, is a wild garden where the spontaneous flora is encouraged and added to selectively. To the existing olive trees other trees have been added (pines, cypress trees and carobs). A great many annuals self-seed here as well as bulbs, both spring flowering Muscari neglectum, M. comosum and autumn-flowering Urginea maritima, Sternbergia lutea and S. sicula and Cyclamen graecum. Newly-planted trees are watered once a week during their first two summers; apart from this, the hillside receives no irrigation at all. In the winter of 2001 Sally and Jennifer Gay planted 50 Cupressus sempervirens, these were watered for the first five years. They provide wonderful focal points and structure upon the hillside.

Winding paths were created by David Priestley and Jennifer Gay in 2001. The paths provide access to these areas to view the carpets of flowers in the various seasons, including Scilla autumnale, Papaver rhoeas, Muscari commutatum. There is a vehicle track up the hill where we reach the furthest boundary of the garden and look out towards the mountains. 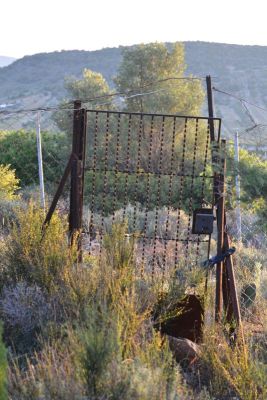 Rusty gate leading out from the hillside (Photo Rosey Boehm)