Photographs to illustrate the article published in The Mediterranean Garden No. 100, April 2020

Andrew Sloan has been growing lithops, commonly called “living stones”, for the last two years and would like to share his experience. He writes:
The name lithops is derived from the Greek word lithos (stone) and opsis (appearance) and was given to these plants on account of their similarity in colour and appearance to the stones and pebbles around them in their natural habitat. The plants thus blend in among the stones as a means of protection since grazing animals, which would otherwise eat them in periods of drought to obtain moisture, usually overlook them. 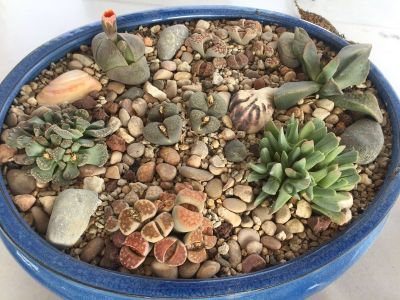 The genus Lithops belongs to the Aizoaceae family of plants better known as Mesembryanthema. Lithops species are widely distributed in South Africa and Namibia, usually in drier to very arid desert regions with low annual rainfall of 50-200 mm. There are 36 species and numerous subspecies amounting to 145 varieties as well as many cultivars. Within many of the same species there is a marked variation in the patterning on the leaves and even the colours which are generally mottled brown, green or grey. Lithops could not survive in many areas were it not for their capacity to store water. The body of the plant is divided into two succulent leaves fused together in the shape of an inverted cone, with a central fissure dividing the two leaves and a taproot joined at the base. The leaves are thick enough to store enough water for the plants to survive without rain for months. The bodies usually divide creating a clump. 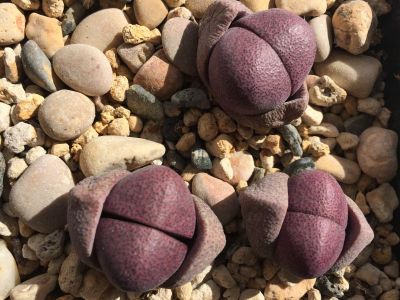 Lithops optica 'Rubra': rare in habitat but common in cultivation and one of the most sought-after lithops

The two most important elements in growing lithops are to provide a well-lit location and a correct watering regime where the plants are watered thoroughly at the beginning of the spring and autumn growing seasons and left dry in winter and summer. Lithops need a lot of sunlight, without which they become elongated. Many collectors in Northern Europe grow them in greenhouses which they ventilate in the summer and heat and light in the winter. For a small collection a south-facing window sill is ideal. I have my plants in southern Spain inside an open, tall garage facing south-east so that they receive sunshine all morning and a shaded, bright light in the afternoon. Because they are under a roof they do not receive any rain, so I can control the watering regime. Temperatures do not generally go beneath zero here, which lithops would not tolerate, so it is a good climate for growing them outside provided they are protected from winter rain.

Winter
I am writing this in the winter which is a time when the outer leaves shrivel and new leaves appear, with the water inside the old leaves being transferred to the new leaves. 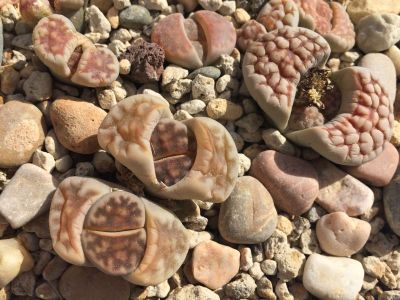 Lithops in winter. Outer leaves shrivel and new leaves appear with the water inside the old leaves being transferred to the new leaves

It is fascinating to see this take place. In their natural environment there is no rain at this time of year, so no watering is required. The soil should remain bone-dry no matter how shrivelled the plants become. 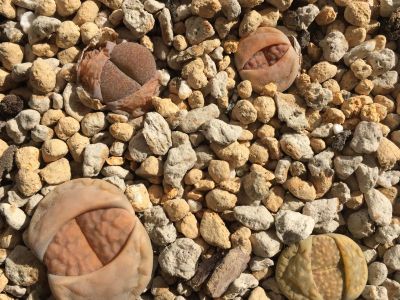 Lithops in winter getting shrivelled 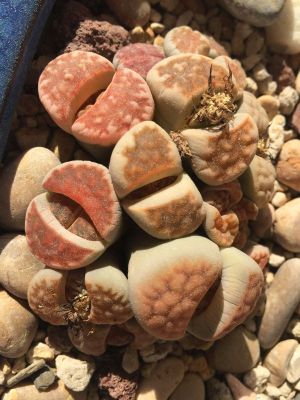 Lithops in winter starting to split

Spring
After their dry winter rest the old leaves are reduced to thin papery shells which can eventually be removed with care from around the plant. It is spring by the time the plants reach this stage (April for me) and they should now be watered thoroughly a few times, saturating the pots but letting them dry between each watering. The leaves will plump up, allowing the plants to get through the hot summer with no or minimal watering.

Summer
During the summer months lithops become dormant. Regular watering during this period would cause them to rot and turn into mush. If a marked shrivelling occurs during this time, it is safe to water lightly in order to restore the firm appearance of the plant. Never water deeply when the plants are dormant. When in doubt do not water. These are among the most drought-tolerant plants on earth. 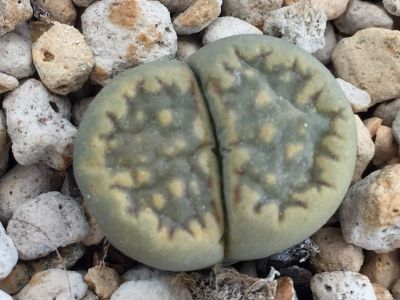 Autumn
The second growing season is the autumn. When the temperatures begin to drop the plants wake up from their summer dormancy. Water again thoroughly several times; this gives the plants energy to flower. The fissure between the leaves begins to separate and a bud will force its way up leading to a lovely, relatively large white or yellow flower which opens up in the afternoon for one to two weeks. (See photo at the top of this page). Lithops must usually be three years old before they begin flowering. The seed capsules of lithops, like those of other mesembs, are hydrochastic: they open only when they become wet. This is a protective seed-saving mechanism that allows seeds to be exposed and washed out only during rainy weather but can be used in cultivation to access the seeds.

Seed germination
I found my first lithops plants (Lithops karasmontana) at a local nursery garden two years ago, inspired by seeing them in Robin Frandsen’s excellent book Succulents of Southern Africa. Since then I have grown different varieties from seed sourced at ozlithops.com (Australia) and mesagarden.com (USA), both reliable sources. Germination of lithops seeds is best done in spring when temperatures are above 20 degrees C using the plastic-bag method commonly used for all succulents.

I sterilise my mix of 70% pumice and 30% cactus potting soil in a microwave or oven, let it cool and put it in some seedling pots, scatter the lithops seeds on top and lightly cover with some more sterilised river sand or gravel which will provide support for the seedlings after germination. I soak the pots in a cat litter tray (naturally empty of cat litter) to water from beneath so as to not disturb the seeds and after draining off the excess water put them inside a clear plastic bag which I close and place in a light but not sunny spot. Healthy seeds germinate fairly quickly and the bag can be removed. 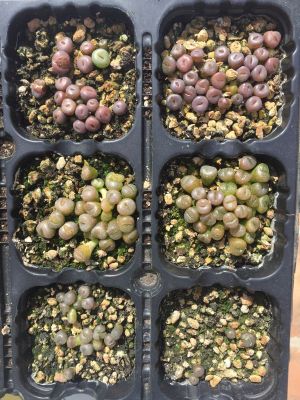 The small seedlings should continue to be watered from beneath on a regular basis. The soil mix should not dry out completely but should not be soaking wet all the time as this can cause rot. I have had such a good germination rate from my last bunch of seeds from ozlithops that I currently have about 100 seedlings of six different species, of course far too many for my own needs but useful credit for plant-swapping when they are big enough.

After one year the plants should be ready to be transplanted, best done in the autumn or spring. Lithops plants grow in a very poor, rocky soil in Southern Africa so it is best to use very little organic material. I use pots 10cm deep to allow room for the taproots with a mix of 90% pumice and 10% cactus potting soil. Alternatives to pumice include gravel, coarse sand, granite or crushed brick but it is important to maintain the high percentage of inorganic material. 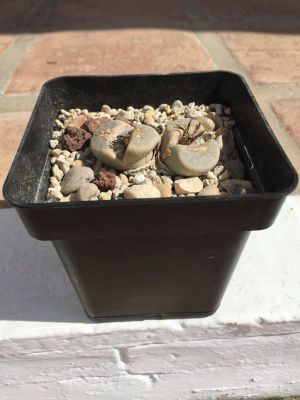 10cm deep pot. It is important to have sufficient depth for the long tap roots

I am getting a lot of pleasure from growing lithops and watching their seasonal changes. When I show visitors around our succulent garden the lithops plants attract a lot of attention, especially in the large pot we have on our covered south-facing terrace where I have placed three different lithops as well as other “living stone” plants like Pleiospilos and Aloinopsis with real stones and pebbles. Visitors often have to touch the plants and stones to find out which is which. Facebook has a group called Love lithops which, apart from lots of photos from collectors all over the world, has some good information on growing lithops in the files section at the top. There are some very good sites on the web as well, my favourite being www.lithops.info.

A final summary: lots of sunlight and developing the seasonal watering regime which mimics their natural environment is the best way to get good results.