Photographs to illustrate the article published in The Mediterranean Garden No. 102, October 2020

Marie Ruffier-Monet recently spent three months in the garden of Sparoza assisting its long-time caretaker, Sally Razelou. She writes: “During this wonderful experience many thoughts kept recurring and it finally seemed time to commit them to paper. Although these ideas were conceived in the garden here, I wonder whether they can be extrapolated to mediterranean gardens at large.” 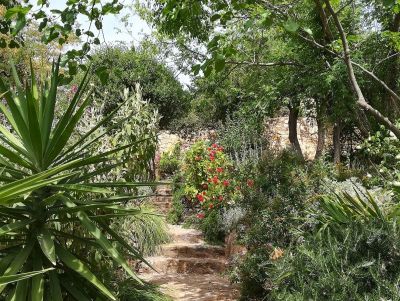 A view of the steps climbing to the Terraces of Sparoza, framed by Yucca elephantipes

Regardless of the region or vegetation or aesthetic approach, the fundamental problems that designers face are all very similar. Perhaps the most ubiquitous challenge is designing for the off-season. We often hear talk about “four-season gardening” and typically the implication is some adjustment of winter management - architectural grasses, persistent fruits, borrowed bulbs, decorative seed heads: anything to avoid leaving eroding empty beds. This is the way the off-season is treated in much of the Northern Hemisphere; but gardening in Greece, where the dormant period is in summer, feels a bit like switching hemispheres.

When I spoke of this to Sally, she explained that the garden is completely different during the summer, and that heat and drought are more intense and prolonged here than in the South of France. Having been spoiled by the opulence of the Greek late winter and spring, it’s hard for me to imagine the full impact of this natural process on the garden’s design, but already the disappearance of the Oxalis after weeks of weedy torment has led me to think about empty space. 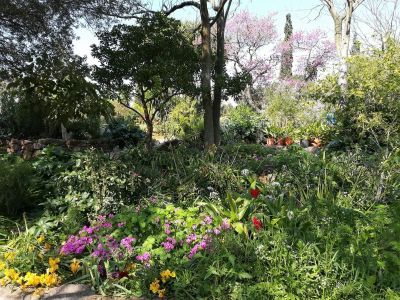 The woodland in bloom at the end of spring: Freesia 'Aladin', Oxalis articulata and poppies. Cercis siliquatrum in the background

As in art, empty space is a fundamental part of composition in the garden. Its function and its feeling may be tied to its name. Commonly referred to as negative space, this passive feature is the breath between plants, creating definition for exuberant shapes and helping the busy eye to rest. Truly empty space is more active and asks more of the eye. It makes us search for nothing in particular – the empty “space” itself is rather undefined, an amorphous vacuum suggested by imbalance. The role of the designer is to soothe all of these elements to the desired harmony and sensibility. They are ultimately the tools of light and shadow. 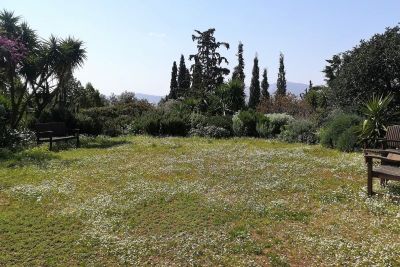 The true challenge is not so much the realisation of harmony at any given moment but rather the design’s continual anticipation of succession or progression. During the garden’s most dramatic transitional moments (autumn in many regions, late spring in Greece…), the garden progresses in its succession through subtraction. In the grand shifts of spring, this moment’s mirror across the solstice, the gardener fills absence with promises: pea sticks and contour and bare soil become an audacious pact with the visitor. But we meet the dormant season differently, as indeed we should. As Caroline Harbouri reminds us in her article on Sparoza in TMG 100, it is counterproductive to challenge natural events with excessive artifice. So how do we design for this occasion? We look to nature. 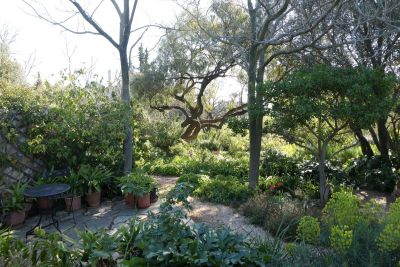 The patio and the woodland border

In response to the oppressive heat and harsh drought of Greek summers, the key component of the mediterranean garden has evolved in its landscapes, namely tough shrubs and sub-shrubs: Cistus, Thymus, Teucrium, Sarcopoterium, Santolina, Lavandula, etc.

Several features unite these specimens.Branched, dense, evergreen, sculpted by the wind and salt, suppressed by the heat and sometimes grazed, these stolid woody plants keep their cool through it all. Growing low and wide-spreading, these wild shrubby tangles create their own ecosystem, a shelter of self-defence in a seasonal desert. Their tight branching and low profile help them to trap water for themselves, but this structure also serves an important ecological role, regulating soil temperature, mitigating erosion and creating a habitat for wildlife. 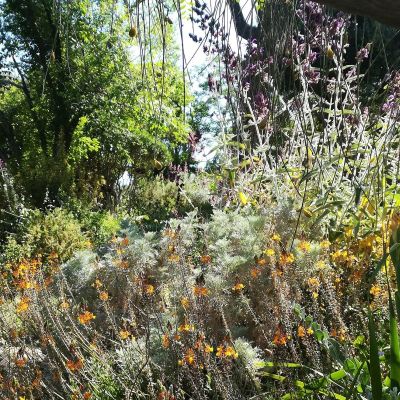 In the light shade of Retama raetam, Bulbine frutescens contrasts with Artemisia arborescens

During the more temperate growing season from autumn to spring, these plants remain the bones of the mediterranean garden. Much more than their ephemeral neighbours, they support the design dynamics as vehicles of density and contrast, not to mention consistency over time. Condensed by a light trimming (an attempt to recreate the wild growing conditions), these anchors create the foundational rhythm of the garden, but they function too as our negative space as mentioned above, giving flowers legibility and context. When the seasons turn, shrubs remain and the negative space flips, becoming everything that was once coloured around them, an inversion of focus and flower. 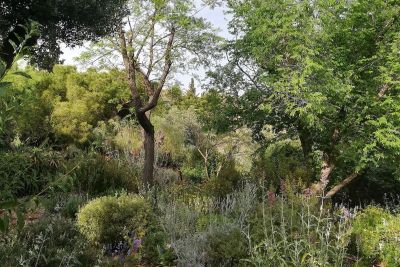 Regardless of the design intentions, an understanding of the strategies of shrubs and sub-shrubs is fundamental before one begins to prune or one could easily kill the slow-growing plants. As the cultural conditions are often tough for these species, the tender new growth will be modest. Pruning should be applied only to new growth, leaving old wood untouched. The shrubs should be shaped regularly (which is not to say frequently) so as to keep them compact. If you find yourself harassing the plant to maintain its scale, it might be best to consider a variety better adapted to the desired height; otherwise, an annual treatment should suffice. 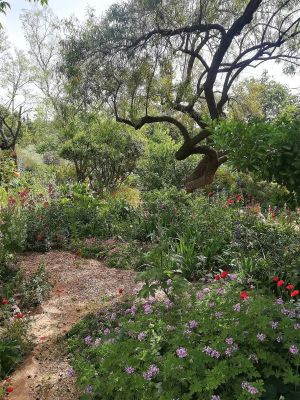 A view towards the woodland border with Pelargonium quercifolium

With these lessons in mind, I started to trim the wild thymes in the 'maquis' at Sparoza in the hope of building their interactions with the blooming Phlomis fruticosa. The ‘maquis’ is one of the transitional areas in the garden, drifting between cultivation and wilderness. These thymes, growing wild, function too as transitional devices. They are the language of their wild surroundings, but we are tending them, domesticating them almost, thus creating a gesture of integration in our focal plane. 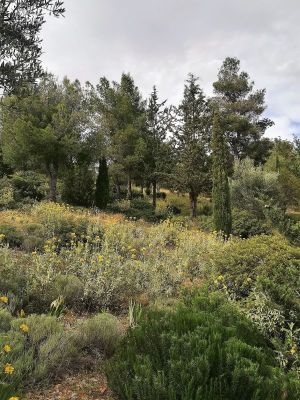 Phlomis fruticosa in bloom on the Maquis

Since I arrived at Sparoza, there has been a specific spot in the garden that I visit almost daily. Following the 'maquis walk', halfway up the hill, I perch next to the cypress and face south-east towards the mountain massif. This place gives me peace and contemplation. In meditation, I’m arrested with memories. 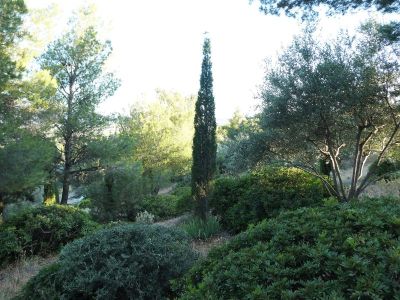 I grew up in the area of Perpignan, in Languedoc-Roussillon with a view of Mount Canigou in the French Pyrenees. This outstanding horizon, with its summit at 2784m, made somehow ordinary by familiarity, became significant when I moved to the Montpellier plain to pursue my studies. It was obvious to me that something was missing in the horizon. The feeling of having lost my Canigou made me uncomfortable for a long time.

The lingering feelings of my French horizon have given me a gift here in Greece. My pilgrimage along the maquis path takes me to an event, a moment. We meet like this: first the sky; the blue horizon of mountains; the plains, divided by the Attiki road; a ray of Cupressus, a cloud of olives, two of which frame the pool below; currents of Phlomis, thyme and lentisk. 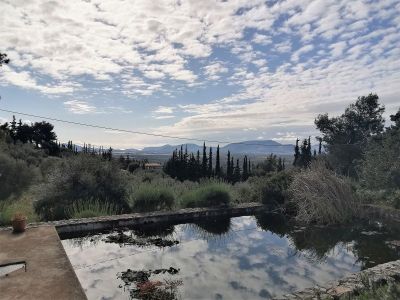 Capturing the glint and mood of the sky, I see the pool borrow blues from its neighbours. Focused by silver olives looking out over it, the pool catches my attention and then forgets itself. It becomes the imaginary reflection of the mountain massif, a piece of mountain - not its trees but the mountain itself (my Canigou) - within reach. I wonder whether Jaqueline Tyrwhitt thought about it when she designed the garden. I wonder whether you will when you visit Sparoza.