Rainfall and watering at Sparoza

Sally Razelou writes:
We are all familiar with the basic characteristics of the mediterranean climate: a hot, dry summer and rainfall concentrated in the winter months. Yet the unpredictability of the month-by-month rainfall is less often mentioned. This is one of the things that makes mediterranean gardening so fascinating. 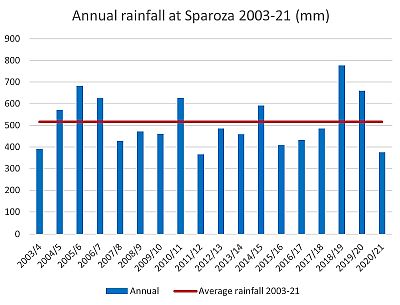 In 2016 there were concerns that climate change might be causing a consistent reduction in rainfall. But then Sparoza received bumper rainfall in 2018/19; I wrote about this in an article entitled Annus Mirabilis in issue no. 97 of the Journal.

However, annual averages by no means tell the whole story. From year to year the monthly rainfall has varied over a very wide range, as shown in the following chart:

Monthly rainfall at Sparoza: range of maximum/minimum and average over the period 2003 to 2020 (mm) 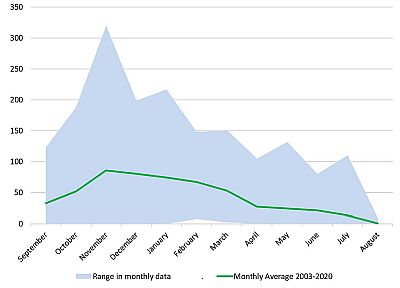 While most rain is expected to fall in autumn and winter, this has not always been the case, as illustrated in the chart below. The year 2003/2004, for example, was remarkable for the fact that no rain at all fell in September and October 2003, followed by no rain at all from April to October 2004. Similarly July 2005 and July 2018 were exceptional for their rainfall (63 and 110 mm respectively) since this is usually a completely dry month. No rain fell in January 2007, although there was snow. We had record amounts in September 2018 (123 mm) and again in January and April 2019 (214 and 105 mm respectively). 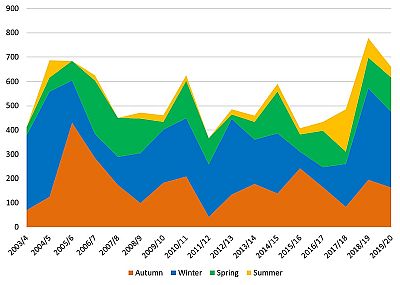 Mediterranean plants are prepared for the dryness of the summer months but are subject to great stress if the autumn rains arrive late, as in 2003 and 2011, or if the winter rainfall is exceptionally low. This was seen in winter 2015/16 when only 130mm of rain fell between the months of November and February and we were watering the garden of Sparoza in February. In 2000 the spring flowers failed to appear on the hillside. Plants are also in trouble if the first autumn rains are followed by a month or more of drought. This occurred in autumn 2008: 33mm of rain fell on three consecutive days in the third week of September, encouraging plants into new growth, after which no more rain fell until half-way through November. 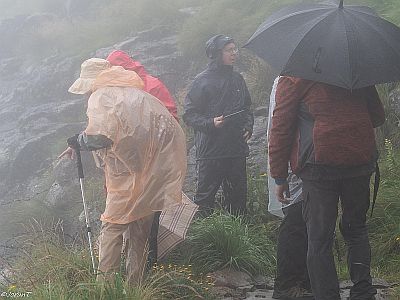